"It's normal. He's young, these kind of things can happen."

Aleksandar Mitrovic has forgiven Aboubakar Kamara for almost costing Fulham victory against Huddersfield by seizing and missing the late penalty the Serbia international should have taken.

Kamara argued with Mitrovic, the club's designated penalty taker, and appeared to have cost them a vital victory when Terriers goalkeeper Jonas Lossl saved his kick to keep the match goalless.

Fulham manager Claudio Ranieri was so incensed he is considering dropping Kamara for Tuesday's fixture at Arsenal, but Mitrovic, whose stoppage-time finish ultimately earned the Cottagers the three points, was in a more forgiving mood.

"He's a striker, he's hungry for goals as well, maybe he wanted to score as well and he scored his last penalty," the striker said.

"It's normal. He's young; these kind of things can happen. It's normal.

"You need to take care of each other. We had a bit of an argument but in the end he took the ball and I wished him luck and told him to stay focused and score. That's what he'd do as well. 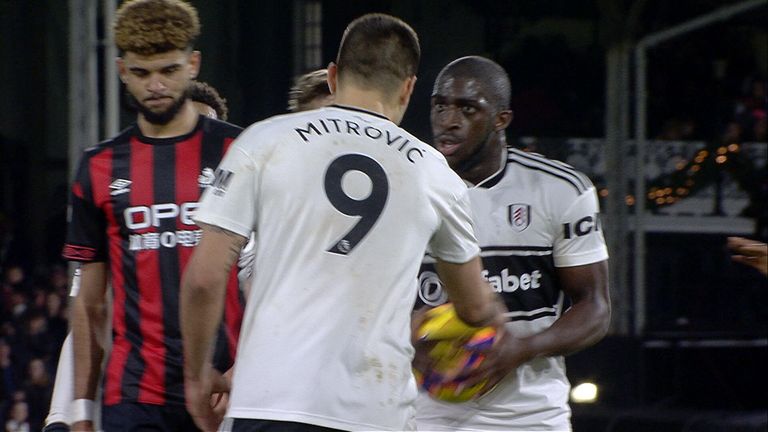 Aboubakar Kamara and Aleksandar Mitrovic got in a heated dispute over who should take Fulham's late penalty against Huddersfield, but how did it all end?

"If he'd scored I'd have celebrated with him, like I scored. The most important thing is we got the three points and everything is behind us."

Mitrovic, who revealed he had been suffering with a fever in the days prior to the game, added: "It was a six-point game. It was a big win. We felt it was a lot of pressure during the game, and in the end, after the goal it was a big
release." Fulham boss Claudio Ranieri says he was relieved after his side's late win but was disappointed with Aboubakar Kamara, who took the ball of Aleksandar Mitrovic for Fulham's missed penalty

Ranieri fears the knee injury suffered by Alfie Mawson could prove "serious", but was delighted to see Mitrovic end his six-match goal drought.

"He knows that there are moments where you score every match and there are some where you have to wait," the Italian said.

"But I have never seen him nervous - he is always calm, working well in training and this is for me the best medicine."