The 24-year-old has only made one start for Chelsea this season so far and will be looking for more game time, as he seeks to regain his place in the England squad ahead of the Euros next summer.

Loftus-Cheek has been capped 10 times by England and went to the 2018 World Cup.

However, injury has hampered his progress since then, leading to him dropping down the pecking order at Stamford Bridge.

Loftus-Cheek told Fulham's website: "I'm really happy to come 'next door', if you will!

"I watched Fulham at the start of the season and they looked like they're playing decent football. With this manager, I think I can get back to my best football. That's the main thing for me, to find my form and help this team win games."

Loftus Cheek was given a start in Chelsea's opening game of the Premier League season at Brighton, but failed to impress and has not made an appearance since. 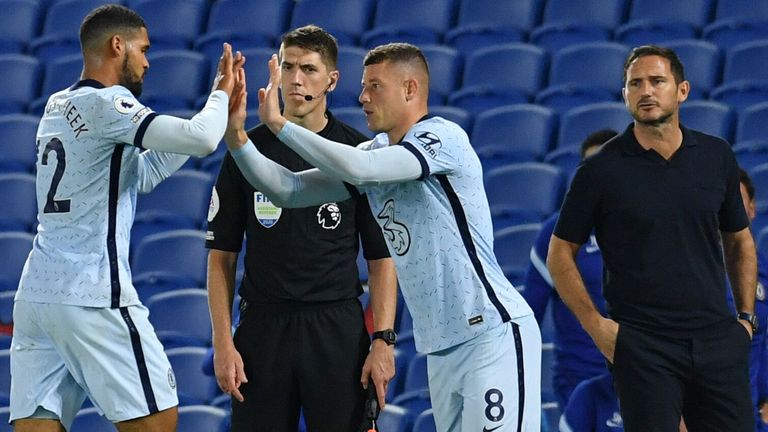 Fulham were keen to strengthen their squad, having yet to register a point from their four Premier League fixtures this season, following promotion from the Championships via the play-offs.

Loftus-Cheek becomes the latest Chelsea midfielder to be loaned out during the final week of the summer transfer window, following Ross Barkley and Tiemoue Bakayoko, who sealed a move to Napoli earlier on Monday.

Fulham also added two centre-backs late on deadline day, with Tosin Adarabioyo joining on a permanent deal from Manchester City and Joachim Andersen on a season-long loan from Lyon.

Adarabioyo, who has had loan spells in the Championship with West Brom and Blackburn since coming through Manchester City's academy, joined Fulham in a deal worth £2m.

Fulham will pay £1.5m up front for the 23-year-old with the rest to come in add-ons, while Manchester City will receive 20 per cent of the fee if Fulham sell Adarabioyo.

"I felt like the time was right to leave [Man City] and push on. It was the right time in my career to move on and hopefully get a lot of Premier League games."

Danish international Andersen has agreed a season-long move to Craven Cottage from Ligue 1 side Lyon.

The 24-year-old, who began his professional career in Holland with Twente, has only been at Lyon for one season after joining from Serie A side Sampdoria last summer.

"I'm looking forward to playing in the Premier League and playing for a nice club like Fulham.

"It's a league I've been following since I was a child and it's a big, big dream to play in the Premier League, so I'm looking forward to it."

Fulham will hope the signings can bolster a defence that has conceded 11 goals in their opening four games of the season.