Wolves striker Raul Jimenez visited the club's training ground on Wednesday for the first time since undergoing surgery on a fractured skull; Nuno Espirito Santo says club have set no timeframe for his return 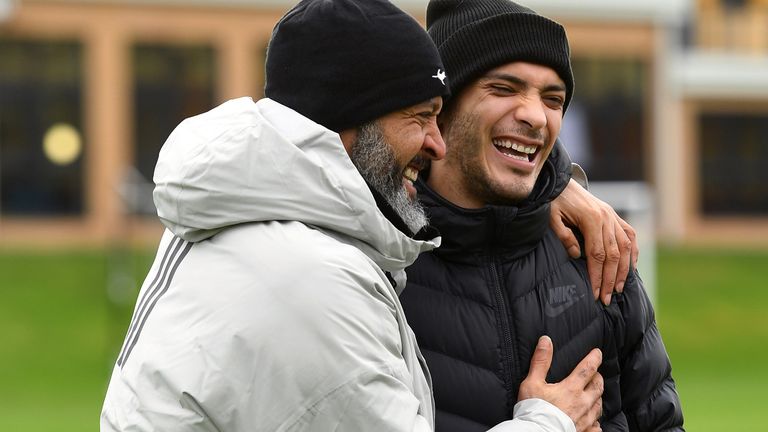 Wolves head coach Nuno Espirito Santo says the visit of striker Raul Jimenez at the club's training ground on Wednesday has given the squad 'a big lift' after the Mexican underwent surgery on a fractured skull.

Wolves head coach Nuno Espirito Santo says the visit of Raul Jimenez to the club's training ground this week has provided "a big lift" to the squad.

Jimenez is recovering after undergoing surgery on a fractured skull following a clash of heads with Arsenal defender David Luiz in Wolves' 2-1 win at the Emirates on November 29.

The Mexico international greeted the club's coaching staff and his team-mates at Compton Park on Wednesday, following his release from hospital last weekend.

"I think it was a big lift for everybody involved that was aware of the situation to see him, [after] how bad the situation was, again smiling," Jimenez said.

"Of course, a huge lift for the team-mates because they see someone that had a serious situation, [now] recovering and seeing that he is on his way back to be the same person that he was."

Espirito Santo says the 29-year-old striker is "starting to get ready again" but said the club would take their time over his return.

"In this situation we don't have a timetable," he added. "We have to follow the protocols but mainly it is about getting him healthy again so there is no rush, we have time.

Wolves face Aston Villa at Molineux on Saturday as they bid to bounce back from their 4-0 defeat, in Jimenez's absence, to Premier League defending champions Liverpool on Sunday.

Wolves players wore T-shirts with messages of support for their team-mate before that game at Anfield.

Jimenez, who joined Wolves from Benfica initially on loan in June 2018 before signing permanently for £30m in April 2019, has scored four goals in nine Premier League appearances this season.