In an exclusive interview with Sky Sports, Wolves’ new signing Hwang Hee-chan reveals why he is known as The Bull, opens up on the COVID-19 issues that complicated his stay in Germany and why he is ready to make up for lost time in the Premier League...

There could hardly be a more appropriate nickname for a player hoping for hero status at Wolves. Steve Bull scored 306 goals for this club. They named a stand after him. Now Hwang Hee-chan is here, known as The Bull, and already off the mark.

Hwang's goal at Watford makes him the only man to score a Premier League goal for Wolves so far under Bruno Lage. Inside the dressing room at Molineux for his first interviews, the new loan signing from Leipzig reflects on that moment, that nickname, and more.

"It was an honour for me to score a goal on my debut, especially in the Premier League," he tells Sky Sports. "It has been my dream to come here since I was little. I was very happy and I really appreciate the people who helped me to move here, including my family." 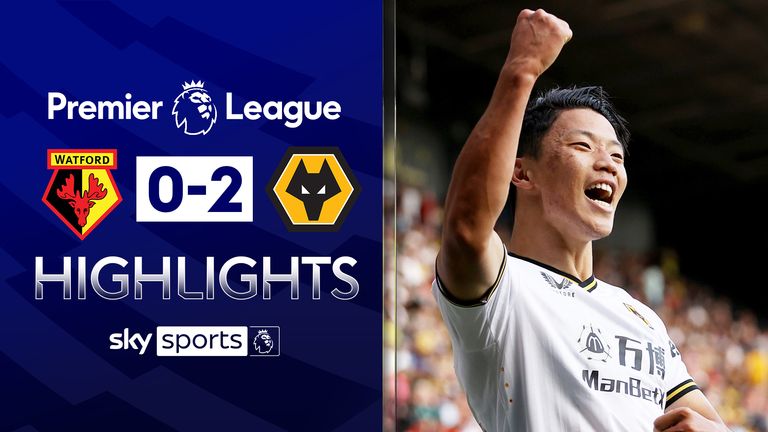 Speaking through a translator, the move to Wolverhampton is a culture shock for the South Korea international in some ways. For now, he is living alone. "My mum is ready to move here from Germany," he says. "Once I find a house she will come."

In other respects, Hwang is a man-made for the Premier League. His arrival at Wolves had been mooted for almost two years and he has shown already in his cameo appearances off the bench that he has the energy and the quality to make an impact.

The physical demands will not be a problem for The Bull.

"I don't know where that name came from, it started just like that. Maybe it is my playing style, I am aggressive and I try to break through any opponent who is defending me. I think that is what the fans expect. I want to show that for them in my performance."

But does he agree with the description?

"I do. My way of playing is quite aggressive and fearless. Especially when I watch myself playing on television, I can understand why they call me The Bull."

It was at Salzburg that he first garnered attention. Perhaps you recall his goal against Liverpool in the Champions League, leaving Virgil van Dijk on the deck before lashing the ball into the far corner of the net. Jurgen Klopp called him a machine.

Salzburg were briefly the talk of Europe as Erling Haaland and the rest blew away the Austrian Bundesliga and caused problems for the continent's elite. Hwang was the selfless foil to the star striker - humble enough to know who the main man was.

"Erling plays the perfect football game and you feel his energy, he exudes it and every player in the team can feel it. You can see that energy at Dortmund now as well."

It is that schooling in the Red Bull way - attacking football with an emphasis on the high press - that makes Hwang such an attractive option for a club like Wolves. Here, he may be the newcomer, but, in another sense, he is also ahead of his team-mates.

Most of the group were accustomed to sitting back, defending deep and playing on the counter-attack under Nuno Espirito Santo. It worked, but Bruno Lage is attempting to play a more proactive game, expecting the forwards to press much more than before.

Hwang offers them hope because it is a skill that he learned too.

"In Korea, I did not really need to defend, I could just attack and score goals so it was never a problem. When I played on the European stage, initially that was my weakness, not doing the defending. Actually, that was the main reason why I did not play more at Salzburg at first. However, I overcame it and in the end, it has become my strength."

It earned him a transfer to RB Leipzig in the summer of 2020, the expectation being that Salzburg's sister club would be the ideal place for him to adapt to the Bundesliga.

It was not a success. Hwang suffered from COVID-19 early in his stay, telling his then coach Julian Nagelsmann that he felt "almost dead" for a week. While he recovered from the virus, it made for an awkward start and the chance to shine never really came his way.

"I was in good condition but for some reason, I do not know why, I did not have the opportunity to play more," he explains. "Even if I did it was only for 10 or 15 minutes. It kept going like that and it caused my spirits to go down a bit."

Hwang was involved in 18 of Leipzig's final 23 games of last season, but started only four. Leipzig were careful to manage his minutes, not giving him more than an hour until May, but for Hwang himself that clearly remains a source of frustration.

"Obviously, during the time that I had COVID-19 I was really sick," he adds.

"But when I got better my condition was actually far better than before so I was in good shape and I knew that I could have played well. But after three or four months, they kept telling me that the reason I was not playing was still because of COVID-19.

"That is what I did not understand because I felt even better after COVID-19. They just kept making that excuse. I was helpless because I was ready, I was preparing well, but they just kept giving me the same excuses. As a player, there was nothing I could have done."

Wolves could take advantage of the fact that he feels this is a belated chance to impress in a big league. Supporters were annoyed that Lage was not given more reinforcements late in the window but everyone is happy with Hwang, his versatility already an asset.

Against Watford, he replaced Francisco Trincao on the left wing, making that run from out to in that other wide forwards at Wolves must add to their game. Hwang has that instinct.

Against Brentford, he came on as a No 10 behind Raul Jimenez, impressing again. Lage has spoken of his ability "to find space in between the lines and link the game more with Raul" and there was one flicked nutmeg inside the box that had the crowd on their feet.

"I think Bruno Lage mainly wants me to play as a left winger," reveals Hwang. "However, he is trying to give me lots of freedom in terms of position, allowing me to go to centre-forward or the wings, playing in whatever position that I need to be."

He has set no targets this season. "I don't think too far ahead, I just focus on the next game." And there are 306 reasons why he will never be Wolverhampton's favourite Bull. But Hwang Hee-chan has made a fine start. Maybe Wolves will go on a charge soon.

Watch Southampton vs Wolves live on Sky Sports Premier League from 1pm on Sunday; kick-off is at 2pm