Michael Beale coached players including Mason Mount and Trent Alexander-Arnold in the Chelsea and Liverpool academies, has been assistant manager at Sao Paulo, Rangers and Aston Villa, and is now taking on first job as a head coach at QPR 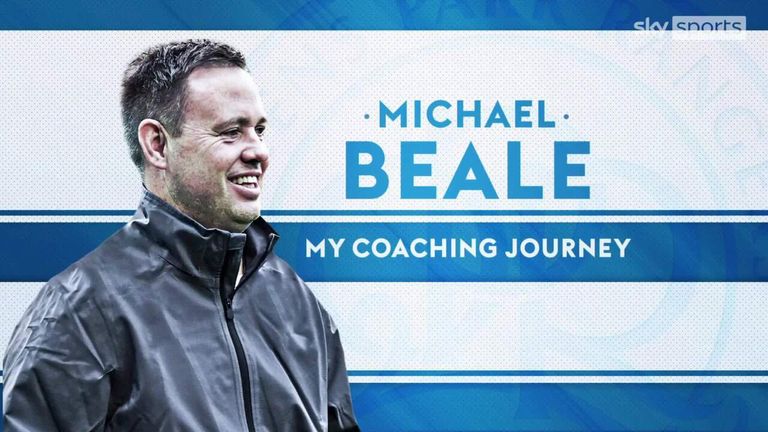 Michael Beale discusses his coaching journey from Chelsea and Liverpool's academies to working as Steven Gerrard's assistant and his big step into management at QPR.

From coaching kids in church halls after he stopped playing at 21 to his first manager job in charge of QPR, Michael Beale has been on some coaching journey.

In between he has helped develop some of the Premier League's biggest names. Mason Mount, Declan Rice and Tammy Abraham are among the players he coached as young boys at Chelsea, while Trent Alexander-Arnold is the star to emerge from his time at Liverpool.

From coaching at Sao Paulo with an iconic Brazilian to being Steven Gerrard's right-hand man for the Invincible title win at Rangers and Premier League challenge at Aston Villa, Beale has built up a range of experiences which he says have left him "over-ready" to fulfil his long-time ambition as a first-team manager.

Sky Sports visited him at QPR's new training ground to hear the lessons he's learnt along the way, why this club was the right one for his big leap into management, and the "exciting" brand of football he intends to bring to west London…

"I used to drive Loftus-Cheek to training…"

After time at Charlton and FC Twente as a youth player, Beale's playing days were over at 21 but his future remained in football, with a role at Chelsea offered to him on the back of his work coaching futsal to children in church halls in Bromley, south east London.

He'd go on to spend 10 years working in the Chelsea academy and was shaped by the high-quality, high-expectation environment.

"I was in charge of the development centre programme, which was boys coming in between the ages of six and nine to be signed for the academy at U9 level and the age groups above," said Beale.

"All these young players were all at Chelsea at the same time, so what an upbringing that was.

"There were a lot of very, very good youth coaches there but also a lot of good first-team managers and things got drip-fed through, so it was a really exciting time for me. And the 10 years there gave me a great foundation to move on with."

"Young English talent is now trusted both at home and overseas"

Chelsea long had a reputation for struggling to transition its good young players into the first team but that tag has been thrown off in recent years, with many of the names Beale mentions going on to make the senior squad.

It reflects a growing trend in the game of young British players being given top-level opportunities either at home or by European clubs.

"There were always a lot of talented young players at Chelsea and a frustration they weren't getting through. But the past few years have been so pleasing," said Beale. "But it's also been so pleasing across the country to see our young players coming through and going abroad, like Jadon Sancho and Jude Bellingham. That's been a really nice thing - that young English talent is being trusted both at home and overseas.

"That's the way that coaching is going to go also. We've got a lot of good young British managers at the moment and I think the next step is for them to get the best jobs overseas as well."

Beale did just that when he accepted an offer from former goal-scoring goalkeeper Rogerio Ceni to be his assistant at Sao Paulo in 2017 after the pair had met during the Brazilian's visit to Liverpool's academy.

"No it's not [a normal route for a young British coach] but at the same time what an opportunity to go and work in Brazil and learn a second language in my first time at first-team level," said Beale. "It was a huge club. Their academy is one of the most famous academies in the world and when I saw that I was seduced by it and wanted to give it a go.

Having swapped Chelsea for Liverpool in 2012, leaving the Reds' set-up for the Sao Paulo opening wasn't an easy call, given the connection between the U16s, U23s and the first team of Brendan Rodgers and then Jurgen Klopp - and the talent being produced.

"It was fantastic [at Liverpool]," said Beale. "Both Brendan and Jurgen wanted to give young players an opportunity. I had the best moments in my career at Liverpool. I learnt loads there.

"I worked with some fantastic young players. The biggest one is Trent Alexander-Arnold, who came through and has won everything there is to win at such a young age. Every time I see him play I just smile because I know the journey he's been on to get there."

After returning from Brazil, Beale went back to Liverpool's U23s but it would only be a brief stay this time. Club legend Gerrard, who had been working with the Liverpool youth teams, asked Beale to be his assistant in his first manager job at Rangers.

"When he asked me I was actually quite surprised but it was an opportunity too good to turn down," said Beale. "You're going to an institution, a huge football club in Rangers.

"I knew the challenge was big because financially it was half what your main rivals were spending and generating. You knew it was a long road but you had to build your identity as a coaching staff, build Steven's identity as a manager. All of us can be really proud of the work we did there.

"There are a lot of obsessive people in the Premier League. It's such an elite level now"

Beale's partnership with Gerrard took him from one big club in Rangers to another in Aston Villa in November 2021. There, Beale got his first real taste of coaching in the intensity of the Premier League.

"In the Premier League now, with the demands to play at that level, players live a very clean life every day. There are a lot of obsessive people in terms of their fitness, their diet, sleep, how they recover and prepare for games. It's such an elite level now," said Beale.

"The level of the Premier League every week is so high. For players going into it new from the Championship it's a bit of a shock, and for coaches coming in from the outside. But that's where we were blessed because of the time we'd had at Liverpool, Steven playing in the league for so many years and [fellow coach] Gary McAllister, we were that little step ahead in terms of managing it. I wasn't too shocked by it.

"Each team has unbelievable individual players. You only have to see the transfer window so far this summer and see the way teams are strengthening, it's such an exciting league to be in. I call it the world's league. I don't think it's the English league. The English league is the Football League. The Premier League is the world's league. It's the one all the other countries look into."

So, given the brilliance of the Premier League, what drove Beale to step away from the top flight, Gerrard and Villa to put himself in the spotlight at QPR in the notoriously difficult Championship?

"It had to be something very exciting to leave Steven and the staff because I'm very close to them and I think the project at Aston Villa is in a really good place," said Beale. "But I want to be a manager at that level so I have to go and challenge myself again to be that.

"It's been four years as being an assistant. I've loved every single minute. Steven has treated me like more than a normal assistant, he allowed me to do a lot more and I felt like he gave me the best mentorship to be a manager.

"I felt over-ready. I turned down quite a few opportunities but it was getting to the stage where I couldn't keep doing that. So I had to look for the right one. I listened to the board here and I was excited about the squad already. There were three or four I was very keen to work with, and with the new training facility here it was an exciting moment to join the club.

"I need to be able to jump out of bed in the morning and my next challenge was to become a head coach in a club that had a similar vision to me in terms of giving younger players an opportunity to fulfil their dreams. That's what QPR is about.

"With every opportunity, there's a risk it won't go so well - or it will go fantastically well. I always look at the optimism and the experience going in the direction I want. I'm fulfilling my dream becoming a head coach but it's more than that, I feel I'm at the starting blocks for the rest of my career. I'm hugely excited for the season to start."

So what can QPR fans expect from a manager whose coaching journey has taken him through youth football, to Brazil and back, and to huge clubs alongside a star name?

"I like a lot of flexibility in the final third, I like people that can carry the ball and dribble," said Beale about his preferred style of play.

"When I was looking at this squad I was looking at people like Ilias Chair, Chris Willock and Albert Adomah who can get bums off seats. I like a team that wants to have possession, that's quite aggressive in the sense of wanting to go and score and then quite aggressive out of possession - not going to make a big tackle but in terms of pressing and wanting to win the ball back.

"It's got to be exciting to play in first, for the players, then it will be exciting to watch. You're trying to put all those experiences from different coaches and clubs together and add your own ideas along the way and now this is a chance for me to bring my ideas out into the open for everyone to see.

"I'm supremely confident and I feel happy and calm in the job, I feel like I'm working as normal as I have done in the last two or three clubs."

Beale has been on a fascinating journey to get to this point - but this is just the start of the next intriguing chapter.