'Keep up the good work!' writes Jamie Vardy on rainbow corner flag, which has been given to Leicester City's LGBT+ fans group Foxes Pride after they received abusive messages on social media following striker's winning goal at Sheffield United

Leicester's Jamie Vardy has written a goodwill message to the club's LGBT+ fans group on the rainbow corner flag he demolished while celebrating his winning goal at Sheffield United.

After netting in the last minute to secure a 2-1 Premier League victory at Bramall Lane on Sunday, a jubilant Vardy ran and slid into the flag, which was carrying the Pride flag colours to mark the annual activation of Stonewall's Rainbow Laces campaign, sending splinters flying.

Although the striker - a boyhood Sheffield Wednesday fan - replaced the flag in the right spot, he was shown a yellow card for his overzealous celebration.

The images quickly went viral, and Leicester's LGBT+ and allies supporters group Foxes Pride were then inundated with tweets from other users misrepresenting Vardy's actions as a negative response to the campaign.

However, on Tuesday night, the group posted an image to Twitter showing the flag now bearing a written message: 'FOXES PRIDE - keep up the good work!' and Vardy's signature.

"All at Foxes Pride have been saddened by LGBT-phobic comments online over the last few days after Vardy's corner flag goal celebration," the group said in an additional tweet.

"We are proud and grateful for the support that Vardy and Leicester City FC continue to show for Rainbow Laces, LGBT fans and Foxes Pride."

The group's chair, Graeme Smith, told Sky Sports: "Since being established in 2015, Foxes Pride have always appreciated the support of all involved at Leicester City.

"This gesture from Vardy underlines the inclusive culture at our football club. We are proud to be able to partner with them, not just for Rainbow Laces but all year round." 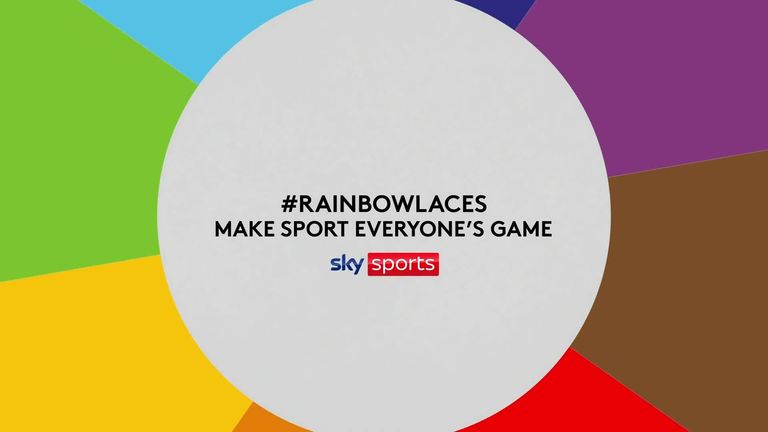 On Rainbow Laces Day, LGBT+ people and allies are speaking up in support of equality and inclusion in sport - as a member of TeamPride, Sky Sports is proud to amplify their voices

On Wednesday, the campaign is celebrated nationally with Rainbow Laces Day, with sports fans across the country encouraged to lace up and post to social media in support of the slogan 'Make Sport Everyone's Game'.