Raphinha, one of the breakout stars of the Premier League season, tells Sky Sports about his brilliant start to life at Leeds and his friendship with Ronaldinho. Watch West Ham vs Leeds live on Sky Sports Premier League from 7pm on Monday; kick-off 8pm

Gary Cahill knows it. Brighton's Joel Veltman and Alexis Mac Allister know it too. They have all been victims of Raphinha's outrageous skill this season and they are not the only ones. The Leeds star is fun to watch but he is frightening to play against.

There have been five goals and five assists in the Premier League so far. He already looks a bargain at £17m. But it's those moments of flair - the feints and stepovers; the nutmegs and backheels - that have really captured the imagination.

Raphinha, seated in front of a laptop screen at Leeds' Thorp Arch headquarters following the afternoon's training session, just smiles and shrugs at the mention of them. It all comes naturally to him.

"As we say in Brazil, it's from the cradle," he tells Sky Sports, speaking by video call in his native Portuguese. "It's something you are born with, a God-given gift. God says, 'this guy's getting this gift and he's going to make the most of what I'm giving him'.

"It's just a natural process. There are moments in games that demand one thing and it comes into your mind to do it. It's not trained, it happens naturally as it's something I know how to do."

Raphinha is the Brazilian winger with magic in his boots.

He left his homeland for Portugal aged 19 and by 24, his eclectic CV already includes spells with four different clubs in three different European countries. From Vitoria Guimaraes to Leeds, he has shone for them all. He counts Ronaldinho as a family friend and has Deco, another Barcelona legend, for an agent.

What makes him such a find for Leeds is that he has substance as well as style. Marcelo Bielsa demands hard running and relentless work-rate from his players out of possession and Raphinha, explosive in his energy levels, is happy to provide it.

In fact, he ranks third among all Premier League players for high-intensity sprints per 90 minutes this season. It's little wonder Bielsa, the man Raphinha calls professor, has started him in every Premier League game since his full debut back in November.

"These days my position isn't just about making things happen in attack, you also have to be very responsible in defence," says Raphinha. "Ever since I started playing football I've always liked this part of the game, the intensity of running forward and tracking back.

"I think the style of play of the professor's Leeds really suits my style of play. Thinking about what I do best - my speed and ability with the ball, it's always important that a player is conscious that they must contribute as much in defence as they do in attack."

When the ball is at his feet, though, he is free to improvise. "The best thing you can do with players who are so spontaneous is to let them be themselves," said Bielsa last month. Raphinha agrees.

"It's really important to have a manager who allows you to do what you know, what you've already demonstrated you can do in the past. I believe that when a team signs you, you've been brought in to do what you were doing at your previous club.

"Having a manager and team-mates that give you the freedom do your best, play your own game and show what you're capable of is really important for the natural development of the player."

Recent evidence suggests he is right about that - Raphinha ranks top among Leeds players for chances created, dribbles and a lot more besides - and he is benefitting from his new surroundings too.

Raphinha was itching to test himself in the Premier League after an impressive season in France during which he helped Rennes secure a Champions League finish in Ligue 1. It is clear from early on in our conversation that he is delighted to be here.

"I'm loving being part of this competition, playing in a league that I've always admired. In my opinion, the Premier League is the best championship in the world. It has the best players, the best clubs. The games between the teams are more competitive."

There are challenges too, of course - "it's always cold, but that's just an obstacle we need to overcome," he says, gesturing towards a nearby window with a smile - but he is already a popular figure in the dressing room at Leeds and he puts his swift adaption on the pitch down to the players and staff around him.

"The way in which they've gone out of their way to help me from the moment I arrived has been really important in my adapting well here. I look to learn something new every day and they're always looking to help me with things I maybe didn't know about.

"I think that's been the most important to me adapting well, the help from my team-mates, the coaching staff and the professor."

Raphinha's outstanding performances for Leeds have predictably prompted rumours of interest from elsewhere, with Liverpool and Manchester United said to be among his suitors. But he certainly doesn't sound like someone planning his next move. 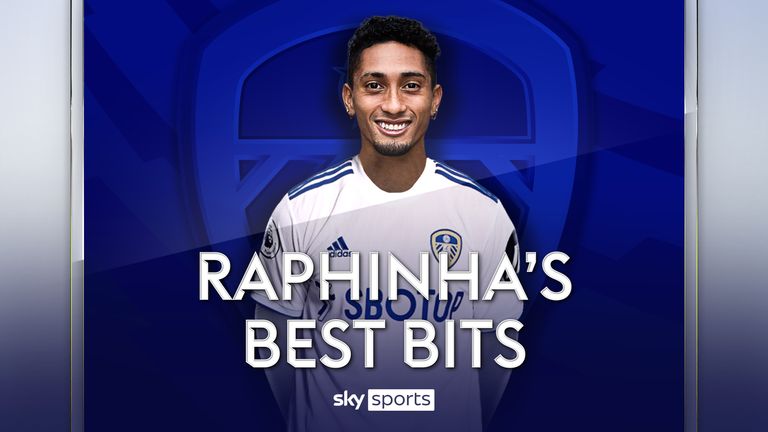 Watch Raphinha's best moments for Leeds so far this season

"The club, all the people who work here, the staff and the players have really helped me develop," he says. "I'm really grateful for this and always look to do my best for them all. This creates a bond with everybody here.

"I'm really happy here and feel I've adapted well. I think everything's in place for us to achieve good results working together.

"We know that Leeds are a club who belong in the Premier League. We'll be always looking to keep the club here. But we're also aware that we're a promoted side that needs to adapt to the league like we're doing now. Our initial objective is to stay in the top division."

That much has looked certain for some time. Leeds are as close to the Champions League places as they are to the relegation zone ahead of Monday's trip to West Ham. But it might not have been so comfortable if not for their late move to sign Raphinha.

Leeds and Bielsa had been tracking him for some time. It was only in the final few days of the summer transfer window, however, the evening before he was due to play for Rennes against Ligue 1 rivals Reims, that he became aware of their interest.

"I found out at the last minute that there was an offer from Leeds and professor Bielsa wanted me here. It all had to be resolved very quickly as the transfer window was about to close the following day."

Raphinha ended up playing in the game against Reims, scoring one goal and setting up another in a 2-2 draw - his performance at a time when he knew he was leaving underlining his professionalism - before jumping on a flight to Leeds immediately afterwards.

The allure of working with Bielsa made it a straightforward decision.

"I think that makes the decision easier for a player. The player feels embraced and that they will be a part of the project.

It's fair to say Bielsa has lived up to his expectations.

"He's a very demanding coach," says Raphinha, smiling again. "He demands the maximum from all his players and as a result our style of play comes naturally. He always expresses his opinion and likes to hear the opinions of the players so we reach a consensus that benefits the team."

Raphinha now hopes to build on his bright start at Leeds and he is helped not just by Bielsa but by the support of his idol from afar.

Ronaldinho, who, like Raphinha, comes from the Brazilian city of Porto Alegre, sent him a congratulatory video message after he scored his first Leeds goal against Everton in November.

More recently, Raphinha lifted up his shirt after scoring against Southampton to reveal a message of support to the 40-year-old following the death of his mother.

"Since I was little he was my greatest idol because of the way he played. The joy and spontaneity he played with on the pitch and the happiness that emanated from him - I always admired him for that.

"My dad was a childhood friend of his so we ended up being close. Because of the person he is, I've always been inspired by him both as a person and a player."

Ronaldinho's influence is certainly evident in the way in which Raphinha now toys with Premier League defenders.

"The most important thing for me is to enjoy myself whilst I'm doing what I love the most, which is playing football," he says. "When I'm on the pitch, I try to be happy and do my best."