Neal Maupay signs for Brighton from Brentford on four-year deal

The France U21 international passed a medical on Monday and Sky Sports News understands the fee for the 22-year-old is around £20m.

Maupay scored 41 times for Brentford in the Championship over the past two seasons after joining from St Etienne in summer 2017.

Brighton head coach Graham Potter said: "Neal is a talented striker, with good strength and pace, and he is a goalscorer. He will add an extra dimension to our existing forward options, and we are delighted to have completed the transfer.

"The club has been monitoring Neal and has been aware of his ability for some time. Separately I was also aware of his obvious ability at Swansea, and came up against him in the Championship last season.

"His record in the Championship has been exceptional, with 41 goals across the last two seasons, and now his challenge is to transfer that to the Premier League." 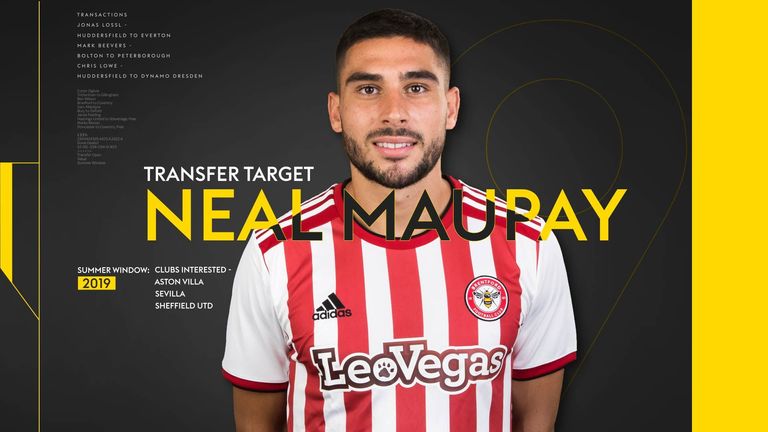 With Maupay joining Brighton, we take a look at some of the Brentford forward's best goals for the Bees

Aston Villa, Sheffield United and West Ham also registered their interest in Maupay this summer but it was the Seagulls who matched his £20m valuation.

Brighton have also brought in Leandro Trossard from Genk and Matthew Clarke from Portsmouth, who has subsequently gone on loan to Derby County.