Celtic host newly-crowned champions Rangers in Old Firm at Celtic Park on Sunday; Rangers did not give Celtic guard of honour when Hoops travelled to Ibrox as title winners in 2019; watch Celtic vs Rangers on Sunday, live on Sky Sports from 11am; kick-off at midday

By Emma Paton and Joe Shread 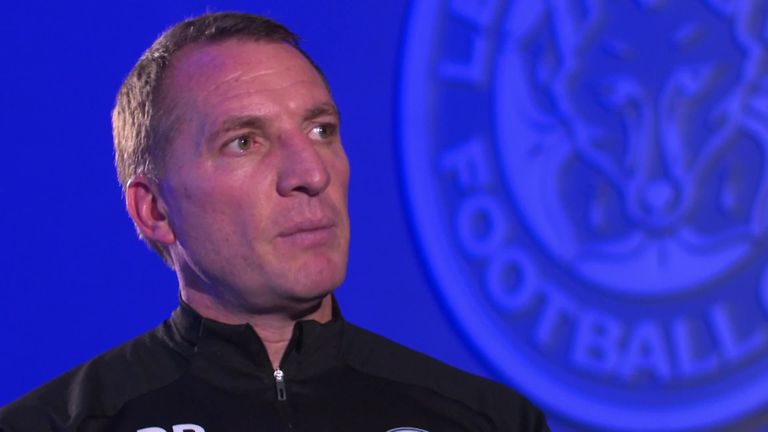 Brendan Rodgers believes his former club Celtic should give newly-crowned champions Rangers a guard of honour when the sides meet on Sunday, live on Sky Sports

Rangers will go into the game having finally ended Celtic's nine-year dominance of Scottish football by winning their first Premiership title for a decade earlier this month.

The issue of whether the great rivals of the Scottish game should applaud each other onto the pitch if one of them has already won the title was raised two years ago, when Rangers decided not to give newly-crowned champions Celtic a guard of honour ahead of their game at Ibrox.

But Rodgers says Celtic should recognise Rangers' title win and cited the guard of honour Manchester United gave Chelsea at Old Trafford after the Blues had won their first Premier League title in 2005 as an example.

He told Sky Sports News: "My feeling is always that you should show humility and class and be a sporting team.

"I can never forget when I was at Chelsea as a young coach and in that first season with Jose [Mourinho] they won the title.

"I remember going to Old Trafford to watch the game that evening and I'm sure that the Man Ued players didn't want to do it [a guard of honour].

"It was sporting but can also provide you with great motivation going forward. It's something that for me - despite the rivalry, despite how difficult it is - you should do and then use it as motivation."

Rodgers is a Celtic supporter and won two Scottish titles as the club's manager but admits Rangers' title win is fully deserved. The Leicester boss also offered praise for the job done by Steven Gerrard, who played under him for three years while the duo where at Liverpool before leaving the club just months before Rodgers was sacked.

"Steven's done excellent," said Rodgers. "This season they have been the most consistent team from the very off.

"He's gone in and stabilised the club, gave them a way of playing. He's had great support from the board.

"The intensity of the Celtic-Rangers competition, the demands and expectation, it's huge. In that third year he's delivered what they wanted.

"As a Celtic supporter it's sad to see, of course, but they've been the most consistent team. They deserve it."

'Kennedy must stay at Celtic'

Rangers go into Sunday's game at Ibrox - live on Sky Sports - 20 points ahead of Celtic and just six games from recording an unbeaten league season.

The huge gap between the clubs led to Neil Lennon's resignation as Celtic boss last month, with the former club captain replaced by his assistant John Kennedy on an interim basis. Former Celtic boss Brendan Rodgers says it is important for the club to keep John Kennedy, whether that is as their new manager or as part of the backroom staff

Kennedy has led the side to a win and a draw from his first two games in charge and, whether he does enough to earn the full-time job or not, Rodgers says the former Hoops defender must remain part of the club.

"John will certainly be in the frame," said Rodgers. "I've got no doubt that one day he will be a manager.

"When I arrived there I didn't know John, but when I sat and spoke to him and one or two other people, they were very clear what his qualities were.

"One thing's for sure - John being in the club is very, very important. If he didn't get the job and another manager went in, to have John Kennedy by your side is a great move."