Brendan Rodgers spoke of recuperation and recruitment after Celtic's 1-0 defeat by Rangers at Ibrox on Saturday.

The Hoops had not been beaten in their 12 previous Old Firm games since the Northern Irishman took over at Parkhead in 2016, with 10 wins and two draws before the trip to Govan.

However, midfielder Ryan Jack's first-half strike gave Steven Gerrard's side a well-deserved win and took them level on points with the Ladbrokes Premiership leaders having played a game more as the top flight closes down for the winter break. 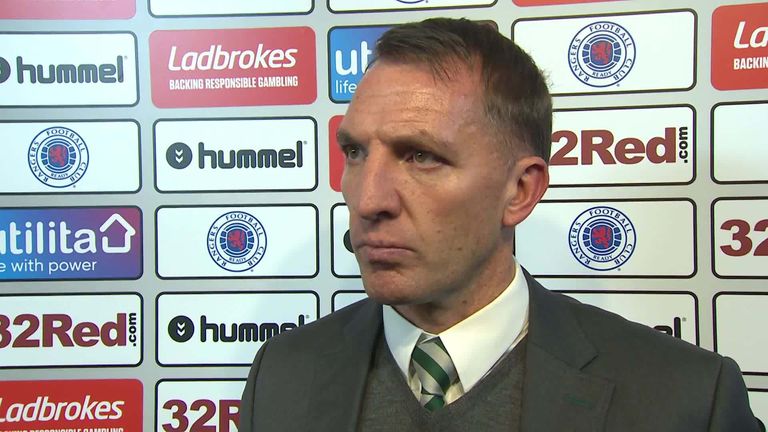 Rodgers will turn his attention to boosting his squad - a striker is a priority given that Odsonne Edouard is the only available centre-forward - before the Hoops fly out to Dubai next week for warm-weather training.

The former Liverpool boss told Celtic TV: "The players will have a number of days with their families.

"Next Saturday we will meet up again. We have a lot of work to do in terms of our game, we have some work to do in the transfer market, that we want to get players in.

"It is clear where we need it in terms of the squad then we will come back ready into our next game and be ready to fight.

"2018 has been a really good year for us, it [defeat to Rangers] is always a sore one, it is the first time I have experienced it.

"But you have to be honest enough as well, whenever you lose. I felt it was the deserved result even though we had a couple of chances that maybe could have went in.

"But we will be ready when we get back and we are still top of the league with a game in hand."

Rodgers hailed the performance of Callum McGregor despite having to take him out of midfield and into left-back with Kieran Tierney only fit enough to start on the bench.

As much as anyone, McGregor tried to take an under-performing Celtic side forward in the second half and had the ball in the net only to be ruled offside.

Rodgers said: "He was our best player by a mile. He was very, very good. Wherever he plays he always brings that quality to the game.

"You have seen that thrust in his game getting forward. He was outstanding for us but of course whenever you have to take him out the middle you can suffer a little bit."