Lionel Messi: New Barcelona president Joan Laporta pledges to do everything to keep striker at club

Joan Laporta has returned for a second time as Barcelona's president after a previous spell between 2003 and 2010; Laporta: "I will try to convince Leo (Messi) to stay with us. That is a must-do task, I will do all I can" 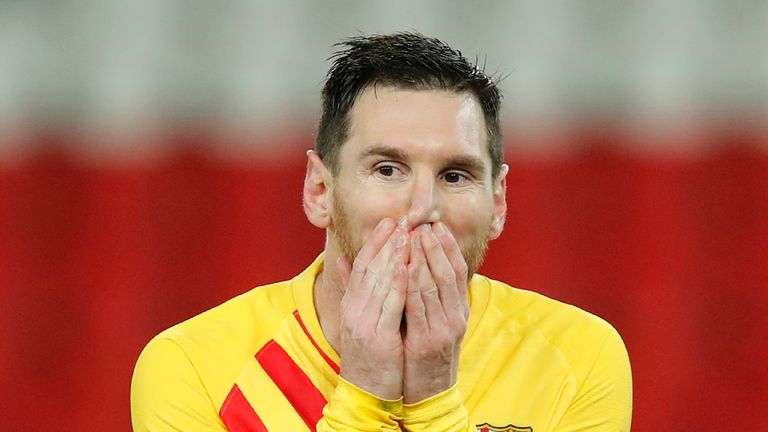 Joan Laporta has pledged to do everything within his power to keep Lionel Messi at Barcelona after being sworn in as the club's new president, and has also told coach Ronald Koeman he has the club's backing.

Laporta, who was previously Barca president between 2003 and 2010, was voted in by club members last weekend but had to secure a €125m bank guarantee before being inaugurated.

Now in office, one of his first tasks is convincing Messi, who turns 34 in June, to extend his contract, which expires the same month, beyond the end of the season.

Messi, who wanted to leave last summer, voted in last Sunday's election and was seated in front of Laporta as he made his speech at Camp Nou on Wednesday in front of around 300 invitees.

"I take the opportunity to say again that I will try to convince Leo (Messi) to stay with us. That is a must-do task, I will do all I can. He knows it.

"Whatever he does will be OK but we will try to make him stay because he is the best player in the history of football.

"And my apologies Leo, for saying this right here and right now, but you know of my love for you, Barca loves you a lot and if this stadium would be full when you play the next game I am sure you wouldn't be able to leave."

Laporta faces a daunting challenge, not only to keep Messi, but also to reverse the club's financial difficulties.

"It is true that the economic situation of the club is the source of pre-occupation for all Barca associates and us as well and that is our priority," Laporta added.

"To turn Barca economically viable again, that is why we have a shock plan we will implement. We know how to do it, it will mean making an effort and working a lot.

"Now that we have the power to make decisions we will try to generate new sources of income. We will try to make the right decisions to reverse the current situation."