Christian Eriksen has joined Inter Milan in a £16.9m move from Tottenham, while Giovani Lo Celso has made his loan move to Spurs permanent from Real Betis for £27m.

Eriksen has signed a four-and-a-half-year contract at the San Siro in a deal which includes Inter paying a £843k (€1m) sell-on clause to the Dane's former club Ajax and Spurs pocketing the proceeds of a friendly game with the Milan club in the future.

The 27-year-old flew into Milan from London on Monday morning after weeks of negotiations between the clubs, with Spurs chairman Daniel Levy refusing to budge from his €20m (£16.8m) request, despite the risk of losing the Denmark international for free upon his contract expiry in the summer.

Eriksen was greeted by jubilant Inter fans at the Humanitas clinic in Rozzano, where he underwent his medical before penning his £130k-per-week deal, keeping him at the San Siro until June 2024.

Barcelona made an enquiry for Eriksen on Thursday last week, but failed to follow up with an offer.

"I couldn't wait to get here," he told Inter TV. "It's amazing to be here, I want the fans to know who I am, I already had the chance to feel their warmth, they gave me a fantastic welcome. 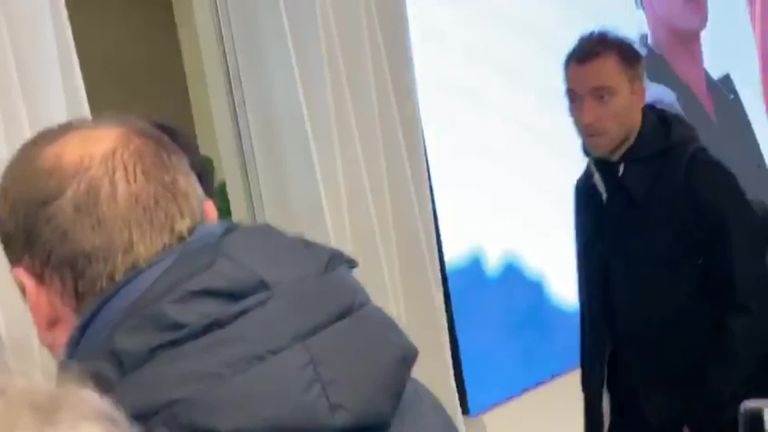 Tottenham midfielder Christian Eriksen is closing in on his £16.8m move to Inter Milan after landing in Italy to undergo a medical with the Serie A club

"I feel amazing. I had a chance to meet Conte when I was at Tottenham and we faced his Chelsea, it was very tough. The opportunity to meet him and learn how his teams play is very fascinating.

"I am very happy to play in Serie A and in a big team like Inter, a fantastic club."

Eriksen is Inter's third signing from the Premier League this month, having already brought in Ashley Young from Manchester United and Victor Moses from Chelsea, with head coach Antonio Conte also keen on Olivier Giroud.

Inter are embroiled in a title challenge with Juventus in Serie A as they find themselves three points behind Maurizio Sarri's side, who lost 2-1 at Napoli on Sunday evening.

Eriksen will wear the No 24 shirt and could make his debut on Wednesday, when Inter host Fiorentina at the San Siro in the Coppa Italia quarter-finals, or on Sunday when they travel to Udinese in their next Serie A outing.

Argentine midfielder Giovani Lo Celso has signed a five-and-a-half-year contract at Tottenham, keeping him in north London through to June 2025.

The 23-year-old, seen as the permanent replacement for Eriksen, arrived in August on a one-year loan from Real Betis with Spurs having an option to buy for £27m in January or £34m in the summer.

"It's not an obligation, it's an option. I think the boy is earning the decision. He's making an easy decision for the club to execute the option," Mourinho said of Lo Celso, who joined on a season-long loan from Real Betis.

"[He has shown an] incredible evolution since I arrived, he had barely played a game, I think only against Red Star Belgrade. With me, it was a little bit difficult in the first couple of weeks, but he understood what we wanted.

"Good learner, good kid and I think by himself he made the decision that the club is going to execute the option. That's normal, he earned it."