Erling Haaland: Borussia Dortmund have 'started to pressure me into making a decision'' about my future

Erling Haaland says Borussia Dortmund are pressing him to make a decision on his future: "The last six months, I have chosen not to say anything out of respect for Dortmund. But now the club has started to pressure me into making a decision, but all I want to do is to play football" 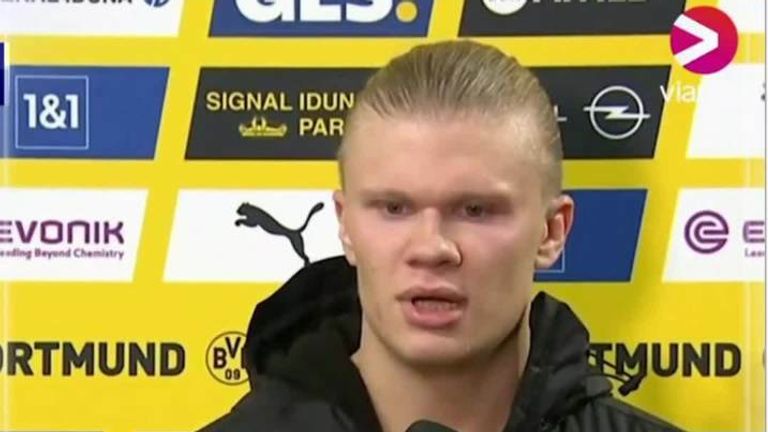 Erling Haaland says pressure from Borussia Dortmund to make a decision about his future is proving to be a distraction.

Haaland, who scored twice in the 5-1 Bundesliga win over Freiburg on Friday, has a contract with Dortmund until the summer of 2024, with a £64m release clause understood to come into effect this summer.

Manchester City are thought to be frontrunners for Haaland's signature should he decide to move to the Premier League, and the 21-year-old striker indicated ongoing conversations about his future are beginning to weigh on him.

"The last six months, I have chosen not to say anything out of respect for Dortmund," Haaland told Viaplay. Highlights of the Bundesliga match between Borussia Dortmund and Freiburg

"But now the club has started to pressure me into making a decision, but all I want to do is to play football.

"I have said from the beginning that I want to focus on football, because that is when I am at my best, not when other things come into my mind.

"Now they have put pressure for a while. So it is time to get things started. All I want to do is to play football, but I can't do that now."

Analysis: 'Difficult for Haaland to say no to Guardiola' Kaveh Solhekol says that Manchester City are in 'pole position' to sign Erling Haaland from Borussia Dortmund, however, the German club are confident in keeping the star striker for another season