England goalkeeper Jordan Pickford has dismissed criticism of his recent form after keeping his starting place for Friday's opening European Qualifier against the Czech Republic.

Having played a starring role during England's run to the World Cup semi-finals in Russia last summer, Pickford has struggled to maintain that form with Everton this season, particularly in an error-strewn display against Newcastle earlier this month.

With Burnley goalkeeper Tom Heaton in fine form, there had been speculation that Pickford could lose the number one jersey, but England manager Gareth Southgate put an end to it as Pickford joined him for Thursday's press conference.

"It's great for me," Pickford said. "I feel like, apart from the Newcastle game, I've been in a good run of form.

"In the Newcastle game, I made a mistake and bounced back with a good performance against Chelsea, so that shows my mentality and my character in myself, and I think that's been good for me.

"The manager has put faith in me to start tomorrow. I've been training well all week as well, so that's good."

Having backed up their achievements in Russia by reaching this summer's inaugural Nations League finals in Portugal, Southgate's side begin their latest challenge at Wembley on Friday, before facing Montenegro away on Monday.

Pickford insisted England won't be distracted by any attempts to unsettle them after Czech striker Matej Vydra suggested the visitors would target Leicester defender Harry Maguire. 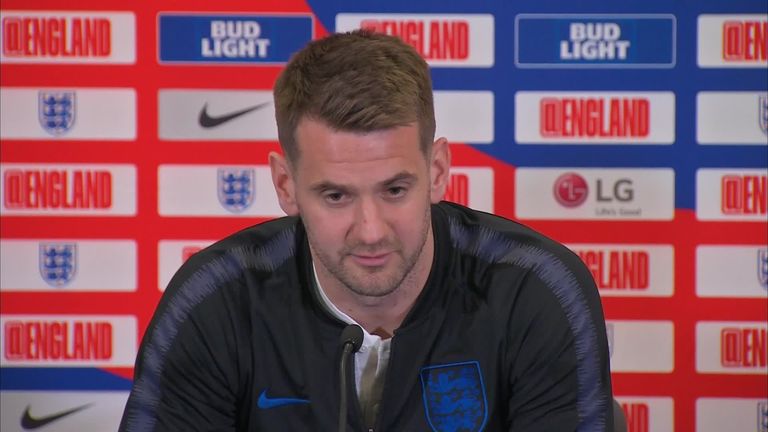 "No (I have not seen the comments)," Pickford said. "I think as a squad we know how good we are and how capable we are of winning games.

"They can say things, but we need to focus on ourselves and get those three points tomorrow. It's all about us and not about their comments.

"It's obviously been four months since we've been with England now, and it's great to come back here and work with the manager and the staff over the next week."

Sancho set to start for England

Southgate is planning to give Jadon Sancho his first competitive England start in their opening European Qualifier against the Czech Republic on Friday, Sky Sports News understands.

Pick your own England line-up

England host Czech Republic in the first of their European Qualifiers on Friday night, but who would make it into your line-up?

Marcus Rashford's withdrawal from the squad on Thursday because of an ankle injury has opened the way for Sancho to come in.

The 18-year-old has played less than half an hour of competitive football with England's senior team in his three caps, though he did start November's friendly against USA.

Sancho will be selected ahead of the man with whom he won the U17 World Cup in 2017, Chelsea's Callum Hudson-Odoi, who could yet make his England debut off the bench.