Southgate on Kane: "As far as I am concerned he's on schedule, with all the information that we've had we know that he is progressing well." 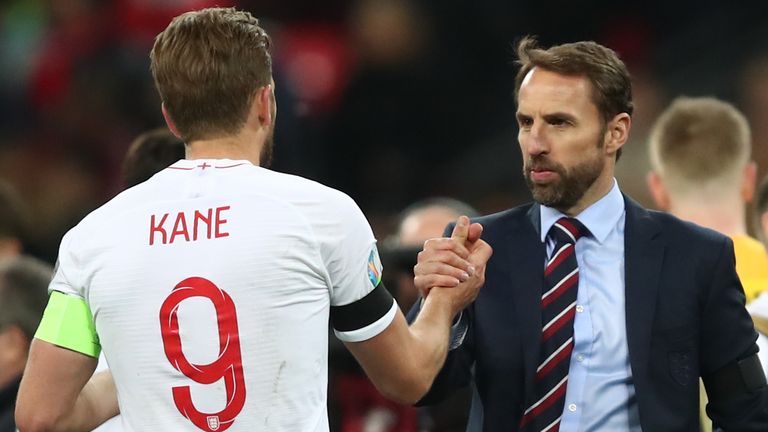 Harry Kane is "on schedule" in his recovery ahead of this summer's Euro 2020 campaign, says England head coach Gareth Southgate.

Kane has been absent for Tottenham since suffering a ruptured tendon at Southampton on New Year's Day.

Spurs boss Jose Mourinho said last week that the England striker was "ahead of schedule" and could return for as many as five matches at the end of the season.

Southgate was not quite as optimistic as Mourinho, but did say that the updates he has received suggest Kane is "progressing well".

"As far as I am concerned he's on schedule, with all the information that we've had we know that he is progressing well," he told Sky Sports News.

"He'll give himself the best chance of being fit by following everything to the absolute letter.

"I am not surprised by that news and of course it is good to hear."

England's first game of their Euro 2020 campaign is against Croatia at Wembley Stadium on June 14.

Despite wanting both Kane and Manchester United's Marcus Rashford back fit for this summer's European Championships, Southgate insists both players' immediate focus must remain on returning to action for their clubs.

"[I am] realistic, really. Harry and Marcus Rashford have both had serious injuries, they are both long-term injuries, but both of them will do everything within their powers to be fit and ready for us in the summer," he said.

"I think that is difficult to say. The first priority for both of them is to get back playing for their clubs, they are players of Manchester United and Tottenham first and foremost. All being well they will be available for us in the summer.

"I know that both of them want to affect their club's season and the end of this season.

"They are both optimistic and both are very focused on their recovery. It's frustrating for any player to have long-term injuries. Both clubs are pushing for the top four so they are missing big games, big European ties they are missing.

"We have make sure for both it's not a case of just being fit for us, they have long careers ahead of them as well."