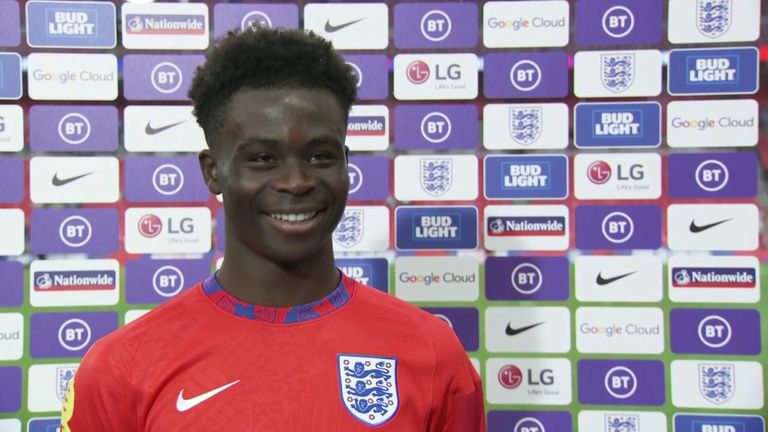 Bukayo Saka said his birthday goal at Wembley - and the support that he received from the fans throughout the game - meant everything as Gareth Southgate talked of the youngster's closure following the Euro 2020 final.

Making his first appearance at Wembley since Italy goalkeeper Gianluigi Donnarumma saved his penalty and ended England's hopes of glory in the summer, Saka scored the final goal of a 4-0 World Cup qualifying win over Andorra.

The Arsenal winger, who turned 20 on the day of the game, had been the subject of vile racist abuse in the aftermath of that European Championship disappointment but supporters cheered his name loudest when the teams were announced.

His face also appeared on a banner alongside that of Jadon Sancho and Marcus Rashford - the two others to miss their spot-kicks in the final - as the England fans made their feelings clear.

"It was the perfect birthday present for me," Saka told ITV.

"I am really happy with the reception everyone gave me. It really shows how proud they are of me and I think that meant a lot for me and it made me want to give my all.

"It really made a difference. Even now, I can hear so many fans chanting my name. It means everything. It makes me believe that everyone supports me through different things.

"This is what I dreamed about. Playing at Wembley in front of a full crowd and my family, scoring on my 20th birthday. I am really happy."

Aside from the goal, Saka impressed, providing much of the impetus in England's play with his willingness to drive at a packed Andorra defence.

Even before his goal, he provided the assist for Jesse Lingard's second goal of the night as England pressed home their advantage once the away side tired in the second half.

The three points edge England closer to next year's World Cup in Qatar as they extend their lead at the top of Group I - but this was about more than points for Saka.

In the view of Gareth Southgate, scoring at the same end of the ground as that penalty brings closure for the player - if any were needed.

"He got a fabulous reception, before the game, during the game," the England manager told ITV.

"You can see how popular he is with the rest of the team as well.

"I hope it is closure but I don't think there's a player in that dressing room who doesn't think positively about what he did all summer."

Kieran Trippier confirmed that himself, speaking about the support that Saka has from his international team-mates.

"The players spoke to him after the tournament but Bukayo is mentally strong," said the Atletico Madrid defender.

"We're all there for him. But now it's about moving forward, enjoying his football and he was unbelievable tonight, on his birthday as well.

"The boys love him. Every training session, every game he plays with a smile on his face."

Highlights of the match between England and Andorra from Wembley

Speaking in his post-match press conference, England boss Southgate said he had spoken with Saka this past week about his penalty shootout miss - but only to reaffirm the support the forward has got throughout the whole of the England coaching staff.

"I didn't do that immediately [speak to him] but had a longer catch-up with him a couple of days ago, mindful of coming back to Wembley today. But it was just to emphasise what he'll recognise from the reception he got from the crowd, that my thoughts of him from the summer are all positive," said Southgate.

"It's hard for me to say what it'll mean for Bukayo. We think he's a super player. The way he's progressed and the talent he has, he's a hugely exciting player and he's already produced some big performances for England."

Southgate: Andorra made it difficult

Reflecting on his side's win, Southgate said England's much-changed starting line-up had a tricky test against an Andorra side who defended doggedly.

The visitors were able to restrict England to just one shot on target in the first half but Southgate's side eventually broke them down late in the second half, after the introduction of Harry Kane, Jack Grealish and Mason Mount.

"It was a really difficult game for the team we started with. They haven't played together as a group so often as the team we played the other night and you're playing an opponent that are slowing the game down and massed in defence.

"When you look at their matches, right the way through they tend to let their goals in late. So we kept trying to do the right things.

"It was a game you've just got to win. I'm glad we got some more goals to send the supporters home with a bit more excitement at the end. But we know against other teams we'll have to play better but it will be a different sort of test."

England are back in World Cup qualifying action on Wednesday, when they face Poland in Warsaw at 7.45pm.