Is Harry Maguire a shoo-in for Gareth Southgate? Can the injured Kalvin Phillips win his race to be fit? Could Ivan Toney jump above Tammy Abraham and Marcus Rashford in the pecking order?

From now until England boss Southgate names his 26-man group for Qatar 2022, with his announcement expected on October 20 ahead of the tournament's start date of November 20, we will be ranking the players we deem most likely to make the cut.

Why Maguire may be a shoo-in

There are certain players who are all but guaranteed to make it - think Harry Kane (1st), Raheem Sterling (2nd), Declan Rice (3rd) and Jordan Pickford (4th) - but does that list still include Harry Maguire?

The 29-year-old is having a torrid time at Manchester United, his poor performances costing him his place in the team. But if Southgate still picks him even in these circumstances, as he has for the upcoming Nations League games against Italy and Germany, then why wouldn't he do so again in a month's time?

Southgate's faith in Maguire appears contradictory to some. After all, this is a manager who has previously talked up the importance of club form in his selection decisions.

But Maguire remains his most senior centre-back - he and John Stones (10th) are still Southgate's preferred pairing - and it seems he would rather judge him on his international record. "He has never let the national side down," Southgate said earlier this month.

That's why Maguire sits 11th in our ladder - not as high as he once was, perhaps, but still high enough to make his place in next month's squad a near-certainty.

Like Maguire, Kalvin Phillips has had limited playing time at club level this season, playing a solitary minute in the Premier League since his summer transfer from Leeds to Manchester City.

His call-up to Southgate's latest squad irked some for that reason, but his inclusion was a reflection of his importance to the England boss. The bigger issue now is whether he will be fit for the tournament.

Phillips had to withdraw from the squad due to a shoulder injury for which he is expected to undergo surgery. Pep Guardiola said on Saturday that expects him to recover in time for the World Cup, which is nine weeks away, but it looks a tight turnaround.

For now, he sits 18th in our ladder, but his injury puts him at serious risk of sliding. Jordan Henderson (17th) will hope to strengthen his credentials in Phillips' absence and the same goes for Jude Bellingham (9th) and James Ward-Prowse (22nd).

Others, such as Conor Gallagher (33rd), have their work cut out to climb the ladder.

Dier's form puts him on the up 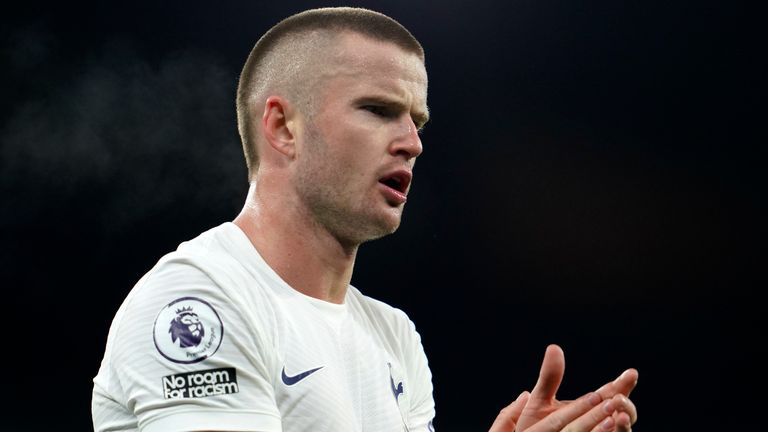 Eric Dier's World Cup prospects looked bleak at the start of this season. The Tottenham defender had not featured for the national team since November 2020. A call-up looked a long way off.

His subsequent return to the fold is a reminder of how quickly things can change. Dier has been excellent for Spurs lately, his commanding performances a key factor in their unbeaten start to the Premier League campaign, and it has not gone unnoticed.

His form has propelled him back into Southgate's squad for England's upcoming Nations League fixtures and his experience - he has 45 caps behind him - might just have put him above Conor Coady (24th), Fikayo Tomori (26th), Marc Guehi (27th), Ben White (31st), Tyrone Mings (38th) and Joe Gomez (40th) in the defensive pecking order.

Toney must seize his chance

Ivan Toney's inclusion was the headline news from Southgate's latest squad, the Brentford striker earning his first call-up on the back of five goals from six Premier League games.

His form already appears to have propelled him above Ollie Watkins (39th) in Southgate's thinking - not to mention injured duo Callum Wilson and Dominic Calvert-Lewin, who do not currently feature on our 40-man ladder - but can he usurp Tammy Abraham (25th) too?

Abraham has established himself as Southgate's preferred back-up to Kane, which is why he sits five places higher than Toney (30th) in our ladder, but the Brentford man will be hoping he gets an opportunity to impress against Italy and Germany.

If he does, his upward trajectory may continue. 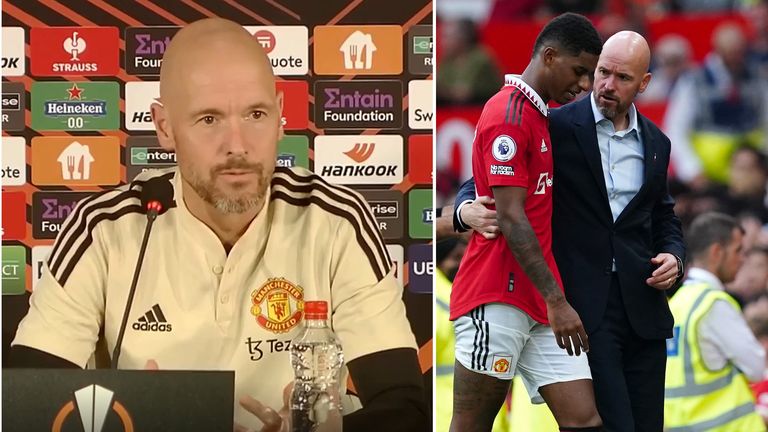 Despite Marcus Rashford being set to miss out on a Nations League international recall, Erik ten Hag is still tipping the forward to start in Qatar

Another player vying for a place among Southgate's attacking options is Marcus Rashford, who sits 29th in the ladder having rediscovered his best form following a dismal spell with Manchester United.

Indeed, he might well be preparing to face Italy and Germany over the next few days if not for what he described as an "untimely" muscular injury which now threatens to stall his momentum.

Rashford did not make Southgate's latest squad as a result but he can be encouraged by what the England boss has had to say about him. "He is a player we know well, so if he can perform at a high level in the next few weeks, he of course will be under consideration."

Southgate offered no such reassurances to Jadon Sancho (32nd), who has also impressed for Manchester United this season but hasn't featured for England since a 5-0 win over Andorra a year ago.

Rashford looks a more likely bet for Southgate's World Cup 26 than Sancho, providing he can shake off his injury, and his form may also put West Ham's Jarrod Bowen (23rd) at risk.

Bowen has won four caps for England having shone for David Moyes' side last season but his level has dipped in the current campaign and while he has kept his place in Southgate's latest squad, he may need to up his game in the weeks ahead if he is to stay there.