Match report and free match highlights as goals from Matty Cash and Leon Bailey either side of a Lucas Digne own goal provides Aston Villa with a 3-0 victory over Everton; Rafael Benitez suffers first defeat as Toffees boss

After a goalless opening period, Matty Cash struck his first Villa goal (66), moments after Demarai Gray had come close to finding the breakthrough.

Villa were then roared forward by a partisan Holte End and doubled their lead three minutes later when substitute Bailey's corner was inadvertently glanced into his own net by Lucas Digne.

Things got even better for Villa and for Bailey as he latched onto Danny Ings' hooked through ball to fire in a third for the hosts within the space of nine minutes before he departed through injury.

The result moves Villa up to 10th in the Premier League while Everton's first defeat leaves them in fifth place ahead of the weekend's remaining fixtures.

Man of the match: Leon Bailey.

Everton headed down the M6 for the 207th league meeting with Aston Villa - the most-played fixture in the English top flight - in a buoyant mood from an unbeaten start but with key absentees.

Jordan Pickford missed out with a shoulder injury while Richarlison was still feeling the effects of the bruising encounter with Burnley. They joined striker Dominic Calvert-Lewin and captain Seamus Coleman in failing to make the trip.

It meant first league starts for Asmir Begovic and Salomon Rondon, while Emiliano Martinez was straight back in the Aston Villa goal having only returned from completing his quarantine in Croatia on Saturday morning.

The visitors made a lively start as Ben Godfrey's low cross was taken in by Rondon but Axel Tuanzebe did just about enough to divert the striker's close-range shot wide of the post. From Andros Townsend's ensuing corner, Rondon flashed a header over.

Everton had lost just two of their previous 17 Premier League away games, however they were indebted to Begovic after six minutes. Douglas Luiz's corner was met by Tyrone Mings at the near post only for the former Bournemouth goalkeeper to adjust his feet and make a sublime one-handed reflex save.

Villa looked to pin their opponents back and an inventive free-kick very nearly paid off. Cash changed the angle for Matt Targett to cross and when Mings laid off Ezri Konsa's header back across goal to Ings, his shot with the outside of his right boot curled a yard over.

With former Birmingham winger Gray jeered throughout, Everton always looked dangerous on the counter-attack and Rondon was inches away from being found at the far post from the in-form winger's inviting cross.

John McGinn took a blow to the head and was later withdrawn in the opening period and replaced by Marvelous Nakamba as Everton were handed an additional concussion substitute, but neither side could find the breakthrough before the break.

Both sides sought to wrestle the initiative upon the restart yet it wasn't until after Bailey replaced Targett on the hour-mark that the second period came alive.

Gray has been reinvigorated under Benitez, and he very nearly made it four goals in as many games when he collected Townsend's pass and curled a low right-foot shot inches wide of Martinez's post.

It proved a turning point as a minute later, Villa found the opener. With Digne switching off, Cash peeled off the Everton full-back to take Luiz's pass, push the ball onto his left foot and steer his shot beyond Begovic high into the net.

Digne's evening got worse as Bailey then took centre stage to play a crucial role in Villa's second from their next attack. It was from his wicked inswinging corner that the full-back could only glance his attempted clearance beyond the rooted Begovic.

Sky Sports' Andy Hinchcliffe said: "This is why set-piece delivery is so important. If you whip a ball in like this, it's brilliant for attackers and a nightmare for defenders. An exceptional ball in from Bailey."

Everton's defence was at sixes and sevens as they looked a beaten side and their misery was compounded when Bailey was found in acres of space to run onto Ings' long ball forward to arrow home his first Villa goal.

Like Raheem Sterling did when scoring for England against Hungary earlier this month, the winger dedicated his strike to Steffi Gregg, a Jamaican influencer who was the daughter of former race car driver Gary Gregg.

It would complete a lively 21-minute cameo from Bailey, who hobbled off to be replaced by Ashley Young with his work done.

Michael Keane headed a Digne free-kick wide of the post, but this was a rude awakening for Everton, their shortcomings exposed in the absence of key personnel. 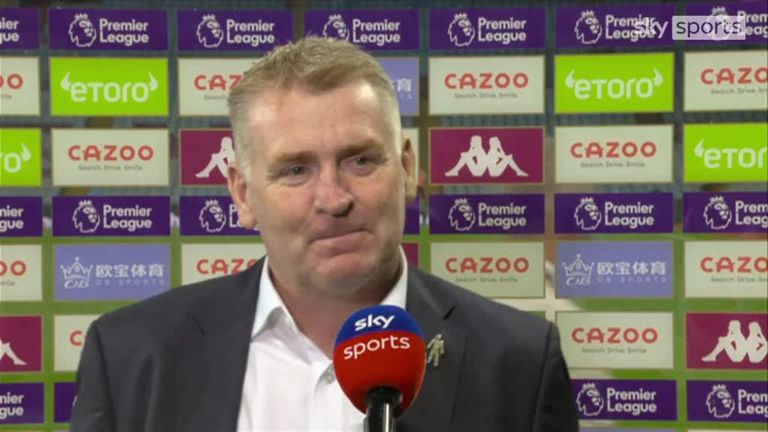 Dean Smith praised his Aston Villa team after their second-half display saw them run out 3-0 winners over Everton with a few superb goals.

Aston Villa boss Dean Smith: "I thought we were the better team in the first half but didn't create as many clear-cut chances as we'd like. I felt five minutes before our goal, they were on top.

"Matt Target was playing really high and I thought why not get Leon Bailey on there.

"Leon put the corner in for the goal and scored the third. The first goal was great build-up and Matt [Cash] has put it in the top bin.

"The fans were brilliant. I've got a special affinity with the stadium and supporters. It's a special stadium - when it's rocking under the floodlights there's no better place.

"We were on the reverse of a 3-0 last week and it felt unjust. I felt we kept up to our standards today." 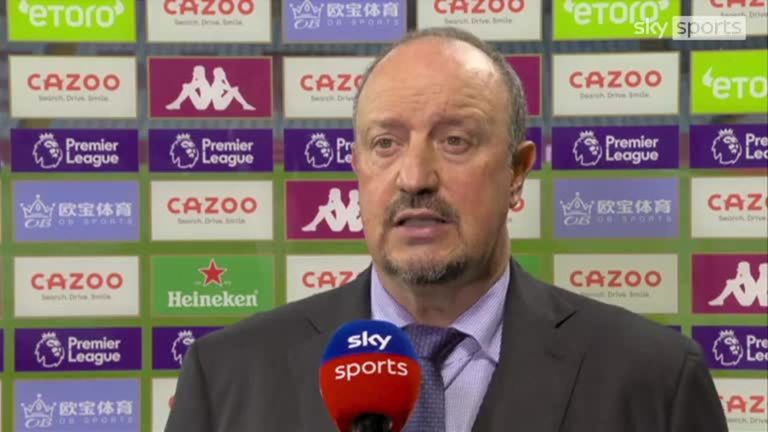 Everton manager Rafael Benitez believes their 3-0 loss against Aston Villa could have been a different outcome after he feels they squandered a few chances with the score at 0-0.

Everton boss Rafa Benitez: "I think that we started the game quite well, we had a lot of situations on the counter in the first half and the final decision was not right.

"We had a couple of chances in the second half then conceded and again soon after. We started with too many problems but the team was fighting well.

"Sometimes if you have players, you can make situations and have fresh legs. In some positions we were short of legs.

"Salomon Rondon, Demarai Gray, Alex Iwobi, we had some situations where it could have been different. We made mistakes too soon, too early, too close and it was difficult to react. Hopefully we can manage that in the future."

Man of the match: Leon Bailey

Bailey has been involved in seven goals in his last seven top-flight appearances (4 goals, 3 assists).

He became the second Aston Villa player to be subbed on, score, and then be subbed off in a Premier League match, after Julian Joachim against Derby in September 2000.

"I thought Leon would lift us a bit," Smith said. "He's really special. He's a really good player. That's why we got him here. He's a good lad, the lads love him. He's really humble and a good person.

"I hope it's just a tight thigh, that's what he said to the doctors. We hope we caught it in time."

"It's such a great feeling - words can't even explain it!" 🤩

"It means so much to me. To accomplish what I did in 21 minutes is such an amazing feeling.

"To have my family there (had his son, girlfriend, brother watching on), to have the fans chanting my name when I was going on, it's such a great feeling. I feel I've welcomed myself here as a Villa player."

"What an impact he had on the game. First, a sensational inswinging corner causing all types of problems with Digne heading into his own net.

"For his goal he had all kinds of space to work in, but it was a difficult strike to make with the bouncing ball. The change from Dean Smith bringing him on took the game away from Everton." 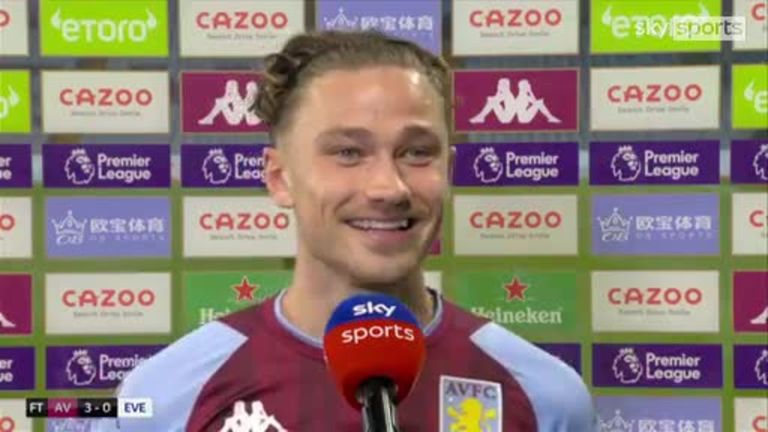 Aston Villa's Matty Cash reflects on their 3-0 win in which he scored a brilliant opener and admits he had even dreamt about that moment the night before.

"The game needed a goal and the final 25 minutes were fantastic from Villa. They were devastating from back to front and attacked with real intent. After scoring the first goal they never looked back."

"Aston Villa really went up a gear and Everton didn't match their tempo. Everton found it very difficult to cope with that. You could point to the fact that Everton were decimated by injury and couldn't name a full substitutes' bench.

"They were missing some really big players but those on the pitch had to try and deliver. Unfortunately, when Villa stepped the tempo up Everton didn't have an answer."

Aston Villa travel to face Chelsea at Stamford Bridge in the third round of the Carabao Cup on Wednesday at 7.45pm before visiting Manchester United in the Premier League next Saturday at 12.30pm.

Everton take on QPR at Loftus Road on Tuesday in the Carabao Cup third round (kick-off 7.45pm) before hosting Norwich in the Premier League next Saturday at 3pm.