Who was the best player you've played with? What were your career highlights? And will you turn to management?

Former Everton and Australia midfielder Tim Cahill answered your questions during an Instagram Live with Soccer AM - and he reserved special praise for his friend and Arsenal head coach Mikel Arteta.

The pair were both signed at Everton by David Moyes during the 2004/05 campaign, with Arteta joining on an initial loan spell in the January transfer window with a view to a permanent transfer.

They hit it off immediately, with the Merseyside club finishing fourth that season to qualify for the Champions League play-offs.

Arteta and Cahill played together for six-and-a-half seasons at Goodison Park, forming an integral part of an Everton side under Moyes that secured six top-eight finishes before the Spaniard joined Arsenal on transfer deadline day in the summer of 2011.

They have remained friends ever since, and with Arteta now in his first role as head coach back with the Gunners following his apprenticeship under Pep Guardiola at Manchester City, Cahill revealed he could see his managerial traits from his playing days.

"You only have to look at the clubs he's played for," Australia's all-time record goalscorer told Sky Sports. "If you go back to Paris Saint-Germain, Barcelona, Rangers, Everton and Arsenal. You only need to think of the coaches he's worked under and players he's been around.

"Mikel was always a coach, even as a player. He would take in information, he listened, and he would always look for other options. At the same time, he would talk to the players constantly.

"He's a good leader and he's someone I struck a good friendship with because we had a natural understanding on the pitch, just from his movements and the way he crossed the ball. We talked in and outside of training, analysing the teams we'd be coming up against and we analysed ourselves.

"I think him being at Manchester City was fantastic, but this had to happen. He had to fly the nest, and Arsenal is an amazing club. Unfortunately, he didn't join a club that I love in Everton with all the speculation, but at Arsenal he's doing an amazing job.

"He has the attributes to first change the culture, what the club is about and the brand of football, and you can already see how the players are taking to that. It'll take time as at City he was flying, but I'm looking forward to seeing how he'll flourish because he's there for the long-term."

Cahill spoke on a range of other subjects during his conversation with Soccer AM's Adam Smith, including a quickfire round of questions...

Who was the best player you played with?

It's simple - Thierry Henry at New York Red Bulls. I was very fortunate to join them after Everton.

At that time, there was also Rafael Marquez and Juninho Pernambucano as well as Henry. We had a few big superstars at a time when David Beckham was in MLS. Playing with someone like Thierry, I learned more off the pitch, listening and watching him.

Sometimes we'd be doing shooting drills, and after doing about 20 minutes I'd just sit on the edge of the 18-yard box watching him just slide the ball into the bottom right. Regardless of his age, everything is about technique. I was very fortunate to have that time with him.

What were your career highlights?

If I start with Millwall, it was getting promoted from the old Second Division, and if I go to Everton, it was finishing fourth in the Premier League in my first season.

If I look to my time with Australia, it was becoming the first goalscorer for my country at a World Cup [against Japan in 2006].

Being able to score five goals in four World Cups as an Australian and to help kids follow their dreams is massive for me because I was the kid that was told growing up that I would never be a professional footballer. So anyone reading this: keep following your dreams!

What do you make of the state of Australian football?

It's really tough to watch the domestic league at present. Unfortunately, it's having a few problems with finances among clubs. It would be great to see the A-League flourish with many of its players in the national team. Hopefully, more can come overseas and play in the top leagues in Europe and around the world.

It's such a difficult time, however. The game is in a little bit of a crisis. Players of teams and coaches are leaving their posts because they can't afford to pay the wages until something can be sorted out with the PFA.

There's so many factors involved, with money coming from broadcasters, and while it's not as big as the Premier League, it's similar to the finances in the lower leagues in England and how that is going to be fixed. Hopefully, after we come back [from the shutdown], things will pick up again, but it's a struggle.

What fond memories do you have of Everton?

He picked players from the Championship, and the great thing was that he had a leadership group that he trusted. 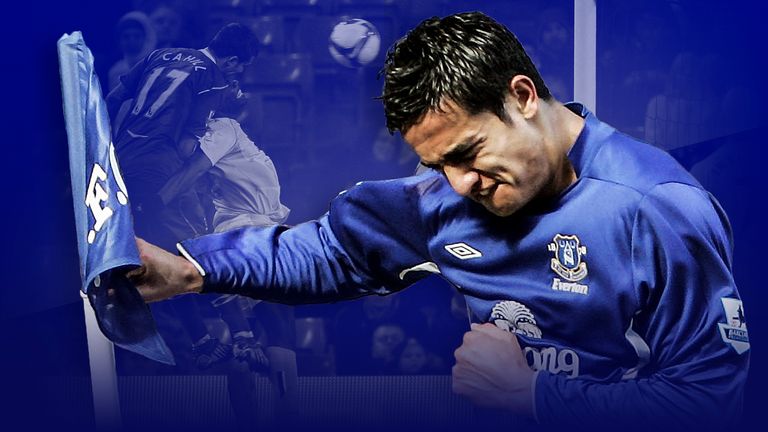 In a September edition of Off Script, former Everton striker Tim Cahill explains how he mastered the art of heading the ball

He let us lead the team, and if we couldn't deal with things, then he would obviously carry the can. But he was always a great leader.

To finish fourth with Everton in my first season with that early group of players - Alan Stubbs, Duncan Ferguson, David Weir, Lee Carsley - was a massive achievement. You can see even nowadays, with all the millions that are being spent, it doesn't guarantee a top six place.

What are your thoughts on present day Everton?

I bumped into Carlo Ancelotti when I was at Finch Farm a few months back, and what a gentleman. He drove past me, he then pulled up, reversed and got out of his car and gave me a big hug. He told me I could come in whenever I wanted. That's what the club is all about.

Marco Silva is a great manager but unfortunately he had some difficult times. I think he needed to be more open and embrace the fans a little more. Results weren't going his way, but you can see the personality of Ancelotti, the aura and the respect that he carries.

He's won the fans over, which is really important because they're a big part of the football club. Everton will certainly improve and I'm looking forward to seeing where he can take the club.

Who's the Premier League's most exciting young player?

I like the look of Mason Mount. I think he's a top goalscorer and he's got a massive career ahead of him.

One of the reasons why I like him a lot is because of his coach [Frank Lampard] and the way that he's trying to mould a player similar to himself. He can lead him and show him the right ways.

You can see that starting to come to fruition with his football this season. I'm a big fan.

Will we see Tim Cahill the manager?

For me, yes, it's definitely something in the future [I'd like to do]. Not in the near future. I've just spent six months at Everton's academy working alongside Phil Jevons (the U16s coach). It's been amazing as an assistant manager to learn about the growth and maturation of players.

It's helped me build up what's important for me when looking at footballers. It's much easier for me to deal with first-team players as that's what I've been used to all my life. I've always been a leader and I've always had a strong voice within the changing room.

I've taken the option now to work with the Everton academy and also in Qatar with the national team, their U16s and U19s in tournaments. I've been lucky enough to rub shoulders with Jose Mourinho and Mauricio Pochettino and other top former players like Xavi.

I'm taking a road where I'm wanting to learn about the youth set-up, the academies, and working my way up. Over time, I'm looking forward to it. I'm putting the hours in and respecting the process.