Portsmouth vs Arsenal. The FA Cup Fifth Round.

Goals from Sokratis Papastathopoulos and Eddie Nketiah either side of half-time sent Arsenal through to the FA Cup quarter-finals with a 2-0 win at Portsmouth.

Arsenal were fortunate to go into the break a goal up, and it came from an unlikely source as Sokratis controlled a volley into the bottom corner from Reiss Nelson's dangerous cross (45+4).

Nelson created the second shortly after the break, taking on his man on the right before delivering for Nketiah to bundle home from close range (51).

Arsenal are now in the quarter-finals for the first time in three seasons, with the last-eight draw taking place on Wednesday evening.

Man of the match: Reiss Nelson.

How Arsenal made safe passage

Arsenal made nine changes in total, including giving January capture Pablo Mari a debut at centre-back, but Portsmouth themselves also rung the changes, making six having played on Friday evening.

Kenny Jackett's side started the stronger at Fratton Park, forcing Arsenal into some desperate last-ditch defending, and registering eight shots on the opposition goal in the first half, but without testing Emiliano Martinez.

Lucas Torreira was taken off on a stretcher with a worrying ankle injury, replaced by Dani Ceballos, and Arsenal should have taken the lead with Gabriele Martinelli struck over at close range from a good Nelson centre. 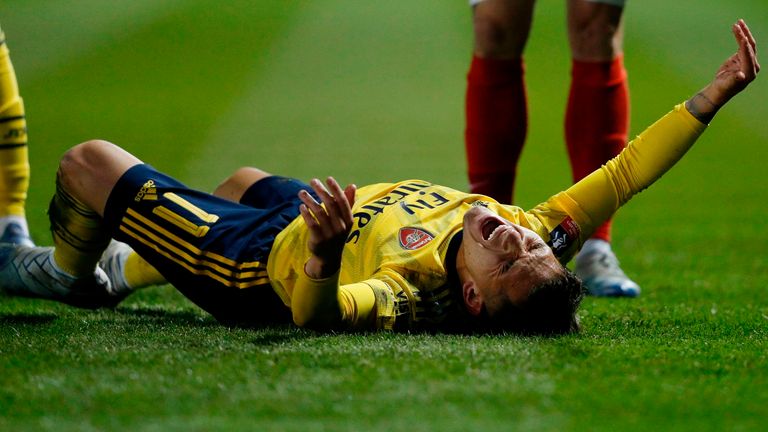 Nelson tried again during first-half stoppage time from the right flank, and this time it resulted in the opener as his superb, whipped delivery was met by Sokratis 10 yards out, the defender placing a fine volley into the bottom right corner.

Nelson was causing problems again six minutes into the second half, easing his way past Steve Seddon before crossing for Nketiah, who netted at the second attempt after not quite connecting with his first effort.

Arsenal loosened up further and looked for a third, but goalkeeper Alex Bass did superbly to tip over Bukayo Saka's left-footed swinging effort.

At the end of the game, Portsmouth were singing about their own trip to Wembley for the Leasing.com Trophy final against Salford in April, but for Arsenal, this competition represents their only chance for silverware this season as Mikel Arteta looks to bring success back to the Emirates.

Arsenal made nine changes from the defeat by Olympiakos in the Europa League on Thursday, with January signing Pablo Mari making his debut and Eddie Nketiah, Bukayo Saka, Joe Willock, Reiss Nelson and Gabriel Martinelli all starting.

Portsmouth did not field their strongest side either, themselves making six changes from Friday’s 3-0 win over Rochdale in League One.

Arsenal fans their first glimpse of Pablo Mari and although there will be sterner tests to come for the Spanish defender, he put in an assured display alongside David Luiz at the heart of Mikel Arteta's defence.

His first touch in an Arsenal shirt was a crucial block as he got his body in the way of Gareth Evans' powerful long-range drive in second minute of the match.

Portsmouth were the better side for much of the first half and they threw everything at Arsenal, but Mari did well to cope with aerial bombardment, making a couple of crucial headers as the Gunners went into the break unscathed.

Arteta's side took full control of the game after the break, which allowed Mari to show some glimpses of his ability on the ball. He kept things simple, making 77 passes with a 89.5 per cent success rate and successfully completed 13 of 17 attempted long balls, but his distribution was excellent.

It was a performance that impressed head coach Arteta. "At a tough place like this, I think he responded really, really well," Arteta told Sky Sports News. "He was steady, he was calm, and he was comfortable on the ball. I was very pleased with him."

Again, there will be stiffer examinations to come and Arteta will need to see more before deciding whether to make his loan move from Flamengo permanent for £8m in the summer, but it's a promising start for the 26-year-old.

Portsmouth manager Kenny Jackett: "We had moments around their box. But they got blocks in and defended well. When we got deliveries in, Emiliano Martinez caught them. We needed those moments and the goal... we needed to get in to half-time at 0-0 and build the tempo in the second half.

"Being 2-0 down against Arsenal, any side in the country will find it difficult. They can get their tails up and make you pay. It can be a lot more than 2-0. We couldn't quite get that goal back. The better side won.

"It's been a great cup run. I'm disappointed we couldn't take it further, but we played against a good side and a good club. We have to put it behind us and look forward."

Arsenal head coach Mikel Arteta: "I'm really pleased with them [the youngsters]. I'm enjoying working with the players. They deserve a chance. It's always a risk but they're worth the risk.

"It was a great atmosphere and Portsmouth made it difficult. We knew we'd have moments we could suffer but we reacted and got control of the game. We got two goals and could have had a few more.

"There is a long way to go. But we're on the right path. We'll see what happens in the draw. We'll keep going because we love this competition."

Arsenal now host West Ham in the Premier League at 3pm on Saturday, while Portsmouth are at Peterborough in League One, also on Saturday at 3pm. The quarter-final draw will take place on Wednesday evening at around 9.50pm.