Match report as Alfredo Morelos scores the only goal of the game to see off Alashkert at Ibrox; John Lundstram sent off just before half-time after a second booking; the return leg is in Armenia next Thursday afternoon

Alfredo Morelos' second-half strike gave 10-man Rangers the narrowest of advantages in the first leg of their Europa League play-off tie against Alashkert at Ibrox.

Rangers, knocked out of the Champions League by 10-man Malmo last week, struggled to break down the limited visitors and then suffered a blow in the 43rd minute when midfielder John Lundstram was sent off for picking up his second yellow card.

The depleted hosts maintained their dominance and Morelos' strike in the 67th minute for the 1-0 win restored confidence ahead of the second leg in Armenia.

Rangers, without suspended duo Glen Kamara and Kemar Roofe, dominated possession from the start, as expected, before the 22nd minute when Ryan Kent's drive from 14 yards kissed the bar on its way over.

In the 35th minute, a low cross from Lundstram took a deflection and beat 'keeper Ognjen Cancarevic but flew past for a fruitless corner.

Then Lundstram, booked 10 minutes earlier for a trip on David Khurtsidze, was dismissed for a tug on the breaking striker Jose Embalo.

Gers left-back Calvin Bassey went down in the box just before half-time but loud penalty claims were ignored.

Midfielder Juninho Bacuna, signed from Huddersfield just before kick-off, took the acclaim of the fans at half-time, before Scott Wright replaced Kent for the start of the second half.

Alashkert defender Rumyan Hovsepyan cleared an attempt from Morelos away from goal before the Colombia striker headed an Ianis Hagi cross past the post from eight yards out.

However, when captain James Tavernier sent an unmarked Morelos racing through, the striker drove low past Cancarevic and Ibrox exploded with as much joy as relief.

While there was no more scoring, the slender lead Rangers take to Armenia next week is one which would have been welcomed at half-time, although there is still work to do. 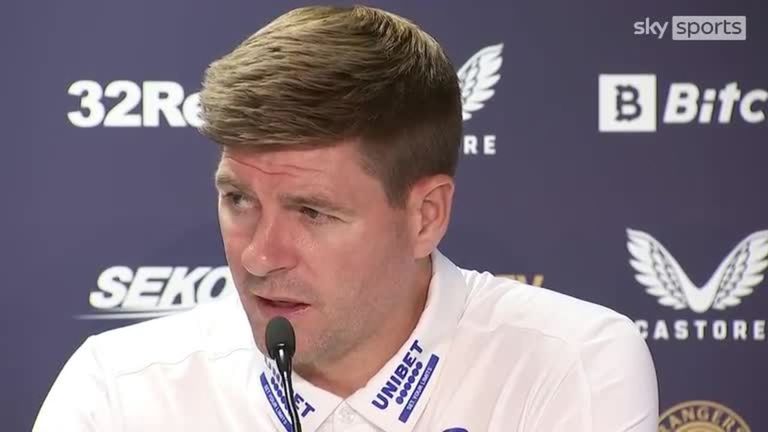 Rangers manager Steven Gerrard: "I've got confidence and belief we can get going and restart and show we can get back to the form we need - but we need to wake up now.

"We're in competitions and we're at a club where you can't afford to be where we are right now. We need to find our level and we need to wake up right now.

"The players listened to what I had to say at half-time and we got a reaction and we went on to win the game.

"I had to be really honest in the dressing room and we got the reaction from the players but if we had got the right performance over the 90 minutes I would be sitting here in a much better position."

Rangers travel to Ross County in the Scottish Premiership on Sunday at 3pm, before facing the return leg at Alashkert FC next Thursday, with the second leg getting under way at 4pm.