Report and reaction as Celtic retained the Scottish League Cup

By Charles Paterson and Max Mathews

Rangers completely dominated the first half, with Celtic goalkeeper Fraser Forster in fine form to tip away Ryan Jack's powerful effort from outside the box and deny a lively Alfredo Morelos three times.

Christopher Jullien broke the deadlock shortly after the interval, volleying in Ryan Christie's free-kick, albeit seemingly from a narrowly offside position.

Despite the goal, the Rangers pressure continued and Morelos wasted a glorious chance to equalise when he saw a penalty saved after he was fouled clumsily by Jeremie Frimpong, who received a red card for the challenge.

But 10-man Celtic held on doggedly, marshalled by goalscorer Jullien and inspired by the superb Forster, as they withstood a late Rangers onslaught to clinch their 10th domestic trophy. Rangers, meanwhile, will reflect on this as a huge missed opportunity, having gone without a trophy since 2011.

How Celtic denied a dominant Rangers

The trials and tribulations of Rangers in the last decade, and their return to a position of challengers under Steven Gerrard, lent extra weight to this occasion under leaden skies and in driving wind and rain. They started strongly, forcing four early corners and pinning Celtic back with a high press.

Morelos came close to his first goal against Celtic twice in a couple of minutes - first when his shot squirmed under Forster, with Jonny Hayes clearing off the line. Shortly afterwards, he evaded Kristoffer Ajer's lunge and advanced on Forster from a narrow angle but the England international saved well at his near post with his legs.

Five minutes before the break Morelos again perhaps should have done better. Joe Aribo battled to win the ball on the edge of the Celtic box and found Scott Arfield, who slid the ball through, but once again Morelos hammered his shot against Forster when a more subtle finish would have been wiser.

Rangers went close again as James Tavernier's tempting cross evaded everyone except Morelos at the back post, who somehow poked towards goal. He and the helpless Forster watched as the ball roll along the goal-line and away to safety. Moments later Forster booted the ball clear from the feet of Morelos after a scramble in the penalty box.

A penalty claim when Scott Brown and Morelos tangled on the edge of the box was waved away by referee Willie Collum, before Morelos saw a free header at the back post palmed clear by Forster.

Both sides had key men out, with Celtic's Odsonne Edouard starting on the bench before coming on, while Rangers veteran Steven Davis missed out on the matchday squad, meaning Joe Aribo came in.

After creating so much, it was galling for Rangers that they should concede such a simple goal from a set-piece. Hayes' free-kick to the far post was coolly side-footed home by Jullien, though replays suggested he and at least one more Celtic player may have been a fraction offside.

Two minutes later Rangers were awarded a penalty and Frimpong sent off, after he fouled Morelos in the box. With captain Tavernier having missed three penalties this season, it was Morelos who stepped up, but he saw his spot-kick saved by Forster. 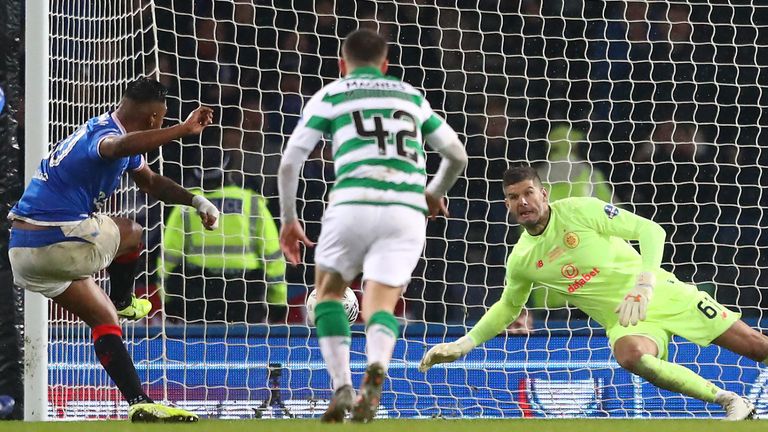 Odsonne Edouard, Nir Bitton and Michael Johnston were sent on to reinforce the embattled cup holders, and Johnston had a wonderful chance to extend the lead on the break after being put through by Edouard, but he clipped his shot just wide of the far post.

As six minutes of injury-time began, Morelos saw one final effort flash past Forster's far post. At full-time, Rangers players sunk to their knees as Celtic's players erupted with joy. "We shall not be moved", sang their supporters. Apt words to sum up a dogged, resilient display - on a day where their superiority was threatened, but not overcome.

Celtic manager Neil Lennon said: "The mentality of the team is amazing. They've won 10 in a row - I don't know how they do it. This team just doesn't know when it's beaten - they still dig it out.

"You've got to give credit to Rangers today they played great and made the cup final what it was.

"We actually played better with 10 men at times. We weren't great today but we still won and that's what cup football is all about."

Rangers boss Steven Gerrard added: "It's still very raw but I can't really ask any more from my players in terms of the performance.

"Alfredo was the nominated penalty taker. It was a very, very big moment in the game with the red card. If you score the penalty with the man advantage there's a big chunk of the game left.

"Over the 90 minutes, we were superior. It always seemed the action was where we wanted it to be but you need to take your chances. Forster's had one of the best games of his career today, unfortunately for us, we've got to give credit where it's due." 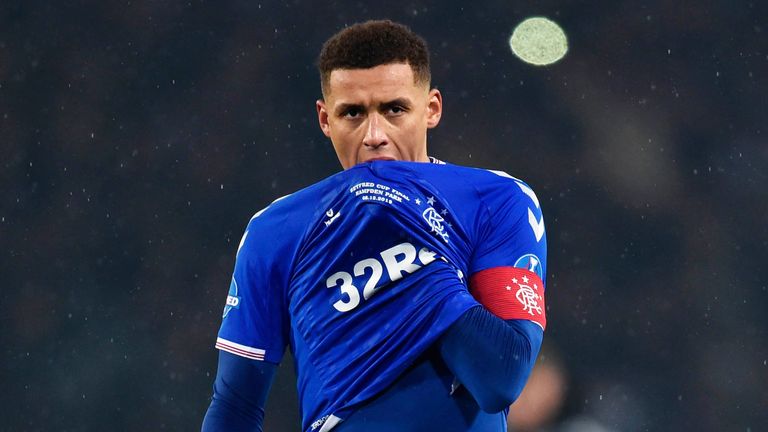 Celtic travel to CFR Cluj for Thursday's Europa League match at 5.55pm, while Rangers host Swiss side Young Boys at 8pm in the same competition.