Ross County 2-4 Rangers: Scottish Premiership champions back to winning ways in the Highlands 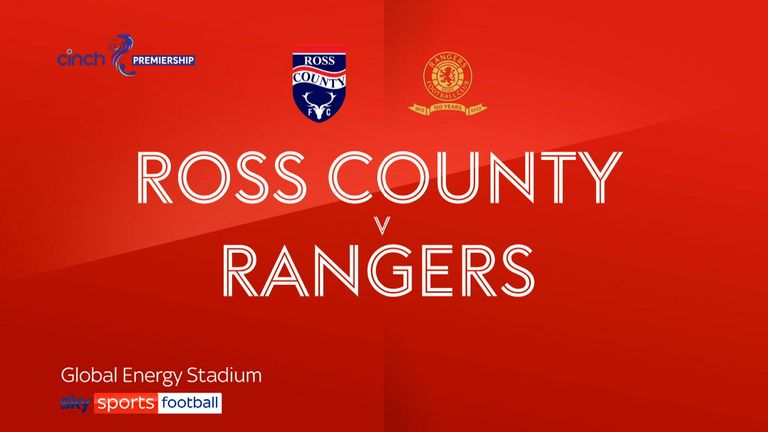 Highlights of the Scottish Premiership clash between Ross County and Rangers.

Rangers got back to winning ways in the league by overcoming Ross County 4-2 to move level on points with Celtic ahead of next weekend's Old Firm meeting.

Steven Gerrard's side, who lost 1-0 at Dundee United last time out, started confidently at the Global Energy Stadium, with Joe Aribo's delightful curler giving them the lead on the quarter-hour mark.

Connor Goldson's header soon doubled that advantage, only for Harrison Clarke's well-taken goal five minutes before half-time to give the hosts hope of an unlikely comeback.

However, Alfredo Morelos restored Rangers' two-goal lead 11 minutes into the second half and despite Jordan White's 77th-minute penalty, substitute Scott Arfield's close-range finish late on saw the visitors move level with Celtic on six points in the table as the two city rivals prepare to meet each other at Ibrox - live on Sky Sports Football - next Sunday.

How Rangers moved level on points with Celtic

Rangers arrived in the Highlands on the back of a rare loss at Dundee United in their previous league encounter, and having watched arch-rivals Celtic move three points above them in the table after a second successive 6-0 home win 24 hours earlier.

And the champions started like a team who knew they could not afford any more costly slip-ups, with Aribo settling any early nerves with an exquisite finish into the top lefthand corner of the net.

Four minutes later and Goldson was on hand to head home a deep corner from the right to seemingly put the visitors in cruise control, only for Malky Mackay's men to pull a goal back totally out of the blue.

The home side may have overcooked their initial free kick into the Rangers box, but they kept the ball alive and after White had forced a smart reaction stop from Allan McGregor, Clarke was there to guide home the rebound from close range.

The hosts handed midfielder Ben Paton a debut, while David Cancola and defender Harry Clarke also made their first starts. And that meant Coll Donaldson and Keith Watson both dropped to the bench from the team that lost 3-0 loss to Hibs last time out.

Rangers boss Steven Gerrard decided to recall midfielder Glen Kamara as the visitors made two changes from Thursday's 1-0 win over Alashkert in Europe. The Finn came in for John Lundstrum, who was benched after getting sent off in that Europa League Qualifying playoff tie, while joining him as a sub was central defender Filip Helander, with Leon Balogun taking his place at the back.

Rangers stepped up the pace after the break and were rewarded for their efforts when Morelos took advantage of Jordan Tillson's poor clearance in the box, after another lung-busting run to the left byline from Calvin Bassey, to place a low shot into the far corner of the net.

But if Rangers thought that was the three points, they were mistaken with David Munro correctly pointing to the spot when Bassey handled Blair Spittal's goalbound effort seconds after McGregor had made an acrobatic stop.

Luckily for Gerrard and Co, though, Arfield was in the right place, at the right time, to latch on to a rebound after Ross Laidlaw had kept out Morelos's angled drive with six minutes to go as Rangers geared up for the first Old Firm clash of the new season in style.

Ross County boss Malky Mackay: "I asked them to make sure they stayed in the game for 90 minutes and we did that.

"When you go 2-0 down after 20 minutes, those are the sorts of game that can run away from you when you play Rangers and it can be six or seven, as has been seen in the past."

"They were playing the best team in the country who have a fantastic squad of players and we are giving debuts every week here."

Rangers boss Steven Gerrard: "I think we can be better and can go on and get five or six.

"That's the way I want my teams to play, organised and hard to play against.

"We want to be as relentless and ruthless in the box as we can be. That is the way Rangers teams should look.

"It was much more like us, both in and out of possession.

"I'm a lot happier today. As you can see quite clearly what we are trying to do.

"We are trying to be more organised at times and we are still trying to fine-tune that.

"We are still waiting to have a full squad and be fully settled so we will get better.

"I thought we showed a lot of quality today and we created a lot.

"James [Tavernier] had a good chance at the end and it could have been one or two more.

"Going forward we looked really dangerous. We have come away from home and got three important points which is the main thing."

Ross County take on Aberdeen at Pittodrie next Sunday afternoon at 3pm.

Meanwhile, Rangers travel to Alashkert FC for the second leg of their Europa League Qualifying playoff round tie, leading 1-0 from the first leg, before hosting arch-rivals Celtic in the first Old Firm meeting of the season a week on Sunday, with the game kicking off on Sky Sports Football at 12pm.