Report and free match highlights as Armando Broja nets his first Premier League goal; Southampton finally register their first three points of the season, sending them into 15th; Leeds fail to have a shot on target at St Mary's 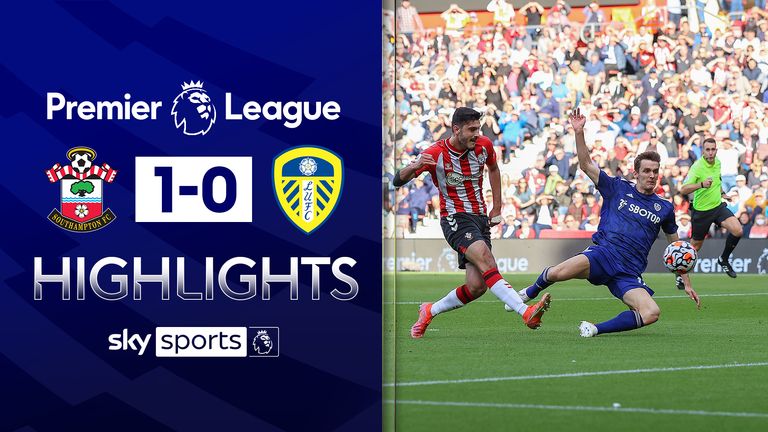 FREE TO WATCH: Highlights from Southampton's win over Leeds

There was pressure on the Saints heading into Saturday's game, having drawn four and lost three of their opening seven league games of the season, while Leeds were looking to build on their first victory of the season against Watford before the international break.

But Southampton dominated against a Leeds side who looked to be feeling the effects of Raphinha, Patrick Bamford and Kalvin Phillips' absences.

After having 12 shots in the first half, it looked to be the same story for Southampton, who have struggled to convert chances this term. But a superb break saw Chelsea loanee Broja slot home from Nathan Redmond's squared pass for his first Premier League goal.

Leeds failed to register a shot on target during the game, and drop back down the table into 17th. Southampton move above them into 15th with seven points.

How Southampton saw off Leeds

It took a little while for the game to get going at St Mary's, but around the 20-minute mark, Southampton had two wonderful chances. Redmond tried his luck from range - already firing wide with a weak effort earlier in the game - but this one forced a superb low stop from Illan Meslier.

Redmond then delivered the corner, which Tino Livramento nodded on. Mohamed Elyounoussi was incoming at the back post with a leaping header, but he missed it by mere centimetres as the ball squeezed wide.

Southampton continued to see the better of the play and the shots, and the Leeds goalkeeper was again called into action as some poor control from Pascal Struijk allowed Elyounoussi into the area. He had to do a bit of work to keep the ball at his feet, but his eventual shot was pushed behind superbly by Meslier.

Meanwhile, Leeds only registered one shot in the first half - Tyler Roberts' effort from range going well wide - and feeling the effects of Bamford and Raphinha's absences.

Seven minutes after the break, and Southampton finally made the breakthrough. It was a superb counter-attack, with Moussa Djenepo's low pass finding the run of Redmond. He easily got in behind Diego Llorente, driving into the area, before squaring for Broja on his right. It was then a slotted finish from the youngster for his first Premier League goal.

Southampton continued to see the better of the play, but almost gifted Leeds an equaliser in the 68th minute. Stuart Dallas pinged the ball forward with Ibrahima Diallo not realising that Dan James was incoming too just behind. The Leeds winger muscled the defender off the ball before sending the ball around the oncoming Alex McCarthy, but it ended up flashing wide of the far post.

But in truth, Leeds offered very little going forward and finished the game without registering a shot on target as an assured Southampton deservedly took all three points.

It was a toss-up between Broja and Redmond for the award, but for scoring his first Premier League goal on his first start, Broja takes the plaudits. He had a joint-high five shots in the game, with two on target and one goal. He was also involved in nine aerial duels, winning 66.7 per cent of them. 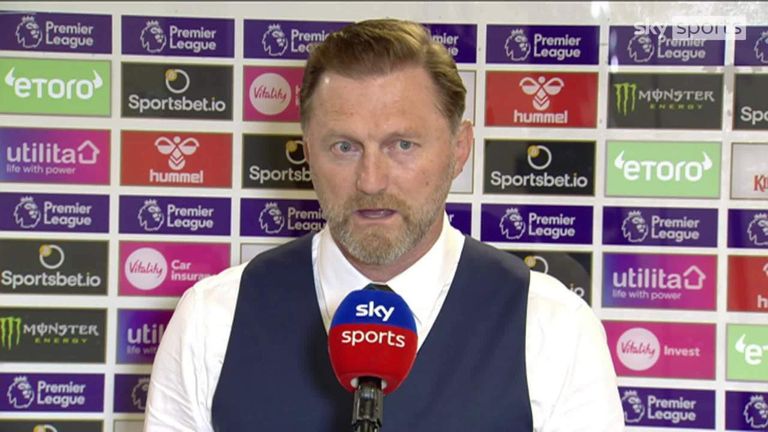 Southampton manager Ralph Hasenhuttl: "The first win is always the most important one of the season. It took a little bit longer this year, but I have to say the performance deserved three points today.

"It was shown from the first moment on, why we wanted to win the game. They [the players] have been very aggressive on the ball with good solutions, and finally with one goal, but it definitely helps to win games.

"It was a demanding game for everybody, but I think the lads did a really good job today. Everybody that was coming back from internationals was immediately there. We had a short two days to prepare for the game, but we did it quite well and it was a very good game, I think.

"Nobody gets it as a present to play, you have to deserve it. He [Broja] also showed with the national team that he can score goals and I think that's what we were lacking. It's clear that you want to put the players onto the pitch that have scored like him.

"Also in attack, Reddy [Redmond] also did a good job today, we had a few outstanding performances, with the back four too and a clean sheet is important.

"Every win is massive. We have been close at times this season to getting three points, but something was missing. Today, everything fit perfectly and I think that's why we won." Leeds manager Marcelo Bielsa: "It was a fair result, we didn't play well in any moment in the game. The difference was produced in the first half. The second half was more even, but the differences that were in their favour in the first half justifies their win even if they scored in the second half. Perhaps the goal was scored in the only minutes that we were perhaps playing on an even keel with them.

"We tried to play the same like always with two wingers and two attackers through the middle and two full-backs that got forward and Klich behind those players trying to organise the play.

"It's not common that we're missing six players, but the team that started the game was formed of players that usually play and who we were in condition to play a more even game. We thought we could dominate and impose ourselves, it wasn't what happened clearly."

Southampton are back at St Mary's next weekend when they welcome Burnley in the Premier League on Saturday. For Leeds, they host Wolves at Elland Road on the same day. Both games kick-off at 3pm.