Match report as St Mirren and Dundee United played out a third successive goalless draw; Peter Pawlett and Marc McNulty passed up the best chances for visitors; Eamonn Brophy’s volley for the home side was ruled out; Jim Goodwin’s men still seeking first league win of the season. 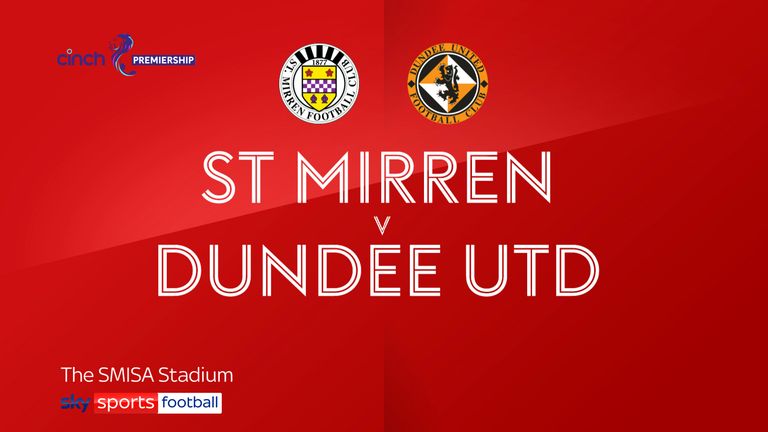 Highlights of the Scottish Premiership match between St Mirren and Dundee United.

St Mirren and Dundee United shared the spoils again as they played out a third successive goalless draw in Paisley.

Peter Pawlett and Marc McNulty passed up the best chances for Tam Courts’ visitors, while Eamonn Brophy’s volley for the home side was ruled out for a foul.

Goodwin made three changes from the side that drew with St Johnstone. In came 16-year-old Dylan Reid for his first start, replacing the suspended Ethan Erhahon, and debutants Matt Millar and Connor Ronan as Richard Tait and Charles Dunne also dropped out.

United were beaten by Hearts in their previous outing and Courts made five changes from that line-up, giving debuts to Ilmari Niskanen and Scott McMann. Pawlett, Calum Butcher and Ian Harkes also started, with Jamie Robson having left the club and Dylan Levitt, Nicky Clark, Adrian Sporle and Chris Mochrie all dropping out.

Niskanen could have made an impact with the first United attack of the game but dragged his shot wide of target.

The visitors came closer with the first clear-cut chance of the game midway through the first half. Pawlett’s run created the chance for McNulty and when his shot was partially saved, defender Joe Shaughnessy had to be alert to head the dropping ball over the crossbar.

Pawlett then missed an even better opportunity moments later when he thrashed his shot high over the bar after being picked out by McNulty.

It was one-way traffic late in the first half and Charlie Mulgrew was next to threaten with a free-kick that Jak Alnwick grabbed.

St Mirren finally registered a shot of note early in the second period from Jamie McGrath, whose effort was well wide.

The home side then thought they had made the breakthrough after an hour when Brophy volleyed in a header from Curtis Main, only for referee Colin Steven to rule it out for a foul.

United were next to threaten in an increasingly open game through substitute Louis Appere, whose drive was deflected wide.

And the visitors really ought to have scored after 71 minutes. McNulty sprung the offside trap and raced through on goal but the striker somehow slid his shot wide of the post.

It was end to end now, with St Mirren having the bulk of the pressure and United threatening on the counter.

Tait thought he had made the breakthrough with a snapshot, only for Trevor Carson to pull off a brilliant save.

St Mirren manager Jim Goodwin: "There was a bit of grappling at the back stick with Curtis and the United defender but I'm not convinced it was a foul.

"We have to remember that it's a contact sport at the end of the day. I'm not so sure you would get a penalty the other way. It's too easy nowadays to chalk goals off and that's another we've had disallowed.

"I think there's too many occasions when defenders get let off the hook awfully easy now. You see them going down under the slightest touch, falling down and getting a foul too easily.

"For me that goal should have stood. It's those fine margins we keep talking about."

Dundee United manager Tam Courts: "That's the life and times of a number nine striker. He is a guy of high quality, I'm sure he's had and missed chances like that before and if he was running through on goal one-on-one next week that's the guy I would want to do that. This is a guy of international pedigree, he is a quality striker.

"Our problem historically was actually creating the chances so to come off and see four or five really good goalscoring chances gives me a lot of hope moving forward to next week's derby game.

"We're frustrated to actually go home with only a point but I've got to commend the players for their attitude, application, drive in the game and also being resolute at key times as well.

"I think we could have had a breakthrough today if we actually scored the three or four goals our play was entitled to. But unfortunately we've had to take a point, it's a clean sheet and we move forward."