Match report as Khadija Shaw netted an impressive double, scoring either side of the break; Lauren Hemp demonstrated magical footwork before taking Man City's goal tally to three; Gareth Taylor's side rise to fifth in the WSL table; Spurs remain eighth ahead of Sunday's action 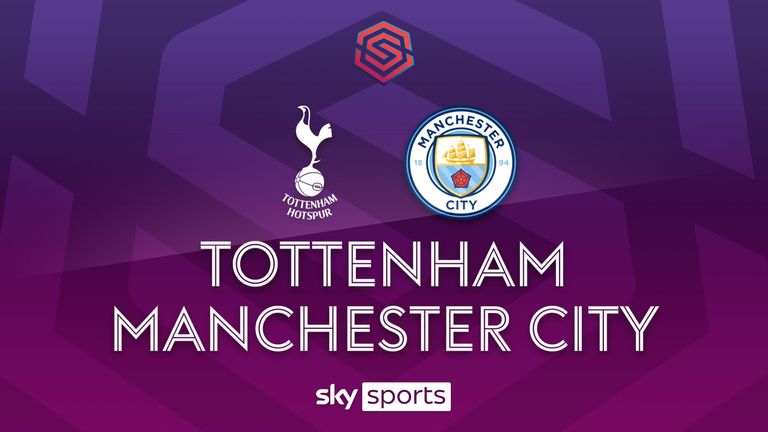 Highlights of the Women's Super League match between Tottenham and Manchester City.

Khadija Shaw's ruthless double and a signature Lauren Hemp strike earned Manchester City a convincing 3-0 win over Tottenham as they continued to get their Women's Super League campaign back on course after a disappointing start.

Having begun the season with back-to-back defeats, Gareth Taylor's side have recovered impressively to earn maximum spoils from their proceeding two encounters, seeing off both Leicester and Spurs.

Shaw, scoring her 13th goal in as many starts, made the initial breakthrough in the 42nd minute, glancing a header beyond Becky Spencer from Alex Greenwood's pinpoint delivery, before firing an emphatic second into the bottom corner of Spencer's net two minutes after the restart. 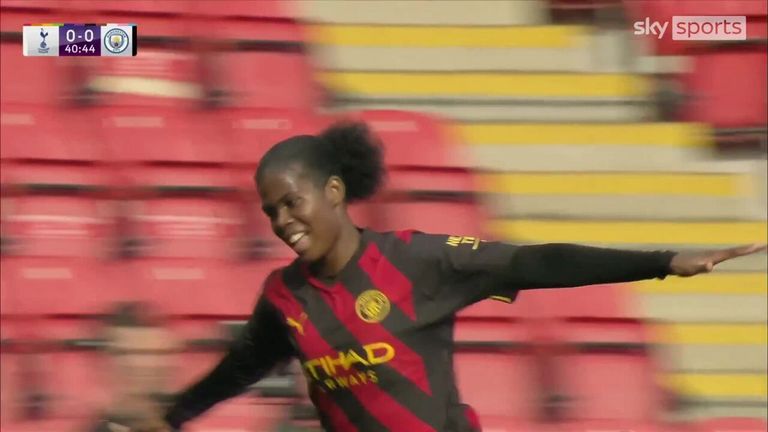 Bunny Shaw puts Manchester City ahead against Tottenham with a superb header from a corner.

The forward had chances to complete her treble, but was guilty of wastefulness when teed up by the mazy run of midfielder Laura Coombs, eventually dragging her shot uncharacteristically wide of the mark.

Hemp rounded off a comprehensive attacking display midway through the second period, squeezing home a fierce low drive from a tight angle to put the gloss on a particularly complete away performance from rejuvenated City, who rise to fifth in the table as a result.

Man City, along with Chelsea, are one of only two sides to have a 100 per cent win rate in the league away at Tottenham - and their impressive record was never really under threat in their latest meeting, with Shaw and Hemp making light work of another fruitful visit to north London.

Spurs, playing only their second game at their new Brisbane Road home, stifled City's productivity in spells with Shelina Zadorky and Molly Batrip doing their best to keep Shaw quiet, but there was an air of inevitability about the striker's presence. 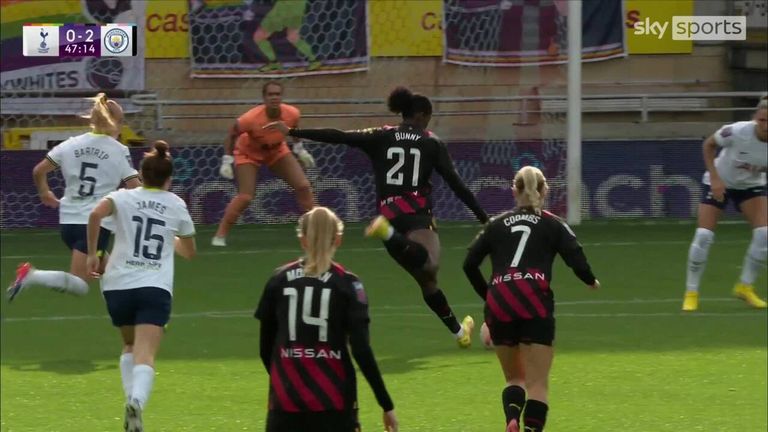 Bunny Shaw scores her second of the day for Manchester City with this powerful long-range effort.

City's firepower, which was lacking in their opening two encounters, was impressivley restored in no small part thanks to the Jamaica forward, who took her season's tally to five goals and is currently the league's top scorer.

Coombs was equally majestic in midfield, bagging herself a pair of assists, but it will be the contribution of Hemp who is likely to steal most of the day's headlines. Her showstopper was another reminder of the talent she possesses with a football at her feet.

The winger jinxed inside Bartrip and was unfazed by the onrushing Zadorsky as she rifled her left boot through an arrowed shot that went in neatly off the far post in the 76th minute. A poignant message to England manager Sarina Wiegman on the very same day the Lionesses learnt their group opponents for next summer's World Cup.

The game, packed with entertainment value, was slightly overshadowed by an early injury to Spurs striker Ellie Brazil, who was stretchered off after an awkward clash with City goalkeeper Ellie Roebuck. Manchester City boss Gareth Taylor says his team were fully deserving of the 3-0 win over Tottenham and admits he wanted even more goals from his team.

"I thought we were good in both boxes. I don't think we had too much to contend with and I think that's because we got it right at the other end of the pitch in terms of our press. When they did get through, our defence dealt with it really well. I can't remember Ellie having to make a save.

"It was a really dominant performance from us and we probably should have scored a few more goals because I'm greedy and want more as usual. But I think coming here with a new team, I thought the goals were top.

"I just really liked the way we went about it. We were brave in our play. Bunny had a great season last season and I think people overlook that a bit. She had strong competition playing against Ellen White, but she's realising now that she's the No 9 for this club and she has started the season really well." 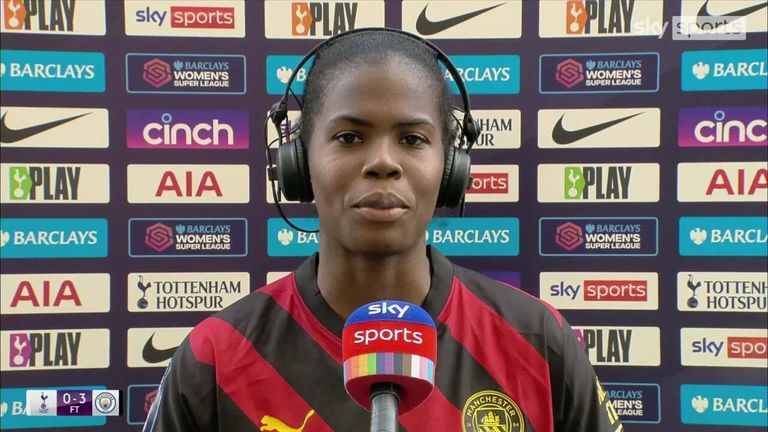 "The position I play in, the team look for me to score goals and I've been working on the training pitch, being at the end of crosses and perfecting what I am good at. I just try to take it game by game and achieve my objectives.

"For sure [it is a joy to play with Lauren Hemp and Chloe Kelly]. It starts on the training pitch we have been practising and making the movements. They are two incredible players, and I am lucky to be on the end of the crosses from them."

Rehanne Skinner's Tottenham travel to Brighton on October 30, while Man City are next in action on the same day, hosting newly promoted Liverpool. Both ties kick-off at 2pm.

Inside the WSL - Hosted by award-winning broadcaster and journalist Jessica Creighton, Inside the WSL is a comprehensive round-up of all things Barclays FA Women's Super League and women's football. Airing weekly on Sky Sports Premier League, the half-an-hour show will review and preview matches, including in-depth analysis and exclusive player interviews. Viewers can expect gripping behind-the-scenes access as well as a summary of all the action both on and off the pitch.

Sky Sports Social - Alongside coverage and visibility for the league across all Sky Sports' main social media channels, the bespoke Twitter channel @SkySportsWSL will continue to be the home of all Barclays FA WSL content on Sky Sports.

Sky Showcase - All Sky customers will benefit from being able to watch the opening weekend fixtures on Sky Showcase (channel 106) without a Sky Sports subscription. This channel is designed to curate some of the top shows, films and sports from across Sky's channels.

Sky Sports digital - Follow all the latest from the WSL across SkySports.com and app, including exclusive features and interviews, plus dedicated live blog coverage and in-game clips from games live on Sky Sports. You can watch free match highlights from every WSL game this season on Sky Sports' digital platforms and YouTube channel.