Vinicius owed much of his first goal to luck with the impressive Dele Alli's pass towards Lucas Moura taking a big deflection into his path, allowing him to run through unchallenged and beat Plamen Iliev from 12 yards.

Tanguy Ndombele forced the goalkeeper into a low save after a bursting run from midfield from which Alli unselfishly squared for Vinicius to tap in a second before half-time.

Ludogorets failed to manage a shot on target across the game, while Spurs continued to turn on the style, with Winks looking up and firing in from the left touchline, some 50 yards out, to add a third after the break, before Moura put the icing on the victory with a composed finish from Vinicius' lay-off.

The win, Spurs' fifth in a row in all competitions, leaves them a point away from qualifying for the last 32 with two games remaining.

How Tottenham strolled to victory

There had been questions in some quarters whether Thursday night's match would go ahead at all with Ludogorets' preparations so badly hit, but their Covid-decimated side barely put up a fight from the first minute to the last.

Within a minute Spurs' first move of the game could have ended in a goal had Moura timed his run to the far post better from Matt Doherty's right-wing delivery, a move which set the tone for a first period which barely saw the ball leave Ludogorets' half.

With a quarter of an hour gone, they made the breakthrough, although in slightly farcical fashion as Alli's through-ball, intended for Moura, took a massive deflection into the path of the unmarked Vinicius, who found himself clean through and slotted the ball under Iliev.

Gareth Bale curled just over the bar from Vinicius' lay-off before the forward netted his second of the night thanks to some selfless work from Alli, whose pass when he could easily have scored himself put the ball on a plate for the Brazilian forward.

Moura went close with another effort within moments of the Ludogorets kick-off, and played a part in another chance when the visitors restarted the game for the second half, too, with Vinicius just unable to get a toe onto his flick-on less than a minute after the break.

Winks' wonderful pass then set away Doherty to cushion a header towards Bale, who forced a smart save from Iliev, before the midfielder entered an early effort into next season's Puskas goal of the season award with a 55-yard stunner from on the left touchline, which beat Iliev before bouncing in off the crossbar. Did he mean it? Only he knows.

Three became four as Spurs continued to press Ludogorets from the front, with Pierre-Emile Hojbjerg robbing the ball back to feed Alli, whose low cross was touched onto Moura by Vinicius, and the winger beat a stranded Iliev with a rising effort.

Jose Mourinho then took the opportunity to give some of his younger players a run-out - including taking off Joe Hart to give Alfie Whiteman a debut in goal, as well as introducing forwards Dane Scarlett and Harvey White.

Tanguy Ndombele was Tottenham's only survivor from their 2-0 win over Manchester City at the weekend, with Dele Alli and Gareth Bale both starting.

They came close to capping a perfect night for Spurs with Scarlett taking down Winks' excellent long pass and forcing a smart save from Iliev, before moments later teeing up White to miss the far post by a couple of feet.

He went close again in added time, taking Vinicius' touch in his stride before side-footing wide from a tight angle, as Spurs kept their intensity until the last to put themselves on the verge of qualification for the knockout stages. 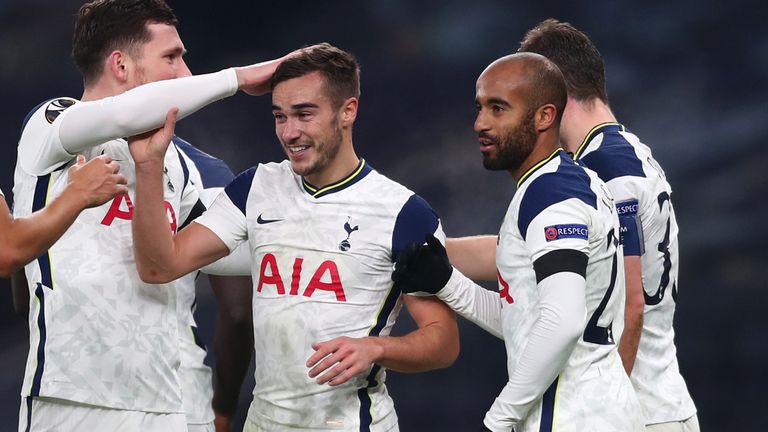 Tottenham head coach Jose Mourinho says that Harry Winks admitted that he didn't mean his wonder goal against Ludogorets but he was delighted with the way he and his team played.

Tottenham boss Jose Mourinho told BT Sport: "It was important. There is a risk of every team getting six points against Ludogorets, and if that happens, to qualify you need a lot of points.

"Normally nine points would be job done, but it's not done. You need a result, but if you can finish first, we are going to try. Today it was important we made lots of changes, it was important to take it seriously, and it was good.

"[Harry Winks] is too honest! I'm not happy with him, a goal like that I told him you have to say you wanted to do it. But he's a good kid, and he told the truth.

"Every game is important, we don't look to a certain competition, we look to game after game. To play the same players is not good for their condition, or the mentality of the ones who are not playing. If you work hard, you deserve to play, I can only start 11 but I want to give chances to everybody."

Man of the match - Carlos Vinicius

By a whisker, Vinicius shaded Alli to be the best player on the pitch by virtue of his two first-half strikes, and his assist for Moura's goal - in a game where the Brazilian showed perhaps he can be the understudy Harry Kane has sought for so long.

His first goal, fortuitous though it may have been in its making, showed smart composure to finish before he got himself in exactly the right area for his second. With a touch more fortune, he could have had a hat-trick inside barely 45 minutes.

It is master against apprentice on Sunday when Jose Mourinho's Spurs travel to Frank Lampard's Chelsea on Super Sunday, live on Sky Sports Premier League from 4pm; kick-off at 4.30pm.