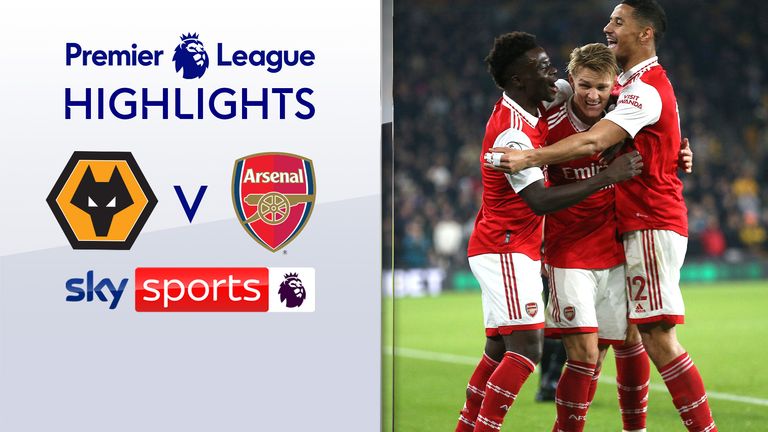 FREE TO WATCH: Highlights of Wolves against Arsenal in the Premier League.

Martin Odegaard scored twice as Arsenal won 2-0 at Wolves to capitalise on Manchester City's defeat and open up a five-point lead at the top of the Premier League over Christmas.

Arsenal were already guaranteed top spot in the Premier League over the festive period after Brentford stunned the Premier League champions earlier on Saturday, but with new boss Julen Lopetegui watching in the stands, Wolves frustrated the Gunners in a goalless first half at Molineux.

It looked as though Arsenal would head into the World Cup break with just a three-point lead at the summit until captain Odegaard tapped Fabio Vieira's cross in from close range (55). The Norwegian then clinched a seismic victory for Mikel Arteta's side with his second (75).

Man of the Match: Martin Odegaard

Arsenal's 12th league victory of the season opened up a 14-point buffer between themselves and fifth-placed Manchester United in the race for Champions League football, though that early-season objective has surely been cast aside by the Gunners' relentless pursuit of a first league title since 2004.

Arteta said: "Nobody expected us to be where we are right now. I am more focused on our way of playing, our way of living together, the atmosphere we have around Colney and what we have generated with our supporters in our stadium. That is much more powerful.

"It's great to be where we are, we are enjoying that moment. We have a big break, we have to reflect on what we are doing and we are very much prepared for what is to come after the World Cup.

"When a team is in the moment you want to carry on playing. It's not possible so we have to use the time now in the best possible way.

"Our aim is to play better as a team every single day, to have better tools to do what we want to do on the pitch."

Wolves introduced new manager Lopetegui to the Molineux crowd before kick-off and the Spaniard will have been impressed with his side's resilience, particularly in the first half, despite the result.

After Gabriel Jesus saw his early effort chalked off for offside and goalkeeper Jose Sa tipped Bukayo Saka's deflected cross over, Arsenal lost the influential Granit Xhaka to illness on the quarter-hour mark. His replacement Fabio Vieira ensured the visitors retained control of the ball, but Wolves were potent on the counter.

Goncalo Guedes fired over after being played in behind by Nelson Semedo, and the Portugal international thought he should have been awarded a penalty following a collision in the area with William Saliba, but VAR deemed it not to be a foul. 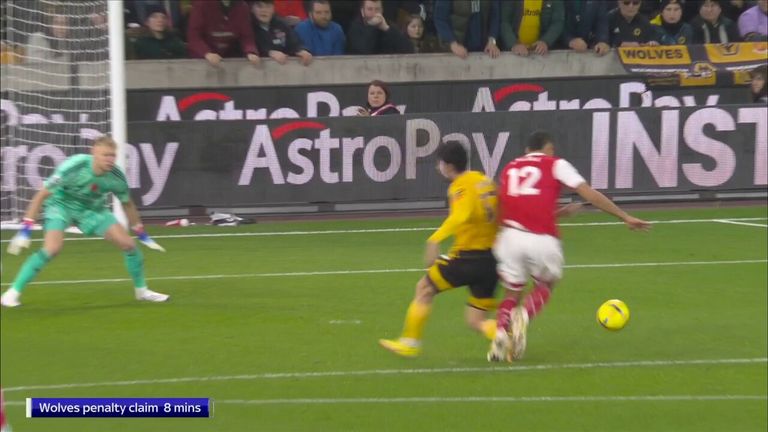 The Saturday Night Football panel debate whether Wolves should have been awarded a penalty for William Saliba's challenge on Goncalo Guedes in the first half.

Jesus had two chances to end his 10-game goal drought before the end of the half but clipped the top of the Wolves crossbar before shanking a volley wide after Ben White's cross reached him unmarked at the back post.

Those misses nearly came back to haunt the Gunners, with Guedes pouncing on Saliba's blind pass only to see his shot deflect past the post, but a frustrating first half was forgotten about within 10 minutes of the restart as Odegaard struck. 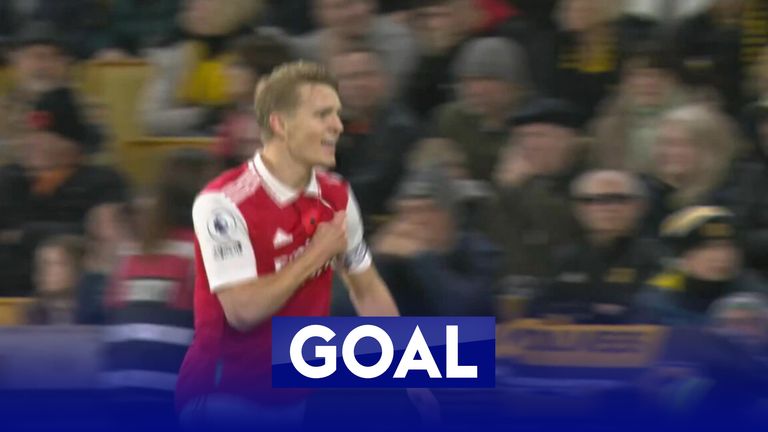 Martin Odegaard is left with a simple finish to open the scoring after Arsenal find a way through the Wolves defence.

Jesus played Vieira in behind the Wolves defence and his ball into the goal mouth was dispatched by Odegaard, who had the simple task of converting from a matter of yards.

The victory was secured 15 minutes from time when Odegaard rifled a rebound into the bottom corner after Gabriel Martinelli was denied by Sa, sealing Arsenal's place at the Premier League summit and further fuelling hope this may be the Gunners' year. 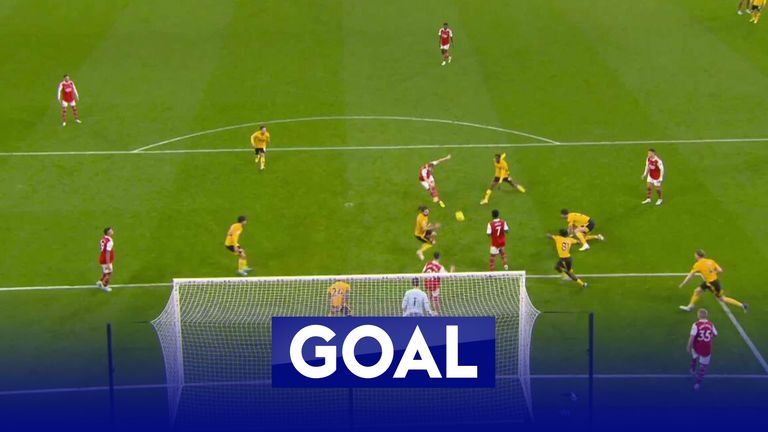 Martin Odegaard scores his second goal of the game to give Arsenal breathing space against Wolves.

Can Arsenal win the Premier League?

"If Leicester can win the Premier League, why can't Arsenal? Everything is still possible. Manchester City are still favourites, I think they will win it because of the quality they have, but for Arsenal to be in this position is an achievement.

"I don't think anybody would have put them in the top four, and yet they are 14 points ahead of fifth-place Manchester United. Getting into the Champions League and taking that next step would have been Mikel Arteta's objective at the start of the year, it would be amazing were they to throw that away.

"But, right now, Arsenal have got themselves in such a position that they have got to believe. They might need to add players in January but if they can do that and keep players fit, anything is possible."

Arteta: Patience pays off for Arsenal 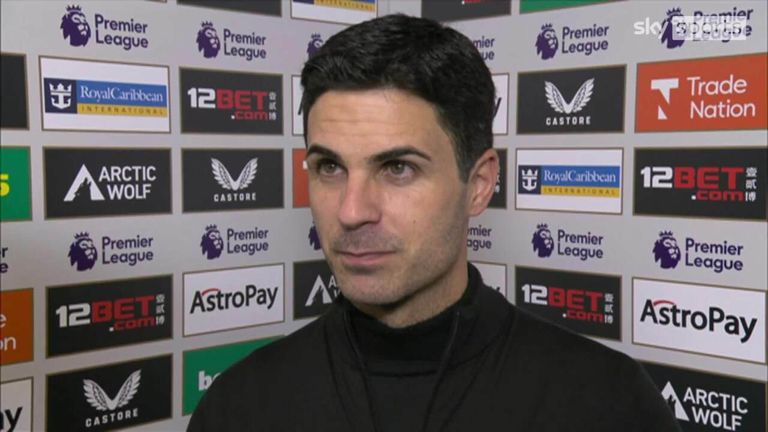 Arsenal boss Mikel Arteta shares his thoughts on the Gunners' 2-0 win over Wolves and was pleased with the teams patience and resilience as they go into the World Cup break top of the Premier League.

Arsenal manager Mikel Arteta told Sky Sports: "Today was about being very patient. The game Wolves proposed made it difficult to attack spaces and it was very easy to get impatient and frustrated.

"We wanted to get away from that game because they were waiting for a mistake to catch us on the break. We did better at the end of the first half, we started the second half really well and we created enough chances to win the game.

"Mentally this week was a tricky one. We played two-and-a-half days ago, we had to come away from home again. But that is the mentality you have to have if you want to be at the top.

"It's been a long, long time since we have been in this position. The fans fully deserve it for the full transformation they have created at the club with their energy, passion, involvement, and what they have been able to transmit to the players."

Davis: Wolves should have had penalty 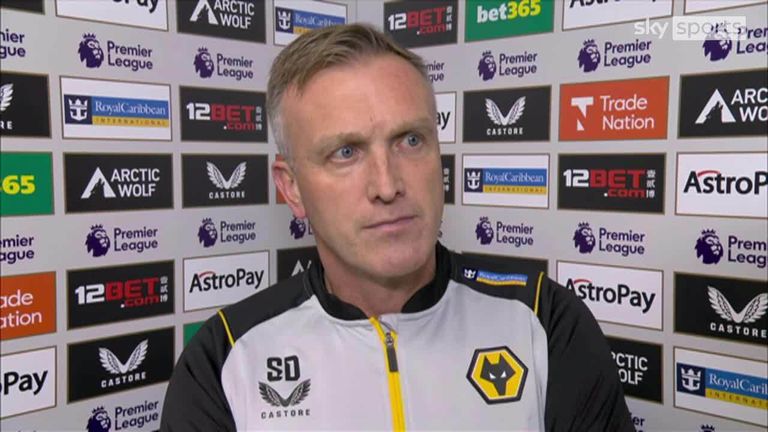 Wolves boss Steve Davis feels his side should have had an 8th minute penalty after William Saliba's challenge on Goncalo Guedes during their 2-0 defeat to Arsenal.

Wolves caretaker Steve Davis told Sky Sports: "I think we had good moments in the game. They had a lot of possession, we slowed them down. The shape was fantastic and hard to get through, we defended the box when we had to.

"We were happy at 0-0. The decision in the first half should've gone for us. He's onside and it was a foul and he was the last man, so it was a goalscoring opportunity and potentially a red card. We feel hard done by because those moments are really important to us at the moment.

"It changes the mentality even more, defending a goal that you should've had. VAR, not sure whether they use it - no point in having it if you're not going to use it. They have to decide if they want VAR and if they do they need to use it."

Man of the Match - Martin Odegaard

Martin Odegaard is Arsenal's top Premier League goalscorer this season (6 goals), while only Kevin De Bruyne, James Maddison and Leandro Trossard (6 each) have been involved in more away goals in the competition this season than Odegaard (5 - 4 goals, 1 assist).

West Ham visit Arsenal on Boxing Day at 8pm after the World Cup break while Everton host Wolves on the same day at 3pm.