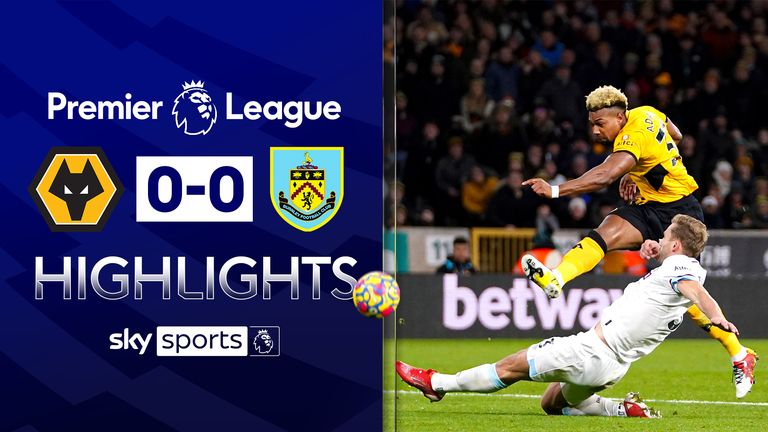 FREE TO WATCH: Highlights from Wolves’ draw with Burnley in the Premier League

Wolves and Burnley played out a goalless draw at Molineux that left Sean Dyche's side the happier of the two teams.

Adama Traore came closest to scoring when his first-half shot hit the underside of the bar but Wolves had to settle for a second successive goalless draw.

Bruno Lage's men remain in sixth place in the Premier League table, but their run of three consecutive home wins comes to an end. Meanwhile, this hard-earned point is enough to lift the Clarets above Norwich and into 18th.

Man of the match: Charlie Taylor

Wolves dominated possession from the outset with Burnley content to play on the counter-attack and wait for the set-pieces but the home side created little.

Indeed, their best opportunity in the first half came on the break themselves when a block from a Burnley corner fell nicely for Traore and he raced towards goal.

Raul Jimenez was up in support to the left but Traore went right instead and fired off a wicked shot that ricocheted back off the underside of Nick Pope's crossbar.

Traore was the game's most potent threat and moments later he danced away from two defenders and did slip Jimenez in, only for Charlie Taylor to come up with an excellent tackle.

At the other end, Burnley's threat was intermittent with Maxwel Cornet coming closest only to be met with Jose Sa rushing off his line to cut out a cleverly taken free-kick.

Bruno Lage made two changes to the team that drew with Norwich. Leander Dendoncker came in for the suspended Ruben Neves, while Francisco Trincao made way for Adama Traore.

Wolves continued to push after the interval but the ball would not drop for Hee-Chan Hwang and another sensational Traore run came to nothing.

Lage was gesticulating to the home crowd to rally his team but that final bit of quality in the final third was lacking throughout and there was no clear-cut opportunity for his team.

Indeed, Sa was tested by Dwight McNeil at the other end late on. It was the only save that the Wolves goalkeeper had to make.

The frustration for many at Molineux was that his counterpart in the Burnley goal had little more to do himself.

Wolves boss Bruno Lage: "The players did everything I asked. We were playing against a hard team to play. Our centre-backs were amazing. There were good things we did. Of course, I am disappointed by the result. But it is one more point in the Premier League."

Burnley boss Sean Dyche: "The defensive structure was excellent. Charlie Taylor was outstanding. He continues to perform. He is adding that quality in the final third. I think he should be around the England group. I think he was absolutely outstanding tonight."

Wolves now host Liverpool at 3pm on Saturday in the Premier League, while Burnley are at Newcastle at the same time.