Match report as Jota scores the winner to keep Celtic top of the Scottish Premiership; Celtic were 2-0 up at half time; Christian Ramirez and Lewis Ferguson pulled Aberdeen back level; Celtic lead Rangers by one point in the title race 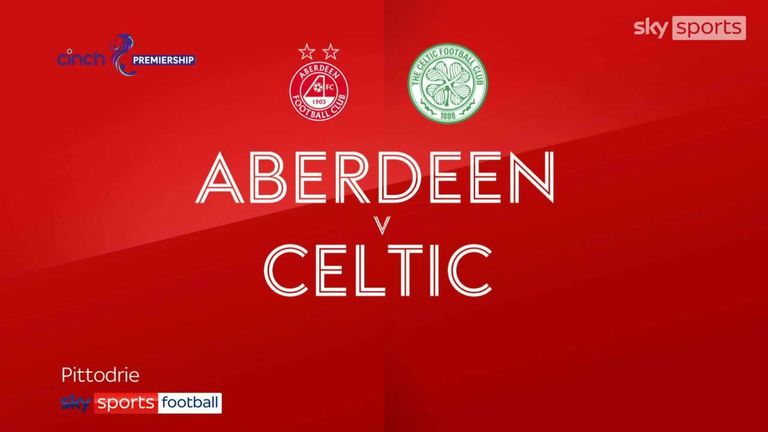 Highlights of the Scottish Premiership match between Aberdeen and Celtic

Celtic remain top of the Scottish Premiership after Jota's double secured the points in a five-goal thriller at Aberdeen.

The Portuguese winger knocked the ball in in at the back post after poor home defending before Matt O'Riley's deflected second put the away side firmly in command.

But the visitors responded instantly as Jota drilled home the winner.

It is another massive win for Ange Postecoglou's side, who are now 20 league games unbeaten.

Aberdeen, who last won in the Scottish Premiership on Boxing Day, drop to ninth.

It was another frustrating night for the home side and their supporters, who have not enjoyed a Pittodrie win over Celtic since 2016, while Postecoglou's side showed their mettle.

The early hustle and bustle of the game saw the Dons, with skipper Scott Brown, centre-back Declan Gallagher and midfielder Dylan McGeouch back in the side, trying to impose themselves on the Parkhead outfit.

However, the well-versed visitors, who had Jota and O'Riley in for Giorgos Giakoumakis and Tom Rogic, remained calm.

Indeed, Celtic should have taken the lead in the 12th minute when overlapping right-back Anthony Ralston found Daizen Maeda with a pinpoint cross but the Japan striker headed wide from 12 yards.

However, only five minutes later Aberdeen keeper Gary Woods and defender Calvin Ramsay failed to deal with a curling O'Riley cross from the right and Jota stole in between them at the back post to knock the ball in from close range.

There was soon more trouble for the Dons when O'Riley's shot from the edge of the box, after moving on to a pass from Maeda, took a deflection off Aberdeen defender David Bates and ended up behind Woods.

It was a first counter for O'Riley following his move from MK Dons in January and it had the league leaders cruising.

Stephen Glass reshuffled at the interval and Funso Ojo and Matty Kennedy replaced Ramsay and McGeouch for the start of the second half - and what an impact they made.

The Dons got themselves back into the game when Ojo set up Ramirez and he swept a drive low past Hoops keeper Joe Hart.

Suddenly there was hope and moments later Ramirez had the ball in the Celtic net again but the offside flag was up. However, it was all-square in the 61st minute when Ojo's free-kick from wide on the right was glanced in by Ferguson.

The home fans were still celebrating when, a minute later, Celtic ran up the park and Jota moved on to a Ralston header before bouncing a shot past Woods to make it 3-2.

Referee Willie Collum stood firm against the protests of the Aberdeen players presumably claiming Liel Abada had initially been in an offside position.

There was more goalmouth action at both ends as the two sides kept gunning for goals, with Ferguson having a header saved by Hart before flashing a free-kick just over the bar.

Maeda and Reo Hatate made way for Giakoumakis and Nir Bitton in the 75th minute and prevented Aberdeen's quest for a third goal and although the Dons can take some encouragement from their second-half performance, Celtic again showed they know what it takes to get the job done. Aberdeen manager Stephen Glass: "I was [furious with the goal] as well. From the side he looks offside but regardless, he fouls Batesy and stops him running back to deal with Jota who scores the goal.

"Again, I say it very week, I don't want to talk about referees but there is a reason you ask me these questions.

"I was warned or told before the end of the game by the fourth official (Craig Napier) not to go on the pitch and speak to the referee but he didn't tell both managers, he told one manager and maybe because he realised he made a mistake.

"The fourth official was told to tell me not to speak to him on the pitch after the game but both managers didn't get treated the same, maybe there is a reason.

"That approach of determination not to get beat, and will to win that was potentially missing in the first half, was really there in the second half.

"There was a belief in our performance and what we were doing, the energy felt different. It is very easy to get beat by a very good Celtic team but we were a lot better in the second half."

Celtic manager Ange Postecoglou: "It has been a big part of our way of doing things, we obviously want to be a team who dominates the game and scores goals.

"But at times over the last three or four months we have had to dig in. We had to do that again today, we've had two tough away games since the derby and we've taken six points from them.

"From our perspective that's a positive but the second half showed we still have things to improve on. Everyone was good in the first half but in the second we had to take control of it better.

"It's not an easy place to come and win - it was important to come here and continue our form. "

The focus turns to the Scottish Cup for both sides at the weekend. Aberdeen are away to fellow Scottish Premiership side Motherwell in the fifth round on Saturday. Celtic host Championship side Raith Rovers on Sunday.