Report and highlights as Arsenal laid down a marker in the race for fourth with a 3-1 win over Man Utd; Cristiano Ronaldo's 100th Premier League goal in vain as goals from Nuno Tavares, Bukayo Saka and Granit Xhaka seal victory; watch free highlights on the Sky Sports app and website

FREE TO WATCH: Highlights of Arsenal's win against Manchester United in the Premier League.

Cristiano Ronaldo scored his 100th Premier League goal but it was not enough to stop Arsenal moving into fourth thanks to a 3-1 victory over Manchester United at the Emirates Stadium.

Ronaldo, who was starting for the first time since the announcement of the death of his newborn son, scored his landmark goal in the 34th minute as he pulled a goal back for Man Utd after they fell behind following Nuno Tavares' early goal (3) and Bukayo Saka's penalty.

Despite trailing, United produced a vastly-improved performance from their 4-0 drubbing at the hands of Liverpool in midweek, and they were gifted a penalty of their own early in the second half after Tavares' inexplicable handball.

However, they failed to take advantage as Bruno Fernandes' spot-kick hit the outside of the post, and it proved a costly miss as Granit Xhaka produced a thunderbolt of a strike to secure what could be a crucial victory in Arsenal's bid to qualify for next season's Champions League.

Despite the win, Arsenal boss Mikel Arteta insists there will still be plenty of ups and downs in the battle to secure Champions League football. "I said this is going to be a rollercoaster," he said. "The winning and losing in this league is small margins. Today things went our way and we are really happy."

Victory sees the Gunners move into fourth spot in the Premier League and three points ahead of their north London rivals Tottenham, who travel to Brentford, live on Sky Sports from 5pm this evening (kick-off 5.30pm).

Meanwhile, defeat is a catastrophic blow to Ralf Rangnick's side's own hopes of securing Champions League football for next season. United, who announced the appointment of Erik ten Hag as manager for next season on Thursday, are now six points behind the fourth-placed Gunners, having played a game more, and Rangnick admitted after the game that his side's chances of Champions League football are all but gone.

When asked if Man Utd's top-four chances have gone, he said: "Pretty sure. For me even before the game it was not very likely but after today's result it is gone yes."

How Arsenal laid down a huge marker in the race for fourth...

Arsenal took the lead inside three minutes. Man Utd's defence were not allowed to settle as Raphael Varane and Diogo Dalot failed to clear a simple cross, allowing Saka a shot on goal. David de Gea did well to get a hand to the strike, but he could only turn the ball into the path of Tavares, who reacted first to tap in the rebound.

As was the case at Anfield on Tuesday evening, with seven minutes on the clock, supporters inside the Emirates Stadium stood to applaud in support of Ronaldo after the tragic news of the death of his newborn son.

Despite the early setback of Tavares' goal, United reacted well to going behind. They looked a real threat on the break and Dalot hit the crossbar with a long-range effort as Arsenal also struggled defensively.

However, Arsenal extended their advantage as Martin Odegaard picked out Saka, who was bundled to the ground inside the box before the ball fell loose to Eddie Nketiah, who ticked the ball home.

Man of the match: Granit Xhaka.

The Arsenal celebrations were initially cut short as the effort was ruled out for offside by VAR, but the cheers from the home fans were there again moments later as the technology took another look at the challenge on Saka by Alex Telles. Referee Craig Pawson was sent over to the pitchside monitor and eventually awarded the penalty to Arsenal, with Saka once again stepping up as he did at Chelsea on Wednesday night to slot home.

It was all going to plan for Arsenal, but United did remain a threat and they managed to pull a goal straight back as Ronaldo got in between Tavares and Gabriel to turn home a Nemanja Matic cross from close-range for his landmark goal.

The United pressure continued after the break and moments after the restart it was United's turn to be get a penalty. Tavares' outstretched arm clearly blocked the ball and Pawson pointed to the spot with VAR backing up the decision.

However, the opportunity was spurned as Fernandes saw his penalty hit the outside of Aaron Ramsdale's post and bounce away to safety.

Ronaldo then saw a goal ruled out for a marginal offside before Dalot's shot was tipped onto the post by the outstretched hand of Ramsdale as Arsenal somehow clung on.

In the end, United's spirited challenge was ended as Arsenal grabbed a crucial third goal. Mohamed Elneny teed up midfield partner Xhaka, who unleashed a left-footed thunderbolt from 25 yards to lift the roof off the Emirates Stadium and help his side lay down a huge marker in the race to finish in the top four.

On the race to finish in the Champions League: "I said this is going to be a rollercoaster. The winning and losing in this league is small margins. Today things went our way and we are really happy." 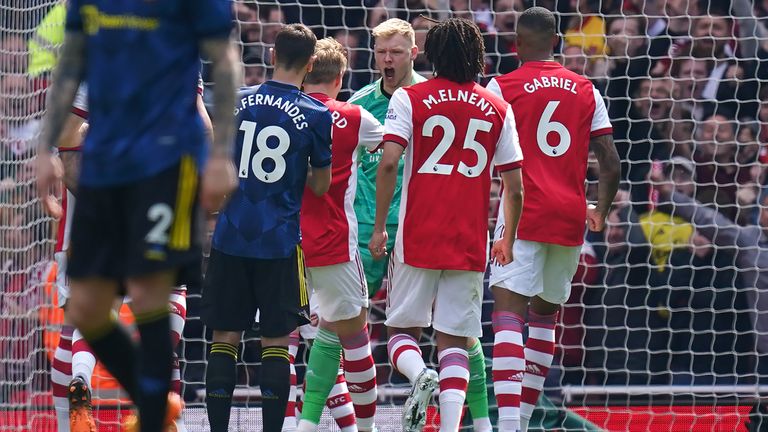 Man Utd interim boss Ralf Rangnick: "I think we showed an improved performance but in the end a disappointing result. I think we bounced back well from the early goal and had numerous chances in both halves to score more goals.

"I thought the weak part of our performance today was we didn't defend well inside and around our box. I felt there were three very unlucky VAR decisions. For me the Arsenal third was clearly offside. The second of Cristiano was not offside. We were not very happy with the VAR decisions today. An improved display but a disappointing result."

On Fernandes' missed penalty: "It would have helped us a lot if that had been the equaliser and probably would have changed the whole game. In the end, very unlucky for us."

When asked if Man Utd's top-four chances have gone, he added: "Pretty sure. For me even before the game it was not very likely but after today's result it is gone yes."

There's been plenty of change at Arsenal throughout Mikel Arteta's reign at the Emirates Stadium, but one constant has been Granit Xhaka.

Earlier this month, Xhaka admitted he was so close to leaving the club after clashing with the home fans during a 2-2 draw with Crystal Palace in 2019. "My bags were packed. The passports were out," Xhaka told The Players' Tribune. "I was done with Arsenal. Finished. There was a contract on the table from another club, and all I had to do was sign."

However, it was Arteta's arrival at the club months later and his intervention, which convinced Xhaka to stay, and two years later the Switzerland international is still just as important for the Spaniard.

Xhaka's name is not always up in lights, especially for wonder strikes, but against Man Utd the 29-year-old provided what could be a huge moment in Arsenal's season, and one that could propel them towards a top-four finish.

Arsenal were feeling the heat against Manchester United, who were piling the pressure on the Gunners' creaking backline as they went in search of an equaliser, but Xhaka stepped up just when the club needed him with a thunderbolt of a strike to seal what could prove to be a vital win in his side's season.

"I was dreaming of that because he deserves it," Arteta said about Xhaka. "If any fan would spend two minutes with Granit they would understand the person that he is and how much he loves the club. He opened up because he feels the environment is there to protect him. Thank you to the fans for that."

In Xhaka's interview, he also mentioned the fans, who, it is fair to say, he has had an up-and-down relationship with.

The goal is obviously one way to improve that relationship, and in the celebrations it was clear to what the strike meant to both the player and the fans. He blew a kiss to the stands and the love was reciprocated from the Arsenal fans.

A huge moment. I wouldn't write that story that Granit was going to score that goal. But he took the initiative and had the courage to play football.

Maybe, just maybe, everyone is starting come around to Arteta's way of thinking and realising just how important Xhaka is to this side. 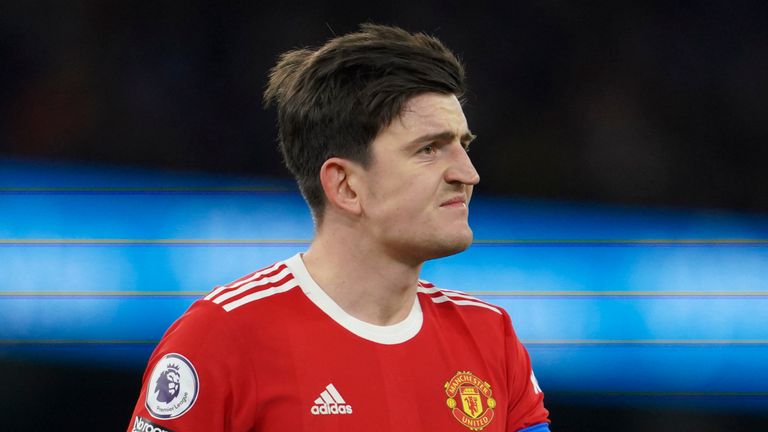 Paul Merson and Clinton Morrison believe Harry Maguire was left out of the Manchester United team against Arsenal because of footballing, rather than personal reasons

Manchester United have conceded 51 Premier League goals this season, only the second time they've shipped 50+ goals in a single campaign in the competition's history (54 in 2018-19).

United have lost four consecutive away league games for the first time since a run of six between December 1980 and March 1981.

Bruno Fernandes' effort was the fifth Premier League penalty Manchester United have failed to score against Arsenal, the most one team has missed against another in the competition's history.

Arsenal (37) have scored more Premier League goals via players aged 23 or under than any other side in the competition this season (exc. own-goals). 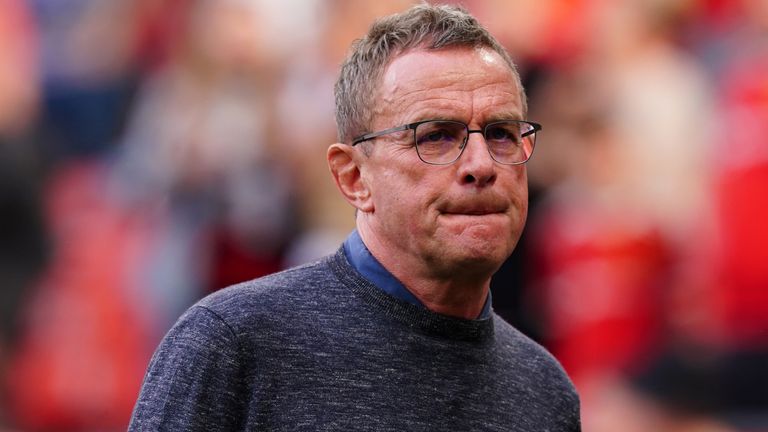 Up next for Manchester United is another game against London opposition as they face Chelsea at Old Trafford on Thursday, live on Sky Sports, kick-off 7.45pm.