England booked their place at Euro 2020 and celebrated their 1,000th international in style with a 7-0 thrashing of Montenegro at Wembley.

England booked their place at Euro 2020 and celebrated their 1,000th international in style with a 7-0 thrashing of Montenegro at Wembley.

Captain Harry Kane scored a first-half hat-trick - moving up to fifth in England's all-time scoring charts - and Alex Oxlade-Chamberlain and Marcus Rashford both found the net as the Three Lions raced into a five-goal lead in 37 scintillating minutes.

An unfortunate Aleksandar Sofranac own goal made it 6-0 in the second half before substitute Tammy Abraham opened his account in international football, confirming England's biggest home victory since October 1987.

The emphatic victory, which seals England passage to Euro 2020 as winners of Group A, was made all the sweeter by the fact the average age of Gareth Southgate's team was just 23 years and 255 days - the youngest ever in a World Cup or European Championships match.

How England cruised to Euro 2020

Gareth Southgate called on his England players to put on a show on a landmark night for English football, and his youthful side did not disappoint.

It took just 11 minutes for England to open their account, the returning Oxlade-Chamberlain unleashing a rasping drive into the bottom as he ended 18 months of injury hell with his first international since June 2017.

Having set up Oxlade-Chamberlain for the opener, Ben Chilwell became the first England defender in over a decade to provide three assists in a game, setting up Kane for two headers in six minutes as the Spurs striker drew level with Tom Finney, Nat Lofthouse and Alan Shearer on 30 England goals.

Jordan Pickford prevented Marko Simic from grabbing Montenegro a lifeline when he brilliantly clawed his header off on the line on 26 minutes.

Four minutes later, Rashford got in on the act, the Manchester United forward rifling a rebound into the bottom corner after goalkeeper Milan Mijatovic's stunning save at point-blank range thwarted a Harry Maguire header but diverted the ball into the path of his club team-mate.

With the floodgates well and truly open, Kane seized the chance to secure his hat-trick and write his name in the history books as he brilliantly brought Trent Alexander-Arnold's cross under control in the area before swivelling and picking out the bottom corner of the Montenegro goal.

It meant Kane became the first England player to score consecutive hat-tricks at Wembley following his treble against Bulgaria in September and saw him score a record 24th goal while wearing the captain's armband.

Pickford was called into action to deny Fatos Beciraj after he gave Maguire and John Stones the slip on 40 minutes, but England reached the interval in front and unscathed.

James Maddison came on for England debut alongside Abraham on 56 minutes and, after a subdued start to the second period, normal service resumed as Sofranac cannoned the ball into his own net off the crossbar.

Abraham continued his fine form in front of goal with England's seventh, converting Jadon Sancho's cross at the near post as all eyes turned to Euro 2020. 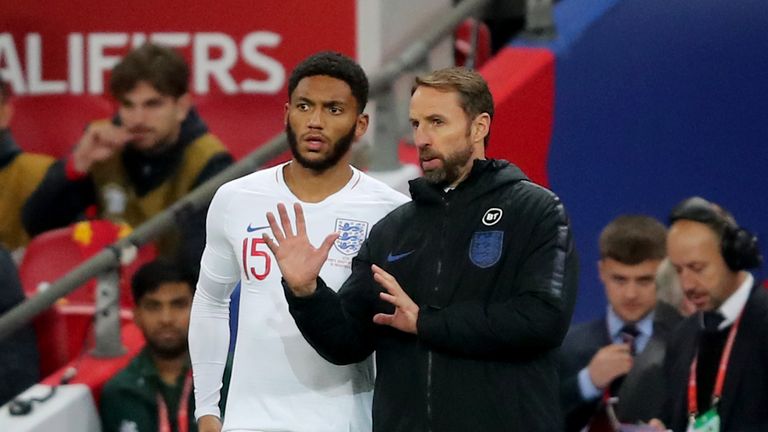 England manager Gareth Southgate says he 'doesn't understand' why Joe Gomez was booed by some home fans after the defender's row with Raheem Sterling earlier this week.

England manager Gareth Southgate told ITV: "Super quality passing and crossing and clinical finishing. In the past we have maybe struggled against lower-ranked teams who defend in numbers, but we have players who can open those teams up and a style of play that can do that. We have qualified top and done it clinically. We have to get both ends of the pitch right. We conceded a couple of chances we shouldn't. There is still work to do without the ball, but we are improving."

England conclude their European Qualifiers campaign away in Kosovo on Sunday at 5pm. Watch highlights from 15 minutes after full-time on the Sky Sports website, Sky Sports app and Sky Sports YouTube channel.