Follow England vs the USA with our live blog on skysports.com and the Sky Sports app; Kick-off at 8pm on Tuesday

England will be aiming to reach their first ever Women's World Cup final on Tuesday, but they must first beat current holders, the USA.

The Lionesses have reached two consecutive semi-finals at the tournament, but will be looking to go one better than 2015 and book their place in Sunday's showpiece final.

They beat Norway 3-0 in their quarter-final last week and would be the first England team to reach a major international final since 1966. The good news is that manager Phil Neville has a fully fit squad to choose from.

However, a very big task stands in their way. The USA are ranked number one in the world and are the reigning Women's World Cup champions, with an ominous 22 goals scored so far - although 13 of these came against Thailand in their historic opening game.

Jill Ellis' side were 2-1 winners against hosts France in their quarter-final, with the winner of Tuesday's game set to play either the Netherlands or Sweden in the Lyon final. The losers of both ties will play in Saturday's third-place play-off in Nice.

The race for the Golden Boot

Heading into the semi-final, it is a three-way tie for the Golden Boot and the trio are likely to feature on Tuesday. Alex Morgan, Megan Rapinoe and Ellen White have all scored five times in France, with two games to play.

Neville not worried about USA

England Women manager Neville is not worried about the threat defending champions USA may pose ahead of their World Cup semi-final. 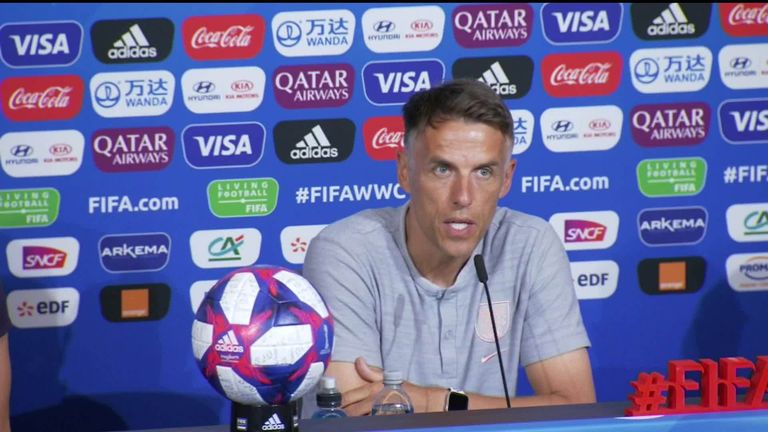 "We concentrate a lot on what we can do and how we can try to win a game. Our strengths, our values and our style of play and the way we want to play is the most important thing.

"We want to play a certain style in a World Cup semi-final - with the freedom and expression we have had the past five games."

England's record goalscorer Kelly Smith says Tuesday's semi-final will be decided by 'fine margins' and despite wanting an England win, believes the USA will edge the contest.

She told the Women's World Cup podcast: "It is fine margins at this stage. I think both teams have a lot of respect for each other. I don't think USA have had that in the past with England but things have evolved with the SheBelieves Cup and England's experiences of playing elite games. England don't fear the US any more and I think that will be massive for them on the night. 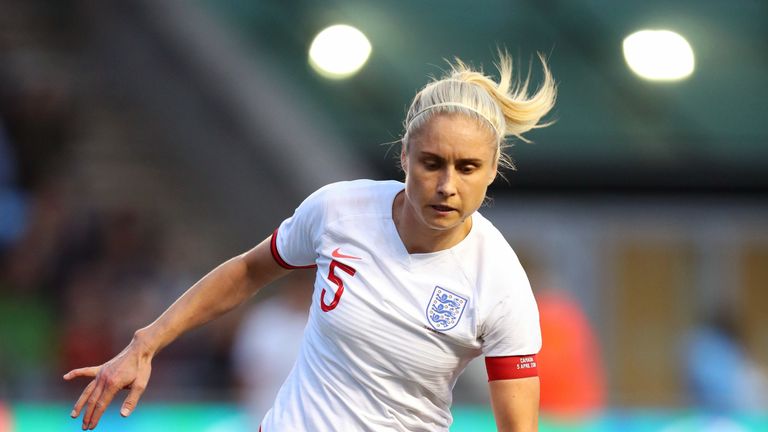 "I think the US have a slight edge with the experience that they have. My heart wants to say England but my head thinks that the US are just too strong on all fronts with the depth that they have coming off the bench. I don't want them to win it but I think they will just edge it.

"It would change the face of women's football in this country if they could come back with that trophy. It would be the ultimate. So many people's perceptions have been changed. It seems that the whole country is very supportive of the Lionesses. We have never really had that feeling before."

The Key Battle: Bronze vs Rapinoe

The stars of their respective quarter-finals, Lucy Bronze and Megan Rapinoe will go head-to-head in Lyon as the England defender looks to keep the USA co-captain from adding to her five goals already in the tournament.

The current Women's World Cup holders have beaten Spain and France 2-1 in their knockout games so far and it is Rapinoe - who felt the wrath of President Donald Trump last week - who scored all four USA goals.

But she will arguably face a different prospect in Bronze, who Neville has tipped for the Ballon d'Or. The defender was key to England's progression in the quarter-finals and topped her performance off with a sensational goal.

Speaking about the duel, Neville said: "If you look at the left-hand side of the USA and the right-hand side of England, I don't think you'll get a better left and right in women's football. Megan is someone from day one that I have really admired. I like her individuality, on and off the pitch. She is world class."

It will be an enthralling encounter between these two extraordinary talents and their battle will be vital in deciding the eventual finalists. 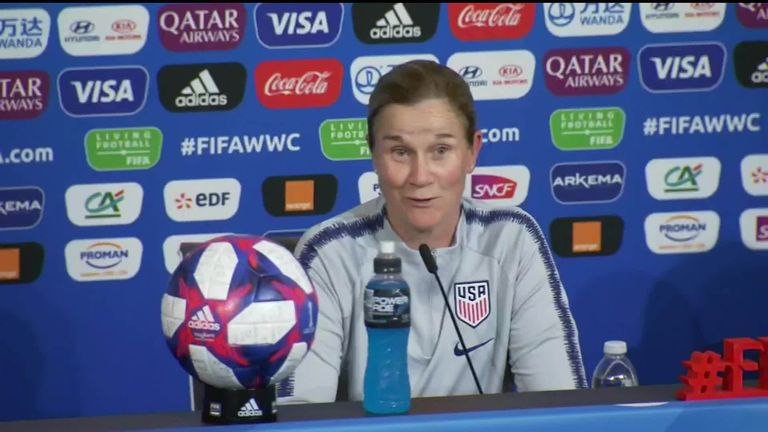 USA Women manager Ellis was born in Portsmouth and lived in England until the age of 15 before moving to Virginia.

She identifies her nationality as American and there have been plenty of questions about facing her home country in the semi-finals, but Ellis will not let her British connections play a part.

"I'm an American except when I'm in the supermarket or at the candy store," she told a press conference.

"I grew up playing with boys in the schoolyard and my brother in the backyard. I had zero opportunity to play over here [in Europe] so that is what America gave me, an environment to put on my first team uniform in terms of soccer. I always loved sport, so it gave me a vehicle to experience it even more.

England vs USA in numbers

"I have a lot of fond memories of my life in England. I was a Pompey lass - I can't say I supported Pompey all the time. I have been a Man United lass since I was seven. But so many fond memories, great people, I spent many a summer in Edinburgh so my whole British culture growing up is still with me for sure.

"I am very grateful for that, because if I had grown up in another country, I am not sure I would have the passion for football that I have. What America gave me was kind of a dream and the opportunity and ability to follow that path, which I really had never dreamed about. I just feel very fortunate to be here."

Will 'spy gate' have an effect? 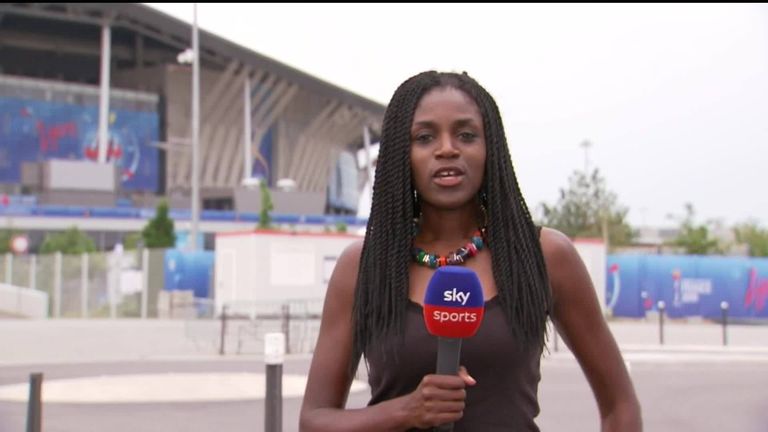 There has been a touch of drama ahead of Tuesday's big game, with members of the USA's backroom staff caught in the private areas of England's team hotel over the weekend.

It is reported that none of the delegates were wearing official identification as they looked to scout out the Fourviere Hotel for the USA team, who could move there ahead of the final should they beat England. 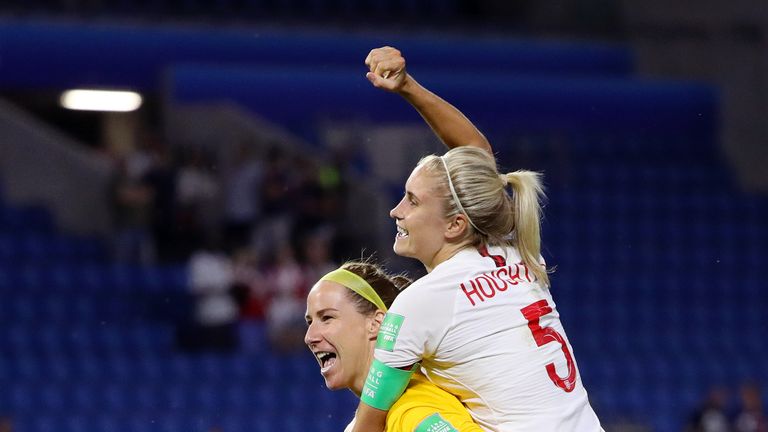 The Lionesses were training away from the hotel and no sensitive information was left lying around, with the incident appearing to be a psychological play rather than tactical.

Speaking about the incident, Neville said: "It's not a concern, but it's not something I would want my team's operations doing. England would not do it. I am happy with our hotel and we were out training. I hope they enjoyed our hotel. It is not something we would do, send somebody round, but it is their problem.

"It'll have no bearing on the game, to be honest I found it funny. I thought 'What are they doing?'. It is not the correct etiquette, that's not something I would allow from our organisation."

Tuesday's semi-final will be the second time England and the USA have played each other this year, having met in March during the SheBelieves Cup.

It was an entertaining 2-2 draw in Nashville, Tennessee, with Rapinoe's 33rd-minute opener quickly cancelled out by England captain Steph Houghton.

Nikita Parris then put England ahead seven minutes after the break, but Tobin Heath equalised 15 minutes later to see the points shared. England went on to lift the trophy after winning their other two games, while the USA lost their title as they finished as runners-up.