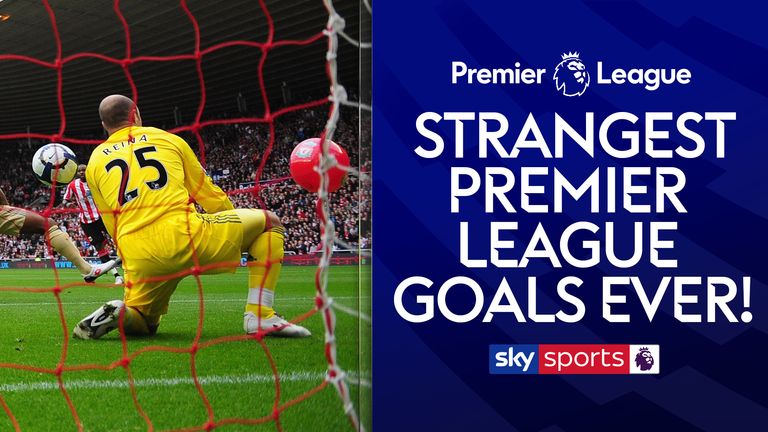 Ten years on from Darren Bent's 'beach ball' goal against Liverpool, we look at some other weird goals that have been scored in the Premier League

Darren Bent scored one of the most bizarre goals in the history of football 10 years ago this Thursday - with the help of a beach ball.

But how did his memorable strike for Sunderland against Liverpool come about? And what were the reactions of the players, managers and referee involved?

With the help of Bent, we look back at his infamous goal…

When Rafa Benitez took his Liverpool team to the Stadium of Light in October 2009, the Spaniard was desperate for a positive result. In their first eight games of the season, Liverpool had lost three times, beaten at Tottenham and Chelsea and at home to Aston Villa.

Their opposition had made an inconsistent start to the campaign of their own, also losing three of their opening Premier League fixtures but had pulled off four wins and a draw at Old Trafford in their previous outing prior to the international break.

Sunderland's main threat was Darren Bent. The striker, signed from Tottenham for £16.5m in the summer transfer window, was on fire. He'd scored seven times in eight games. And he'd make it eight in nine against Liverpool - in memorable fashion.

Steve Bruce's Sunderland came flying out of the blocks. Andy Reid flashed a shot wide inside two minutes and with five minutes on the clock they were 1-0 up - assisted by a Liverpool-branded beach ball, which had been thrown onto the pitch by an away fan and blown by the wind into the Reds' penalty area.

"Andy Reid got down the line on the right. He had a wand of a left foot - but as it was on his right foot, and I knew he'd cut it back and get it into a good area," Bent told Sky Sports.

"All the defenders ran into the six-yard box but I pulled out a little bit. I remember it coming across the box and as it bounced up and was on its way to me, I was thinking to myself, 'hit the target. Hit the target'.

"I didn't connect with it that well but I knew it was going on target… Then it hit the beach ball and went in! But I didn't think anything of it. I didn't think 'oh my god, look what's just happened,' I just thought 'it's a goal!' and ran off."

As Bent's team-mates dashed to celebrate with him, Benitez's men couldn't believe what had happened - or that the goal was allowed to stand.

"I've seen the goal played back I don't know how many times now and you look at the reactions on different peoples' faces," said Bent. "Pepe Reina's face, Glen Johnson's face, Jamie Carragher's face… everyone is like 'what's happened here?!'"

The referee that day was Mike Jones and presuming the ball had gone in off another player in the box, awarded the goal.

As the Liverpool players complained, the official realised something was amiss. And at half-time, Bent confirmed to him that he had made a huge error that would be spoken about for years to come.

He should have stopped play and given a drop ball, due to outside interference in the game. But without VAR to rescue him and with his assistant also none the wiser, the mistake - and the goal - stood.

"I remember the referee's face at half-time when he came to see me," said Bent. "He said 'did it hit the ball?'. When I said, 'Yeah', there was panic in his face. He realised he'd made a bit of a mistake!

Bent laughs at the memory, and after the match his manager Bruce, could smile too.

"I thought it was a deflection off a player," he said. "It's got Liverpool crests all over it. What a shame."

Jones was demoted to the Championship the following week and castigated in the press. Former Premier League referee Jeff Winter told the Telegraph: "I'm absolutely amazed that for a referee at that level of football, that between him, his assistant and the fourth official they didn't see what had happened and give the correct decision."

As for Benitez, he was more concerned by Liverpool's performance after the incident. "It was bad luck with the goal - but the team were not doing well," he said afterwards. Perhaps shocked by the early setback, Liverpool never recovered - and were fortunate not to lose by more.

"It was probably one of the best games we played that year," said Bent. "We had chance after chance - and it's just funny that the one goal we did get was off that beach ball.

"We played really well that day and should have beaten them by five. We hit the post, we created chances, we passed them off the pitch. But the beach ball shot was the one that went in."

The win moved Sunderland above Liverpool into seventh but while Bent went on to score 24 Premier League goals, the best return of his career, Sunderland won just once more in the league until March and ended up down in 13th.

Liverpool eventually took that seventh spot but, after finishing 23 points behind champions Chelsea and losing in the semi-finals of the Europa League, Benitez left the club at the end of the season.

It's a weird bit of history that I'm proud to be a part of.

As for the beach ball? That now resides at the National Football Museum in Manchester.

With the introduction of VAR, current Premier League refs are unlikely to be caught out like Jones.

"It was a freak accident but it was a nice goal to score," said Bent. "I finished with 106 Premier League goals - although some people say 105! But it's a weird bit of history that I'm proud to be a part of."