Team news and stats ahead of RB Leipzig vs Man Utd in the Champions League group stage on Tuesday (kick-off 8pm).

United boss Ole Gunnar Solskjaer has confirmed the forward pair are both struggling with "minor niggles" and will not travel to Germany for the final game in Group H.

Having missed United's 3-1 win over West Ham on Saturday, goalkeeper David de Gea is available again, as is defender Luke Shaw, who has not featured since the win over Everton a month ago. 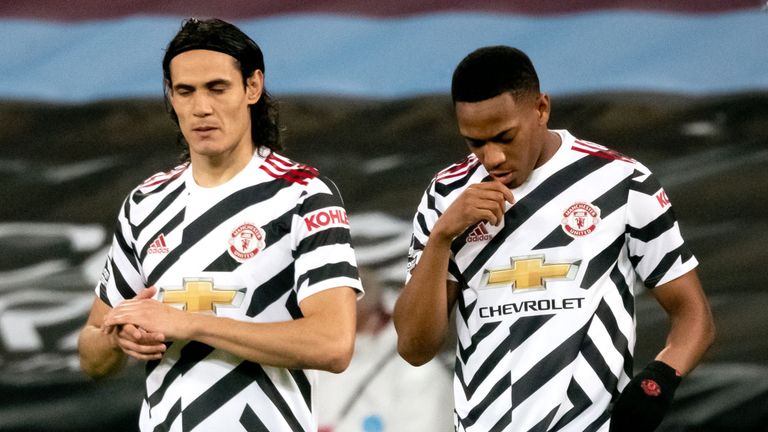 RB Leipzig will be without Konrad Laimer, Lukas Klostermann and Benjamin Henrichs through injury on Tuesday, while head coach Julian Nagelsmann has confirmed teenager Lazar Samardzic has tested positive for Covid-19. Manchester United need a point in Germany to qualify, and would finish top of their group if PSG also fail to beat Istanbul Basaksehir.

RB Leipzig need to beat Manchester United to guarantee their qualification, but can go through with a point if Basaksehir beat PSG.

Arsenal's derby defeat means they sit 11 points behind Tottenham with just over a quarter of the season gone. Has the gulf in north London ever been this large?

Jasper Taylor is joined by Dharmesh Sheth and Gerard Brand to discuss Spurs' continued fine form, as well as assessing Arsenal's lack of creativity as we ask: was Mikel Arteta expecting the Gunners to sign Houssem Aouar in the summer? And did he oust Mesut Ozil too early?

Sky Sports' digital journalist Oliver Yew also joins the show to give his first-hand experience of fans returning to stadiums, and Kaveh Solhekol is on the Regional Review to talk all things West Ham.

And in part four, we discuss Sheffield United's woes as they prop up the table following the worst start by any club to a Premier League campaign.