Ruslan Malinovsky: Ukraine midfielder insists 'pressure is on England' ahead of Euro 2020 quarter-final in Rome

Ruslan Malinovsky believes Ukraine have what it takes to beat favourites England and will relish the underdog tag; England face Ukraine in Rome on Saturday evening for a place in the last-four; Malinovsky: "The pressure is on England not us, we can use this."

Ruslan Malinovsky says the pressure will be on England when they face Ukraine in their Euro 2020 quarter-final in Rome on Saturday.

Andriy Shevchenko's side secured a dramatic late extra-time winner over Sweden in the last-16, while England will come into the match off the back of a first tournament win over Germany since 1966.

However, midfielder Malinovsky believes Ukraine will relish the underdog tag and can capitalise on any nerves England might have heading into the game.

"The pressure is on England not us, we can use this," Malinovsky said. "We've learned from the Sweden game and grow more confident.

"The game against England is one in which we must not make any mistakes. But we have shown in the games where we were the underdog that this inspires us to play better.

"The second half versus the Netherlands and Sweden of course. We enjoy not being the favourite."

Gareth Southgate has already warned England will have to be wary of Ukraine's threats and avoid getting sucked into the temptation to look beyond Saturday's game. 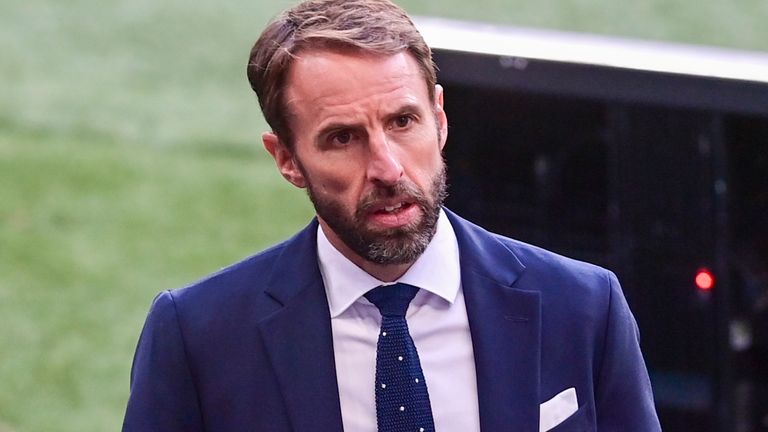 Gareth Southgate has warned England against being complacent when they play Ukraine on Saturday. For full podcast click here

Malinovsky praised England's quality but the 28-year-old believes his side have what it takes to upset the odds and can take advantage of the fact the match will be played on neutral territory.

"They're a great team full of stars, Harry Kane of course but Sterling is the one we've identified. He is the top scorer for the team and is quality," Malinovsky added.

"We know how good all the team is, but that is a great motivation for us. We will have to be solid and keep the game tight.

"Its all about taking your moment when it comes along. Every game is a final now. And every game is decided by moments.

"It will be difficult for England playing a game away from Wembley. They've had this advantage throughout the tournament and now it is gone.

"They won't have the fans and the support that they have had and this could be an another advantage for us.

"We understand that the expectation is for England to win but remember this tournament has been one of surprises and we believe we can cause another one on Saturday."

'There is no pressure on Ukraine' Ukraine can go into their quarter-final against England without the weight of expectation and knowing they have already lived up to expectations in getting to the last eight, according to Ukrainian football expert Andrew Todos.

After knocking out Sweden on Tuesday, Ukraine will now relish the chance of beating England and causing the next upset at Euro 2020.

"A lot of emotions, a lot of energy was spent in that extra-time period, but now that Ukraine have got a bit of momentum after their poor performance against Austria, they bounced back with a win against Sweden and are looking forward to a non-pressure match against England," Todos said.

"They are the underdogs. They have exceeded or met expectations and are looking forward to making potentially a bit more history."