England vs Germany. European Championships Round of 16.

Match report as England end long wait for a major win over Germany at Wembley and book their place in the last eight of the European Championship, where they will meet Sweden or Ukraine

After 55 years of hurt, England finally beat Germany in a knockout game again, with Raheem Sterling - their Euro 2020 hero - and Harry Kane sending them into the quarter-finals with a 2-0 win over their great rivals.

Sterling scored both England goals in the group phase and began and finished their slick second-half move to light up a previously tense, stodgy game and send the majority of the 45,000 fans inside Wembley wild with delight.

Thomas Muller had a wonderful chance to level it up but when he shot wide, Kane put England in full control, shrugging off a difficult campaign so far, and a first half in which he was starved of the ball, to head in Jack Grealish's cross.

Germany had gone seven games unbeaten at Wembley, not losing a competitive fixture at England's national stadium since the 1966 World Cup final, but Gareth Southgate's new generation of players made history of their own on Tuesday evening.

It was redemption for the manager, too, with Southgate striking a blow against the side he missed the vital penalty against at Euro 96. His focus will now be on claiming the title, which England came so close to 25 years ago.

Their next step on that journey will be in Rome against Ukraine - and after recording a victory which will be remembered for years to come, they will go to Italy full of belief.

How England made history...

With an increased attendance of 45,000 supporters, the atmosphere was electric at kick-off but it was visitors Germany who were quickest to settle, with Declan Rice forced into a desperate foul on Leon Goretzka after the midfielder broke through England's back three and raced towards goal.

Kai Havertz blasted that free-kick into England's wall and the hosts eventually began to find a foothold, with Sterling testing Manuel Neuer from distance with his side's first shot on 16 minutes.

The effort galvanised his team-mates and England, with Bukayo Saka leading the charge, won a series of free-kicks around the Germany box before Harry Maguire headed over Kieran Trippier's cross from the right.

Despite the formation change, England were still struggling to find a way through to captain Kane, who had just two touches in the opening half an hour. At the other end, Timo Werner's runs were looking more threatening, with the Chelsea striker denied from close range by Jordan Pickford.

Kane eventually got on the ball in space in midfield five minutes before the break but his pass for Kalvin Phillips was overhit, with the Leeds man breaking through space in the German defence, before a Mats Hummels clearance prevented the skipper from latching onto a Trippier free-kick in the box himself.

Hummels was there again on the stroke of half-time, pouncing on Kane's poor touch after Sterling's surging run to snuff out a good chance.

Germany were immediately on the front foot after the break - and Havertz drew a sublime stop from Pickford to keep the scores level. The forward lashed a left-foot rocket at goal from the edge of the box but the England goalkeeper's reactions were like lightning and he pushed the ball over the bar.

Again it was Sterling who tried to get England into gear, sitting down Goretzka before dribbling into a crowd of defenders in the German box, before again running into traffic after a quick one-two with Kane as both teams began to get bogged down in midfield.

Changes were needed and moments after his appearance on the big screen was cheered by England supporters inside Wembley, Grealish was sent on by Southgate, with Germany turning to Serge Gnabry.

Eight minutes later England were ahead.

Sterling was the instigator and goalscorer, driving at the Germany defence before finding Kane, who shuttled it on to Grealish. The Villa man fed Luke Shaw and his low cross into the six-yard box was tapped home in trademark fashion by Sterling.

It was England's first shot for 48 minutes and Wembley erupted.

Then came a pivotal moment. Havertz played in Muller but the Bayern Munich legend sent his shot inches wide of Pickford's post with the goalkeeper beaten. The German players were dejected. The England supporters elated.

Again Grealish was involved but it was a moment of pure joy for Kane, who has suffered and struggled through this tournament.

The England captain was perfectly placed to head home Grealish's pass after Shaw had won the ball back in midfield and exposed the German defence.

For Germany boss Joachim Low it was his final match in charge of the national team. For Southgate it was a hero's round of applause as he walked down the tunnel to prepare for Saturday.

England boss Gareth Southgate: "The players were immense, right the way through the team. The energy was incredible in the stadium. For those people, after such a difficult year at home, to have that enjoyment we've given them today was very special.

"It didn't need me to say it but when we got in the dressing room we were talking about Saturday already. Today's been an immense performance but at a cost emotionally and physically, we need to make sure we recover well.

"It's a dangerous moment for us. We have the feeling round the country that we only have to turn up to win the thing, but it's going to be an immense challenge from here on. The players feet are on the ground, they should feel confident from the way they've played, but we came here with an intention and we've not achieved that yet." 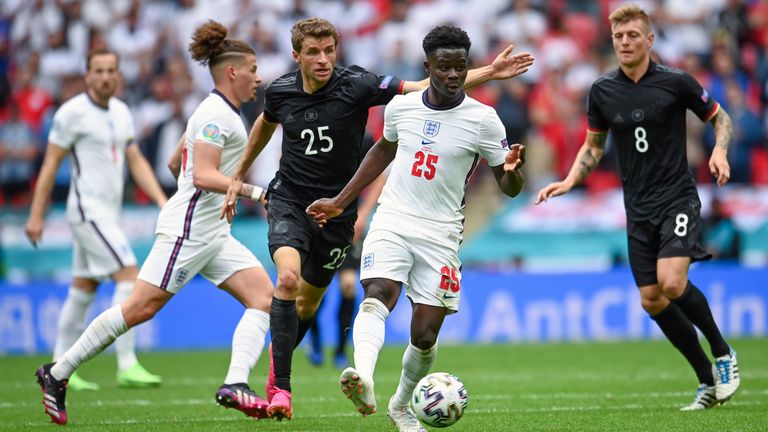 Germany boss Joachim Low: "The quality is there but at the knockout stage every mistake can be fatal, decisive. What we lack is a little bit of experience in certain situations, and in all the matches we've played, we had certain spells when we weren't effective or clinical enough.

"The players have a good attitude, good personality, they worked hard, they wanted to make it far but there were spells in each of our matches when we couldn't impose our game. So then it can happen that you are punished and eliminated.

"In these 15 years there were a lot of positive things. We won the World Cup in 2014 as the highlight, then the Confederations Cup with with a young team. There were other spells and moments. There are very strong bonds that have been made and connected.

"Since 2018 we've had a few problems, difficult phases and in the end we haven't made it happen. The disappointment is there and will stay for a while, you don't forget about it after a couple of days. I will need some time but I'm sure there are a lot of positive things I can take out of the last 15 years."

England will play Sweden or Ukraine in the quarter-finals of Euro 2020 in Rome on Saturday at 8pm.