Where will Jack Grealish play at Man City? Will he replace Raheem Sterling or Phil Foden? What will he provide and how does the 25-year-old stack up against Kevin De Bruyne? We chart the meteoric rise of the British transfer record during the Premier League era

The arrival of Grealish has placed greater pressure on Sterling and Foden for a starting berth, with all three players preferring the wide-left channel, while Gundogan typically plays deeper on the left of a three-man midfield.

However, Sterling can also cover up top and with Sergio Aguero's departure - and with any deal for Harry Kane uncertain - City could well deploy false No 9s, with Gabriel Jesus and Sterling prime candidates.

Meanwhile, Grealish can be used in a No 10 role, as can De Bruyne - so there could be room to accommodate all nine attacking players with positional fluidity and rotation to help navigate multiple competitions. 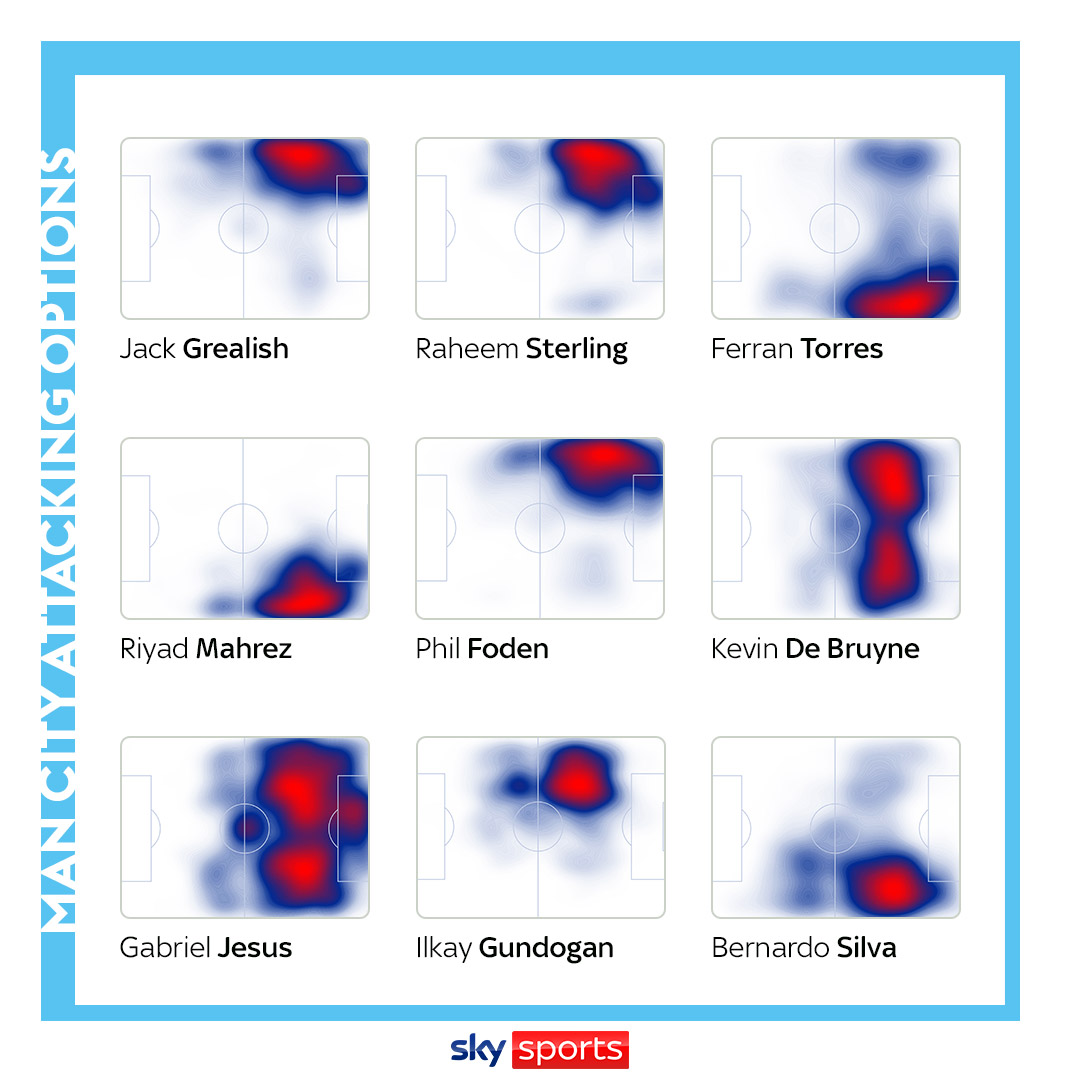 So where could Grealish fit in?

Grealish was deployed on the left of Aston Villa's front three throughout last season - operating in much the same position favoured by Sterling. With Foden also spending time out on the left it would be no surprise to see Grealish used deeper at City.

Those inside positions - what became known as Guardiola's 'twin eights' - would seem a good fit for a player happy to take his time on the ball, dragging opponents out of position and waiting for the opening. There will be a lot of that against packed defences at City.

It is a zone in which Gundogan enjoyed plenty of success last season and Grealish could no doubt learn from the German's off-the-ball movement. Gundogan is versatile enough to feature in three other positions himself so perhaps Grealish could displace him there.

It is easy to envisage Grealish and De Bruyne in those advanced midfield positions against weaker opposition as City pile players forward. But do not rule out De Bruyne being used as a false nine as part of the front three with Grealish taking on creative responsibility.

Ultimately, rotation is going to be a feature given the talent available and Grealish can expect to take on a number of different roles in this City side. Is he in the first XI? As the Champions League final showed, it is a moot point. Nobody can second guess Guardiola.

How will Grealish improve City?

Indeed, a high line compresses the opposition into a tighter area, which inevitably demands players to work in tighter spaces and evade the press. Who is better at doing this than Grealish?

The graphic below plots every instance where opponents applied pressure on Grealish from behind last season and the outcome, revealing how the burgeoning talent almost always evaded challenges and produced a successful outcome. 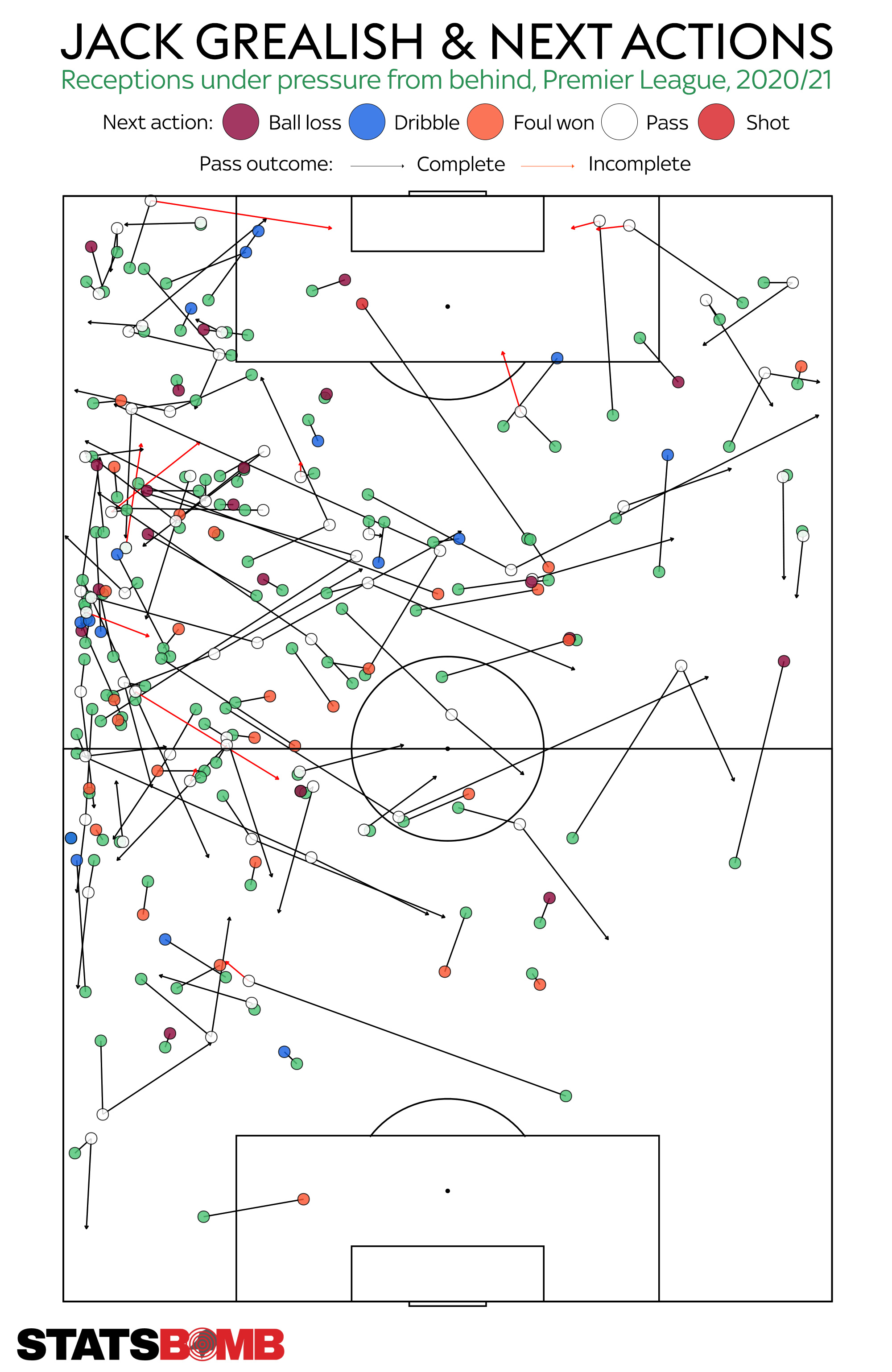 But Grealish also excels at the gritty side of the game: winning duels across the pitch and recovering possession in the final third - ranking sixth and ninth per 90 minutes in the Premier League last season, respectively.

The 'fouls won' statistic appears to have risen to prominence in tandem with Grealish and there is little surprise - his close control drew a league-high 110 fouls last term, 22 more than any other player - a staggering statistic when you consider he missed a third of the season through injury.

Grealish also belongs to an elite class for creating goals: only De Bruyne registered a superior ratio for assists per 90 minutes last season.

Yes, if City sign Grealish they would have the league's top two creators in their ranks - a potent statement of intent for their title defence.

The British transfer fee has soared during the Premier League era since Manchester United paved the way by signing Andy Cole from Newcastle for £7m in 1995. Dennis Bergkamp and Stan Collymore edged that fee higher that same year before Newcastle splashed £15m on Alan Shearer in 1996.

That fee stood for five years until Manchester United signed Juan Sebastian Veron for £28.1m and surpassed that outlay the following year by signing Rio Ferdinand from Leeds for £29.1m.

The record crept higher after the arrivals of Andriy Shevchenko and Robinho over the following years, but the exponential leap occurred in 2016 when Manchester United shelled out £93.25m on Paul Pogba - a record that stood for five years.

City have set a new benchmark with their £100m acquisition of Grealish and could still send that figure to new highs if the club is successful in their pursuit of Harry Kane. Meanwhile, Chelsea are also in negotiations to resign Romelu Lukaku from Inter Milan for around £100m.