Raheem Sterling admitted earlier this week he is open to leaving Manchester City for move abroad after starting just two Premier League games this season; City manager Pep Guardiola says his players "have to speak on the grass, on the pitch" 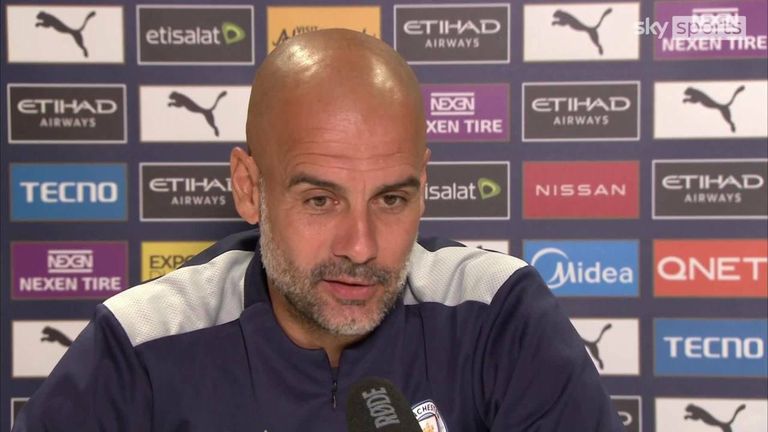 Pep Guardiola says his Manchester City players have to "speak on the pitch" when asked about Raheem Sterling considering leaving the club.

Sterling admitted this week he would consider leaving City and moving abroad, saying: "If I want my happiness at a certain level I need to be playing football. I need to be scoring goals and enjoying myself."

The 26-year-old has struggled to hold down a regular place in Guardiola's side this calendar year, and has started just twice in this season's Premier League.

When asked for his view on Sterling's comments, Guardiola said: "I didn’t know [about] it, and I think the club didn’t either.

"Raheem is our player and hopefully will be an important player for us. He wants more game time - like Riyad [Mahrez] when he doesn’t play, they complain, when Joao [Cancelo] doesn’t play, [he] complains. Some players, they complain when they want to play all the time.

"But I cannot assure how many minutes every player is going to play. Always they have to speak on the grass, on the pitch. That is the best moment.

"Not just Raheem - all of them. They know they are going to play minutes. I’m not a guy who only plays 11 players and that’s all. All of them are involved.

"If this is not the case, they are free to take the decision that is best for them - for the players, and their families. This is the most important thing.

"It’s not just Raheem but all of them want to play every game, 90 minutes but I cannot give them that. I cannot assure them. They have to prove every training session on the pitch and try to be happy there."

Guardiola has promised Sterling he will get plenty of opportunities to prove why he should be starting every match.

The forward is under contract at the Etihad Stadium until the end of next season, and Guardiola feels there are no issues over the comments Sterling made which have fuelled speculation about his future.

The City boss added: "He has all the skills to play in any of the three positions up front. He is so dynamic, he has the sense to arrive at the box and of course he scores goals - sometimes it's the confidence.

"He is an exceptional player. He is in the national team. What a Euros he had! There are no doubts about that. He is playing with the top, top players as well.

"Sometimes I decide for the other ones but the moment I don't play Phil [Foden] the press say, 'oh Phil deserves to play'. When Jack [Grealish] doesn't play, 'You have to play Jack'.

"Riyad [Mahrez] was the best player in the league in the last four or five months, every game he played. He was in exceptional form.

"But it's in the past. I don't care. People judge me on what is going to happen tomorrow.

"It's today, tomorrow, when you get the opportunity to play. Show me, show yourselves. Show the world how wrong I was when I was not selecting you and then you are right.

"We are in the free world and the players can speak and talk wherever they want, what they want. So from this [Sterling's comments], zero problems.

"What I want as a manager is to pull out, take out the best from Raheem every single time when he plays. This is what I want."

City face Burnley on Saturday before a Champions League away tie at Club Brugge on Tuesday.

After City confirmed yesterday that Ferran Torres suffered a fractured foot while away on international duty with Spain, Guardiola said the forward could be out for up to three months with the metatarsal injury.

Guardiola also said Brazil duo Ederson and Gabriel Jesus will miss the Premier League match after playing in a 4-1 win over Uruguay last night and admitted he is not sure whether or not they will rejoin the squad by Tuesday's match.

Speaking at the FT Business of Sport US summit, Sterling revealed he would consider leaving Manchester City and moving abroad.

"If there was an opportunity to go somewhere else, (for more game time), I would be open to it at this moment in time," he said.

"As an English player, all I know is the Premier League and I have always had something down (in me) that maybe one day I would love to play abroad to see how I would come up against that challenge.

"If I want my happiness at a certain level, I need to be playing football. I need to be scoring goals and enjoying myself."