Roberto Martinez coached Everton between 2013 and 2016; 48-year-old is currently Belgium manager and the FA are unlikely to let him leave before the 2022 World Cup; Everton sacked Rafael Benitez on Sunday with club 16th in table and are also considering Wayne Rooney as his replacement

Roberto Martinez would welcome a return to Everton as they search for a replacement for Rafael Benitez, who was sacked as the club's manager on Sunday.

Martinez, who spent three years at Goodison Park between 2013 and 2016, is high on Everton's shortlist.

However, the Belgian FA wants Martinez to stay on as manager and lead them into the 2022 World Cup, and any return to the Premier League side would be unlikely to happen before this winter's tournament.

Martinez was the Everton board's No 1 choice to replace Carlo Ancelotti - who moved to Real Madrid - this summer, but Farhad Moshiri, the club's owner, opted for Benitez.

The 48-year-old is understood to feel a huge affinity to Everton following his time at the club. He led them to fifth in his first season but was sacked in May 2016 after two successive 11th-place finishes.

Benitez left Everton after just six-and-a-half months in charge following Saturday's 2-1 defeat at Norwich, and the club have since confirmed the departures of Francisco de Miguel Moreno, Antonio Gomez, Jamie Harley and Cristian Fernandez from the first-team technical staff.

The Toffees have won just once in the Premier League since September and are 16th in the table, six points above the relegation zone.

As well as Martinez, Wayne Rooney is being considered as a candidate to replace Benitez. The former England captain has impressed in his first managerial job at Derby under extremely difficult circumstances.

Rooney came through Everton's academy and made his debut in August 2002 before joining Manchester United two years later. He also spent the 2017/18 season at Goodison Park after returning from Old Trafford.

The 36-year-old is understood to be happy and focused at Derby but would find it difficult to turn Everton down considering his history and association with the club. 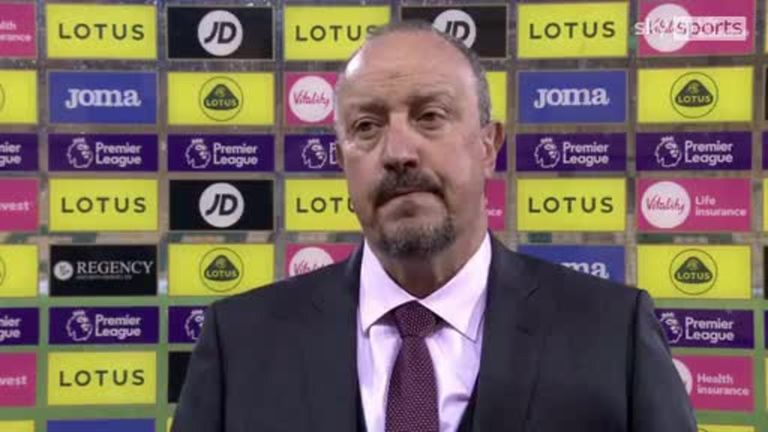 Speaking after the defeat at Norwich, Benitez was still confident he could turn Everton's season around, despite the protests from fans

Frank Lampard is another manager being looked at by Everton, as is assistant manager Duncan Ferguson, Brighton's Graham Potter and ex-Lyon boss Rudi Garcia.

Both Lampard and Garcia are currently out of work, while Ferguson - like Rooney - has a storied history with Everton.

Potter is understood to be very happy at Brighton and is not currently interested in talking to Everton.

Following his sacking, Benitez released a statement on Sunday night claiming things "would have been better" if players had not been injured and further new signings had been made.

He said on his personal website: "We knew it wouldn't be easy and that it was a big challenge, both emotionally and in terms of sport.

"My love for this city, for Merseyside and its people, made me accept this challenge, but it is only when you are inside that you realise the magnitude of the task.

"From the very first day, my staff and myself worked as we always do, with commitment and full dedication. We didn't only have to get results but we also had to win over people's hearts.

"However, the financial situation and then the injuries that followed made things even harder. I am convinced that we would have been better once the injured players were back and with the arrival of the new signings.

"The road to success isn't easy and sadly nowadays in football there is a search for immediate results and there is always less and less patience. Unfortunately, circumstances have determined the results and it won't be possible to continue this project.

"In any case, thank you to the board, to the staff, to the players and to those fans who have supported us during this time."

The former Liverpool manager was appointed Everton boss last summer but the Spaniard failed to win over the Goodison Park faithful.

Everton fans displayed a banner calling for his exit during their team's loss to Norwich at Carrow Road. The same banner was also unfurled at their 3-2 FA Cup third-round win at Hull.

"An update on a permanent replacement will be made in due course," Everton said.

"Every time I see Everton over the past few months it doesn't look like a good dressing room there. They've got some decent players who turn up every now and again, which is no good for a big club like Everton.

"I get the impression that something is missing in that dressing room, whether that be the culture or the lack of characters and leaders at the club. 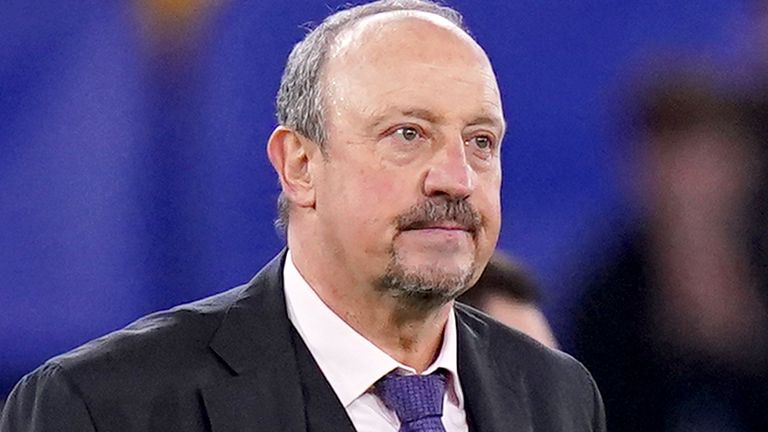 "I'm convinced he did it again there and I didn't see him lasting. Some people won't like that fact we've talked about a manager's position but his departure has felt inevitable.

"He was never the right fit. You can't keep losing matches. The fans didn't have him. Football fans don't mind who is in charge if they're winning, but he had to go. 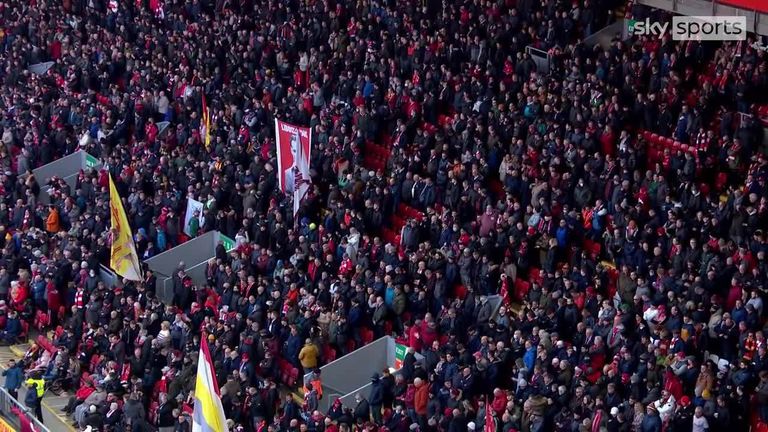 Following the news of Rafael Benitez's sacking at Everton, Liverpool fans sang his name during half-time of their game against Brentford at Anfield on Sunday

Stubbs: I wouldn't be looking at Martinez

"He's not for me. I've got to be honest. I think Roberto when he got the job, he was lucky that he inherited the defensive side of David Moyes that was still in the team. "Over the years, it gradually got worse and worse and by the time he left, watching Everton was a real difficult watch - it was slow, it was boring at times, it was a lot of sideways, it was a tough watch.

"For me, it's not a candidate that I would certainly be looking for."

It is a question that remains hard to pinpoint, but for many of those who headed back to Merseyside from Norwich having made their longest away trip of the season, it was clear where the buck stops. Everton are in freefall and this unhappy marriage with under-fire former Liverpool manager Benitez reached its nadir at Carrow Road.

This was the club's first away defeat against a team starting the day bottom of the Premier League table since May 2004, having been unbeaten in 17 such occasions coming into the game. Benitez had run out of time and excuses. Dominic Calvert-Lewin was back in the side following his most recent relapse while Richarlison did have an impact off the bench, but the damage had already been done.

Against the league's bottom side, who had conceded the first goal in 16 games themselves this term, Benitez watched his players ship twice before they staged any form of response. For Evertonians, and for Benitez, it felt like Groundhog Day.

He may now reflect on his six months in charge and never be quite as irate as the club's supporters at the current situation, but the players must also take accountability.

After all, both of Norwich's goals were of Everton's own making, with Michael Keane's own goal coming 92 seconds before Ben Godfrey's poor pass contributed to Adam Idah making it two.

Everton have won just 19 points from their 19 league games this season - only twice previously have they had fewer at this stage of a Premier League campaign. Senior members of the squad must come forward and lead by example, but calls for Benitez to be relieved of his duties became too hard to ignore.

Everton have conceded the first goal in 16 of their 22 games in all competitions this season, including each of their last nine games.

Premier League Review: What next for Everton? | Man Utd's issues remain | Who are the contenders in the race for promotion?

In the latest Essential Football Podcast, host Alice Piper is joined by Ben Ransom, Nick Wright and Ron Walker to discuss another eventful weekend of Premier League football, while Simeon Gholam gives his analysis on the race to win promotion from the Championship.

PART ONE | Fresh from covering the news of Rafael Benitez's sacking at Everton, Ben Ransom brings us all the latest developments from Goodison Park. What went wrong for Benitez at Everton and what could be next for the Merseyside club?

PART TWO | Sky Sports football features writer Nick Wright and Sky Sports football writer Ron Walker go through the other big talking points from the weekend. Manchester United's issues remain after letting a two-goal lead slip at Aston Villa. The pair also give their views on the relegation battle after Norwich's win against Everton and Newcastle's draw with Watford, plus Man City's win against Chelsea and the postponements in the Premier league that are causing plenty of debate.

PART THREE | Finally, Alice Piper is joined by Sky Sports EFL editor Simeon Gholam to take a closer look at the race to reach the Premier League from the Championship. Who are the contenders and how is their form looking as we approach the business end of the season? Simeon gives his verdict...