Katoto is one of France's key attacking players, with 26 goals in 32 caps; the 27-year-old's injury follows similar knee setbacks for Spain's Alexia Putellas and Northern Ireland's Simone Magill; France are already through to the quarter-finals after two group-stage wins

France have been handed a serious blow to their Euro 2022 credentials with striker Marie-Antoinette Katoto set to miss the rest of the tournament after picking up a serious knee injury against Belgium.

Katoto, who is one of France's key players with 26 goals in 32 caps for her country, limped out of Thursday's 2-1 victory over Belgium in the first half and it has transpired she has damaged her meniscus and an internal ligament.

The injury blow is the latest in a string of long-term knee-related injuries suffered by players, with Spain's Alexia Putellas and Northern Ireland's Simone Magill suffering similar setbacks in recent weeks.

France have already qualified for the quarter-finals after two group-stage victories from two games, but they will have to navigate the knockout stages without their key player.

Corinne Diacre's side have an all-star attack at their disposal, with Katoto's club team-mates Sandy Baltimore and Kadidiatou Diani - who scored against Belgium - also in their squad.

Putellas could be out for a year with knee injury

Spain and Barcelona midfielder Putellas, the current Ballon d'Or holder, will miss nearly a year of football after undergoing surgery on a ligament tear.

The team announced last week that Putellas had injured her knee during a training session in the build-up to Euro 2022, a tournament they went into as one of the favourites.

"According to the club's medical services... Alexia Putellas has been successfully operated on Tuesday morning at the Hospital de Barcelona for the rupture of the anterior cruciate ligament," Barcelona said. "The estimated time of absence is between 10 and 12 months."

Spain will hope Putellas is fit in time for the women's World Cup, which begins in July next year in Australia and New Zealand.

Magill: I knew my Euros was over straight away 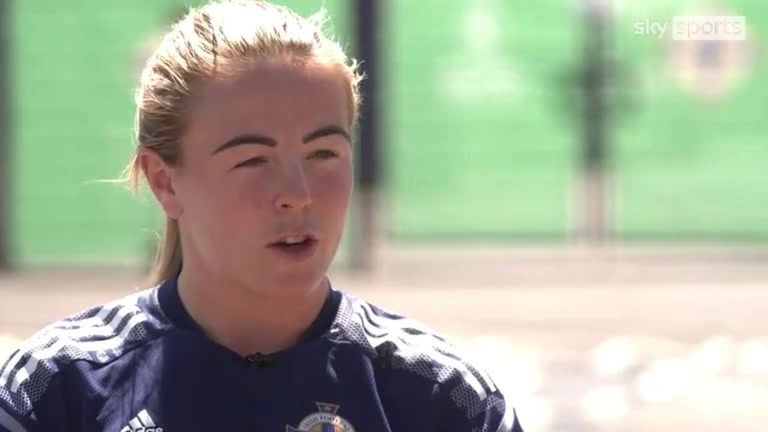 "I felt a bit of contact through the back and I've put my left leg out to try and stabilise and balance [me] but unfortunately the knee kind of buckled inwards and the ACL just ruptured from that. When it happened, I knew my tournament was over.

"The amount of times I'll go down in a game and I'll just bounce straight back up... whereas with this one I felt something go straight away and I knew it was serious. I had a good idea of what it was.

"I said to the medical team 'get me off' because I knew the severity of the situation and unfortunately I was right. I'm just trying to be positive about the whole situation, that's all I can do.