Which right-backs will England take to the World Cup with Trent Alexander-Arnold, Reece James and Kyle Walker injured?

Trent Alexander-Arnold, Kyle Walker and Reece James all picked up injuries weeks away from the World Cup; Alexander-Arnold made a surprise return to action against Man City, while Walker is touch-and-go to be fit in time; Kieran Trippier the other recognised right-back

By Sam Blitz and Adam Smith

It was the one area where England were best equipped - but football always provides us with a twist.

Over the past five years, England have been spoilt with a hefty amount of right-back options, with manager Gareth Southgate adopting a reputation for having an infatuation with players in that position.

"People say I have an obsession with right-backs, but I just see four very good footballers," said Southgate after he picked a quartet of options in that role before Euro 2020.

Going into this winter's World Cup in Qatar, there was little doubt about the personnel or the quality of options available at Southgate's disposal once again. But injuries to three of England's most-qualified options in that position, Trent Alexander-Arnold, Reece James and Kyle Walker, during this month have raised worrying concerns.

"It's staggering really, what's happened," said former England defender and Sky Sports pundit Gary Neville. "A few weeks ago, it's probably the strongest department and you're thinking one of those really talented right-backs may be left out. Now we're in trouble in that position.

"So I'm hopeful we can get at least two of them out of that three back fit again, because it would be a massive problem if they weren't. I think one or two of them will be fit."

So where do we stand with the three that are injured? Will the trio make the tournament? And who is on standby in the event that all or some are missing? Sky Sports answers all the important questions below...

The first of the right-backs to fall injured was Manchester City's Kyle Walker, who aggravated a long-standing groin injury during the 6-3 derby victory against Man United earlier in October.

Walker required surgery on the problem because the injury he sustained could not be managed while still playing due to the pace the City defender runs at.

Sky Sports News understands Walker and England are hopeful the 32-year-old will be fit in time to fly to Qatar - but the nature of the injury and the timeline in place means the situation is touch-and-go.

Walker is widely known to be a quick healer due to his recovery from past injuries but his availability for Qatar will largely depend on the speed at which he recovers. The next week or so will be crucial in learning whether Walker is on track, but City manager Pep Guardiola could not confirm whether the right-back will be fit in time for the tournament.

The City defender's role in the England squad is more crucial compared to his other right-back options due to his flexibility across different formations.

Walker has developed a reputation of juggling a back four role with City and a back three position with England in recent tournaments - while his pace is something that very few players, let alone defenders, can match this winter. Only Erling Haaland has clocked a faster speed at City in the Premier League this term.

Perhaps the most worrying injury concern at right-back is Chelsea's Reece James, who limped out of the Blues' 2-0 Champions League win at AC Milan in midweek.

The Blues have now confirmed James' knee setback is worse than first feared and he is expected to miss up to eight weeks of action, practically ruling him out of the entire tournament.

Should that come to pass, it would be a real shame as the 22-year-old has emerged as one of the Premier League's best players. The England international is also widely considered to balance defensive and attacking duties with greater efficiency than Alexander-Arnold.

Since becoming a regular at Chelsea in 2020/21, James ranks third among Premier League full-backs for goals and assists and frequently wins recoveries higher up the pitch.

Frequently deployed as a wing-back, the 22-year-old has also displayed considerable positional fluidity and can play in midfield - while the graphic above reveals his tendency to drift into central areas.

Southgate has used wing-backs in most recent England matches and James would have been a prime contender to start on the right of a back five in Qatar. The England manager is set to have a rethink for that position, with James' participation potential in serious doubt.

The Liverpool right-back was ruled out for two weeks after picking up an ankle problem in his side's 3-2 loss at Arsenal.

Alexander-Arnold missed Liverpool's game against Rangers, but made a quicker-than-anticipated return as a late substitute in the 1-0 win against Manchester City.

Alexander-Arnold has another eight games to impress Southgate before the England manager has to submit his final 26-man squad to FIFA ahead of the World Cup.

These eight games will be crucial for the 24-year-old's chances given the poor defensive form the Liverpool man was in before his injury.

Alexander-Arnold was strongly criticised for his defensive displays against Fulham, Manchester United and Napoli in August and September, before a horrendous start to October. The Liverpool right-back was at fault for all of Leandro Trossard's goals in the 3-3 draw with Brighton, before two goals went in on his side against Arsenal earlier this month.

There is also the question of where does Alexander-Arnold fit in with regards to the England set-up? The Liverpool defender has little to no club experience of playing as a wing-back, with Reece James and Kieran Trippier already ahead of him in that queue, while all of his four right-back rivals are more in form than him going into the tournament.

The 24-year-old does bring a lot to Liverpool and England's game from an attacking sense, which does counter his critics. This term, Alexander-Arnold has clocked 1.63 expected assists but failed to create a goal in the Premier League - which suggests the blame should rest elsewhere for his side's attacking struggles.

While his defending and positioning are often criticised, the right-back still registers impressive numbers for regaining possession in the defensive and final thirds, while his passing range and threat from set-pieces is arguably unrivalled.

However, the lack of defensive astuteness means his place in the 26-man squad is seriously under threat - even with James and Walker suffering more severe injury blows recently.

The triple injury concern leaves Kieran Trippier as the only recognisable right-back fully fit from Southgate's most recent England squad - and even the Newcastle man has a long history of injury woes which add further doubt.

But should he be fit for Qatar, Trippier ticks all the boxes of being an all-round player, while few players pose more of a threat from dead ball situations.

Compared to Alexander-Arnold, Trippier has shown this season that he can rival the Liverpool player in terms of attacking output.

The seasoned full-back has attempted a league-topping 82 crosses for Newcastle this term and ranks third in the division for expected assists, through-balls and passes in the final third.

There's defensive reliability from Trippier too - the 32-year-old is among the elite for regaining possession in the middle third - helping his side maintain the ball and he aids in preventing counters in Newcastle's new, advanced style under Eddie Howe.

Capable of playing right-back or left-back in a back four, as well as right wing-back should Southgate prefer a back five, do not be surprised if the England manager puts all his eggs into the reliable Trippier's basket.

So who is available on standby?

By far and away the prime standby candidate to come into the England fold in the event of a right-back injury is Ben White, who is excelling on the right of league leaders Arsenal's defence.

White's versatility makes him a classic 'Southgate player' when it comes to England - the manager has regularly picked and favoured players who can adopt multiple positions such as Walker, Trippier, Bukayo Saka and Raheem Sterling.

The Arsenal defender is naturally a centre-back but has been starring for the Gunners at right-back this term - while he can also feature at right centre-back in a three and - if needed - central midfield.

White's tactical game is diverse too. He started the season by adopting infield positions at right-back - but showed in recent matches against Tottenham and Liverpool that he can bomb forward around the outside of his right winger, this being England international Saka at Arsenal.

A part of the Euro 2020 squad two summers ago, White has some experience of being in a tournament football environment and - considering his last two England caps came in a right-back role - Southgate is facing real questions as to why the Arsenal defender is not in this autumn picture already.

Only two other right-backs have been selected by Southgate in the last 12 months - Southampton's Kyle Walker-Peters and Leicester full-back James Justin.

It's harder to compare the attacking qualities of full-backs from clubs currently battling at the wrong end of the table, but Justin certainly stands out at his club this term.

Formidable in the air, the 24-year-old has covered down both flanks and registered team-topping numbers for winning duels and blocking crosses.

But Justin also excels on the ball with only Harvey Barnes taking more touches on the ball or attempting more dribbles this season.

The only issue for Justin is that he is too similar in profile to Trippier in the way he can adopt both flanks - and with plenty of competition on those two areas, the 24-year-old seems too far down the queue for a realistic call-up.

As is the case with Justin, Walker-Peters' statistics are harder to contextualise with Southampton currently sat 17th in the table.

The radar below reveals an all-round effectiveness to his game, notably for attempting dribbles and crosses. 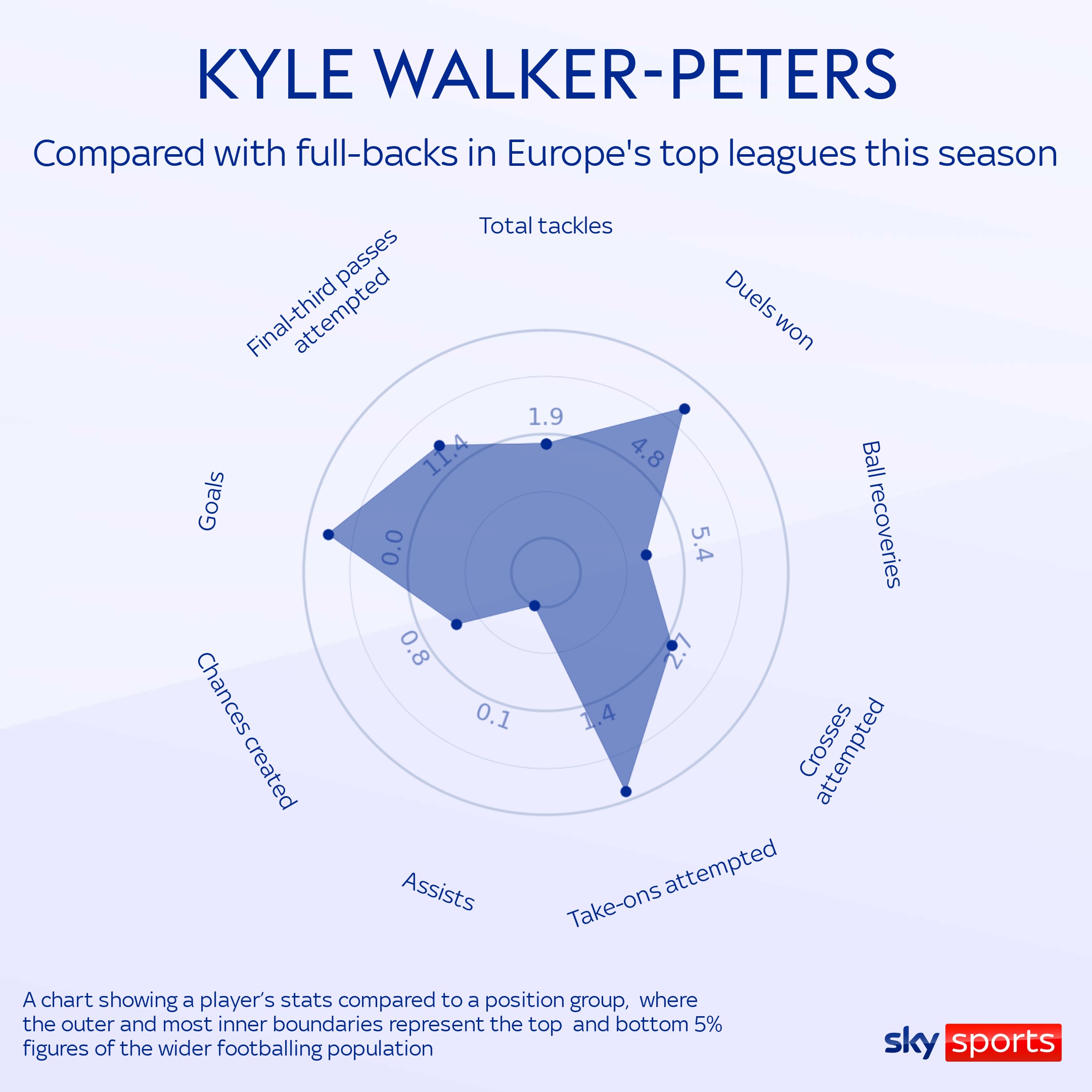 Based on historical returns, his high reading for goalscoring is arguably skewed due to the limited number of games so far - currently boosted by his solitary goal against Leeds in August.

However, the 25-year-old has proven his defensive attributes over the years and his above-average returns for winning duels exemplifies this best.