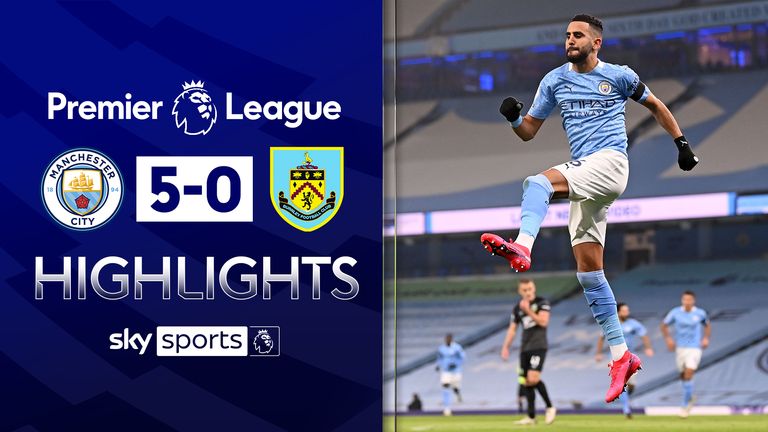 FREE TO WATCH: Highlights from Manchester City’s win over Burnley in the Premier League

Riyad Mahrez scored a hat-trick as Manchester City steamrolled Burnley 5-0 in their finest performance of the season so far.

The winger fired the hosts into a sixth-minute lead from a flowing move which would encapsulate City's performance against woeful Burnley, who would go on to suffer their fourth successive 5-0 defeat at the Etihad.

Mahrez netted his second midway through the half from a poorly-defended throw-in, and Benjamin Mendy weighed in with his first Premier League goal shortly before the interval with a smartly-timed volley from a tight angle.

🔵 Pep Guardiola has reached the milestone of 1,000 league points in his senior managerial career (1,002)

After the break, Ferran Torres fired in from close-range before Mahrez completed his hat-trick with a header from Phil Foden's cross.

City's win lifts them into the top half of the Premier League and back within three points of Chelsea in third, while Burnley are five points off Brighton, the next team ahead of them, and remain 17th.

Man of the match: Riyad Mahrez

City give Burnley the feeling of deja vu

Pep Guardiola had a full squad to choose from against a Burnley side buoyed by their first win of the season against Crystal Palace on Monday night - but the spring in Sean Dyche's step did not last long.

It took only six minutes for Mahrez to take Kevin De Bruyne's perfect pass in his stride before stroking the ball past stand-in goalkeeper Bailey Peacock-Farrell to maintain his scoring run against the Clarets.

The last time the two sides met, Mahrez scored twice - and midway through the opening period, he had already matched that tally from a move which would make Dyche wince. Kyle Walker's throw-in was missed altogether by Charlie Taylor allowing Mahrez space to cut back and beat Peacock-Farrell from a tight angle.

That goal was a rarity in being City's first in the league from a throw-in since April 2016, but, for the most part, the rest of their victory was immensely familiar.

Before half-time Mendy added a third with City back to their fluent best. Of course, it was from De Bruyne's pinpoint delivery to find the defender, whose cushioned volley from the left was perfectly placed to nestle in the far corner.

Game over, near enough. Burnley did manage one moment of note on the hour mark when Jay Rodriguez's low effort became their first shot on target at the Etihad since January 2017, but soon normal service was resumed as Torres rolled in a fourth from close range.

Mahrez completed his hat-trick shortly afterwards as Foden teed him up moments after coming on as a sub, with his well-placed header securing him his first match ball in a City shirt.

The hosts thought they had exceeded their tally from their last meeting with the Clarets when Peacock-Farrell's painful day appeared to get worse as his knee turned the ball into his own net after diving on a low cross, but VAR ruled out the goal for a marginal offside against Gabriel Jesus.

From there, the final 20 minutes played out like a training game with City having flexed their scoring muscles, and Burnley praying for the full-time whistle.

Man of the match - Riyad Mahrez

What more can you say? He is like a moth to a lightbulb every time Burnley come to town. Five in two games at the Etihad against Sean Dyche's men now, and a first hat-trick in Manchester City colours.

That is not all Mahrez produced, though - he also made more key passes than anyone else on the pitch. A sparkling performance.

Man City boss Pep Guardiola: "The problem is the players lose the joy of playing football.

"Before it was nice playing once or twice a week with spectators. Now it's three days and then another one. We will travel to Porto to win, then prepare against Fulham."

On importance of response from last week's defeat by Tottenham: "It was important to come back with a victory in the Premier League. One more game.

"We play a lot of games so to play 90 minutes and maintain a good level is not easy but there are always things to improve on.

"It's important for our people to score goals and it is a chance for them to keep playing."

On Sergio Aguero's absence: "Sometimes it is just a reaction on the knee. It is swollen. Hopefully tomorrow he can come back to training.

"Now it is three days then another one. We have to travel and prepare fully."

Burnley manager Sean Dyche: "You can't start a game with a game plan then throw it out of the window with a mistake that early against these. Here, it is really tough then. They use the ball so well and there's movement everywhere, so it becomes a tough afternoon, which it was.

"We played into their hands. We played a short pass which wasn't needed. We wanted to put it on top of them, but we didn't do it. When they turn up, you probably aren't going to win a game, but I expected more from this group."

Manchester City face a Champions League trip to Porto on Tuesday night; kick-off at 8pm. They then host Fulham next Saturday; kick-off at 3pm.

Burnley are back in action next Saturday, hosting Everton at Turf Moor; kick-off at 12.30pm.