Alan Smith: Pierre-Emerick Aubameyang's drop may be a symptom of Arsenal form

Pierre-Emerick Aubameyang's drop may be a symptom of Arsenal's form, insists Alan Smith, but Tottenham is a "good fixture" for the Gunners.

Aubameyang has scored just two Premier League goals this season, with Arsenal struggling in 14th place with 13 points from 10 games ahead of the north London derby on Super Sunday, live on Sky Sports.

The Gabon forward has been brought in from the left wing in the last two Premier League games, but had just 23 touches in the 2-1 defeat by Wolves on Sunday, and just three touches in the box in the 0-0 draw with Leeds the previous week.

So, what has gone wrong for Aubameyang since he signed a new contract at Arsenal in September? Is the team impacting Aubameyang, or is it the other way around? And would a return for Mesut Ozil after January help?

Left or central, Auba can shine

He's only human. He comes across as a really happy guy, whose confidence would be difficult to knock. He has great confidence in his ability. But you can see he has been affected by his overall game. He's been lacklustre.

In an effort to try and change things, they've put him through the middle. I don't think he's necessarily always suited to playing through the middle; when the team is functioning properly, and he's coming in from the left, he can find space easier from that position. But I can see why they'd try through the middle, because they're trying everything at the moment.

Some people point to him signing his new bumper contract and his form falling off the edge of a cliff, but I'd be reluctant to say that has been an influence. He does strike me as someone who lives for goals, but I'd be surprised if he's eased off because he's signed his new contract. 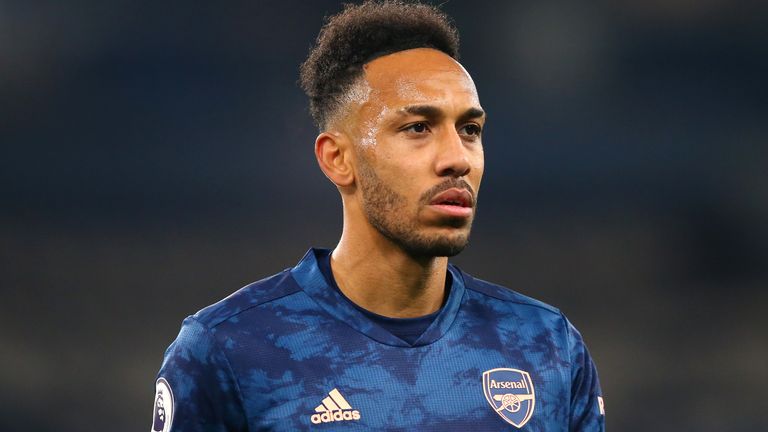 His form is a symptom of Arsenal's lack of form going forward. Mikel Arteta had to change the way they played, he had to make them more robust, harder to play against, more solid at the back.

Wherever Arsenal are on the pitch, they always make sure that should they lose the ball, they are not exposed. They've always got that in mind. Arteta works quite hard on that in training. And yes, it's taken away some of that joie de vivre, if you like, that Arsenal have always been associated with going forward.

Alexandre Lacazette has been suffering, Willian hasn't reproduced his Chelsea form, Nicolas Pepe is hot and cold. It has been a combination of things.

Aubameyang and Lacazette are great pals off the pitch. He's looked laboured, almost looked not fit enough, but I've been through a spell like that, and when confidence is low you can't run like you do when you're playing well.

And when you're not scoring goals it does have an effect on your physical output.

He's looked a shadow of the player that he was a couple of seasons ago. That's another problem, because Eddie Nketiah is a young boy with a great nose for goal, but he's not ready to be leading the line week in, week out. It will be handy when they get Gabriel Martinelli back, as he showed great signs before his injury, and he can play in a couple of positions.

If Lacazette can get going again, that can help Aubameyang. If he's on form, you can make runs off him with more commitment, knowing that he's going to hold it up and find you.

People shout 'Ozil', but I can't see him returning

It's about getting the ball to Aubameyang quickly, and people who can see the pass early. That's why people go on about Ozil constantly, as he is the type who could do that. Arsenal were after a creative player in the window - Houssem Aouar - and they couldn't quite manage to get him along with Thomas Partey.

But there is a lack of creativity, even before this bad run began, you could see that in the wins over Sheffield United and West Ham.

Do I see Ozil returning to the team? No, I can't see it. Too much has gone on behind the scenes for Arteta to be able to trust him again. I think he feels he's been let down by Ozil at times, where the player has not been available when he thought he would be.

If you don't trust a player, it's a big problem. It was a big thing to do not to put him in the squad, a huge statement, and I just can't see him coming back into the frame.

It's a big test for Arteta. He's a young manager who hasn't had to deal with these type of problems before, where he's got the last word and responsibility on his shoulders. It's totally different being a sidekick to somebody like Pep Guardiola, no matter how much work you do on the training ground.

He's bound to make mistakes along the way, as good a coach as I think he is. It's a real test for him at the moment, and he must be scratching his head to think of a way of getting out of this run.

Spurs a good fixture for Arsenal

You've just got to keep plugging away, making the runs, getting into goalscoring positions, and the goal will come. I actually think the derby is a good fixture for Arsenal. I think they'll raise their game, and if they can get a win, it would do them the power of good.

If Aubameyang can get a goal, you'd hope he'd be off and running, and that would give the team a lift to play better football. It's about making that first step.

How many times have we gone into these games and the composite XI has all been Tottenham or all been Arsenal. This time it would mainly be Tottenham players but the result doesn't always match it. You just don't know.