West Brom manager Sam Allardyce proposes temporary suspension of football to act as 'circuit breaker' to combat rise in Covid cases; Premier League recorded its highest number of positive tests in weekly testing; A number of EFL fixtures have been postponed due to outbreaks at clubs Sam Allardyce has revealed West Brom had a positive coronavirus test this week and has called for a break in football action to combat rising cases in the game.

The Premier League announced its highest number of positive cases on Tuesday since it began weekly testing in May, with 18 out of 1,479 tests coming back positive.

Manchester City's game at Everton on Monday was postponed four hours before kick-off due to an outbreak at City, while Fulham's game at Tottenham on Wednesday is in doubt due to positive cases in the Cottagers' squad.

The English Football League (EFL) has also been severely hit by fixture postponements due to coronavirus outbreaks at clubs.

It is understood there are no plans for the Premier League to pause the current season, but Allardyce, speaking after West Brom's 5-0 home loss to Leeds United, said: "Everyone's safety is more important than anything else.

Speaking after Manchester United's 1-0 win over Wolves on Tuesday night, Ole Gunnar Solskjaer questioned the logistics of implementing a two-week break in an already packed Premier League schedule - with the European Championships looming large next summer to avoid the season being extended as it was in 2019/20. 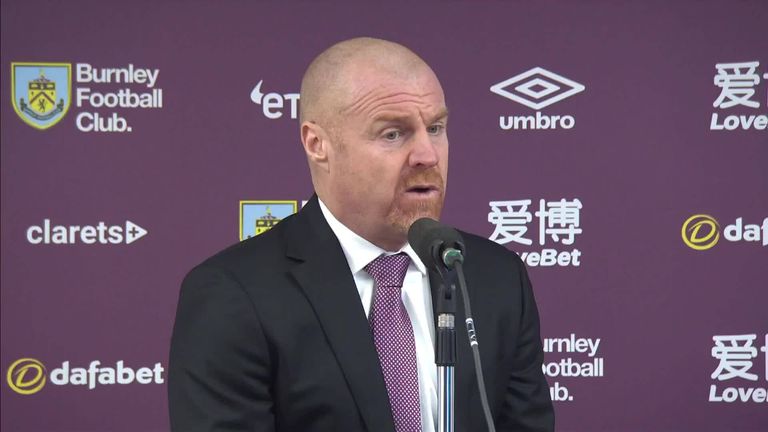 Sean Dyche insists Burnley are abiding by strict coronavirus protocols but says it is hard to control what goes on away from the club, amid concerns over a spike in cases

Burnley manager Sean Dyche is confident his players are working within "very strict" protocols to limit the spread of coronavirus when they are with the club but that they still have to "live their lives" away from football.

"We've got protocols in place and everyone has tried to align with the protocols," said Dyche. "But that doesn't stop everything - you've still got to put your hand on a keypad or whatever when you get petrol.

"They have families and we are told that it (the virus) is everywhere so we can only stay within the guidelines, I just hope it stays outside of football as best it can. If the numbers keep rising we'll have to deal with that accordingly." Graham Potter says Brighton will do 'whatever people think is right', including a potential break in Premier League action, if coronavirus cases continue to rise

Blades boss Chris Wilder revealed ahead of their 1-0 defeat at Burnley that the club had seen "a couple" of players and "four or five backroom staff" test positive.

Wilder's starting line-up was unaffected, with just one change from the previous match, Oliver Burke dropping to the bench, but he was only able to name seven of a possible nine substitutes.

Wilder said neither he nor the club had looked to have the game delayed. The Premier League board took medical advice into consideration when making the decision to postpone City's game against Everton. Decisions to rearrange games are only in "exceptional" circumstances and judged on "case-by-case basis", says the Premier League, which maintains its medical protocols are robust.