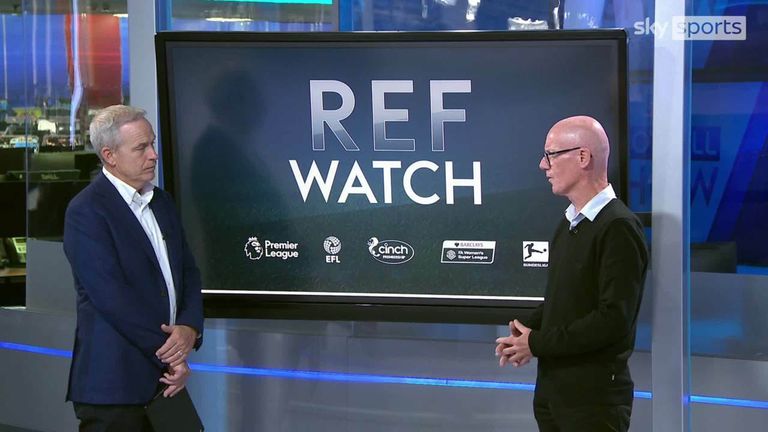 INCIDENT: Fifteen minutes into the second half, Pascal Struijk makes a challenge from behind on Harvey Elliott and falls down on the Liverpool midfielder, which results in a horrific ankle-breaking injury.

DERMOT SAYS: "What I would say from the outset is, I don't think Struijk had any intention whatsoever to cause any injury to this boy. I make that very clear. It was a very unfortunate injury, but I think the referee sees that challenge: Struijk goes in from behind, and then the outcome of it.

"You've got to be very careful to keep the two separate, but, in this instance, you look at it and the result and it's very difficult to say it isn't a red card for that injury.

"You could see how serious the injury was because there were no replays shown, I had to look at a feed from elsewhere to see the tackle again. You see what happens, the way the player reacted - you knew how serious it was.

"The red card was an on-field decision, although the free-kick wasn't initially given. The fourth official was close by and he would have fed in, and that's a great thing about the earpiece right now. The referees are connected up. The input from all was, 'We feel this is a red card', and a red card was given.

"When you see that challenge from behind. The law says: does he endanger the safety of the opponent. Well, the outcome would certainly say yes. Did he mean to? Most certainly not. And that's the balance here and the dilemma the referee had. I think the referee has a very difficult job not to give a red card when you see the extent of the injury."

SECOND INCIDENT: Fabinho scores with Sadio Mane standing near the goalline in an offside position.

DERMOT SAYS: "If you look at where the goalkeeper is, the ball actually goes through Luke Ayling's legs. Line of vision - was the player impeding the goalkeeper's line of sight? No. The players are apart. I think he is in [the goalkeeper's] peripheral vision, not in his direct vision and that's why the goal was given."

Dermot on David Busst injury in 1996

Gallagher was officiating when Coventry defender David Busst broke his leg against Manchester United in the Premier League in 1996 and the event still haunts the former referee to this day.

"Craig Pawson had another half-hour to go [after the Eliott incident] and I think the thing with the headsets now, the officials can keep feeding to the referee's ear, 'That's it, you've got through another five minutes', and it's almost like you break the game down. My incident was 81 seconds into the game so there was a whole match to go.

"The only thing I'd say about that moment: everything I've done in my life, every experience I've ever had, if I could change one thing, just one thing, it would be that I didn't kick off that game, that day - that's how horrific it was. But it happened and you have to deal with it and you have to move on, which I had to learn to do."

DERMOT SAYS: "It's very interesting. This incident and the one at West Ham. Two players coming into a confrontation, both get yellow cards, which I think is right.

DERMOT SAYS: "It has to be handball. We talked pre-season about narrowing the grey areas and what would be given and what wouldn't.

"It's the fact his arm is so far out, and you see that, it's very, very difficult to say 'no penalty' - especially after they brought the margins in so there would be less debate. If the arms are out, it's going to be punished - and it was."

INCIDENT: Michail Antonio is shown a second yellow card after an initial melee with Jack Stephens and is followed with a rash challenge shortly after on Moussa Djenepo.

DERMOT SAYS: "I think this falls exactly into that bracket asked for: consistency. There's a tangle between the two players. They both end up squabbling and with yellow cards, which I think is right.

"It is so similar [to the Zaha and Tanganga incident]. Antonio then does almost exactly what Tanganga does as well - he trails a leg, lunges in and gets a second yellow card. It's total consistency."

INCIDENT: Arsenal goal is allowed after the ball hits Bakayo Saka's arm in the build-up and Pierre-Emerick Aubameyang appears to be offside when striking the ball into the empty net.

DERMOT SAYS: "It does strike Saka's hand, but I think that's all it does. It flies up off the Norwich player and strikes his arm. I wasn't too concerned about that because it doesn't fall into what the new law is. It strikes him and they play on - it doesn't go directly to a player that scores, and he doesn't score - the game goes on.

INCIDENT: Jamie Vardy breaks through Manchester City's high line in customary style and scores - but the assistant flags for offside.

DERMOT SAYS: "It was tight, but it was also given offside as an on-field decison, which I think was really good. The assistant waits, the ball goes into the net, then the assistant flags. VAR checks it because the play has stopped and he was just offside. A very, very good decision."

INCIDENT: Tottenham's winner appeared to strike Rosella Ayane's hand, but, with no VAR, the goal stood.

DERMOT'S VERDICT: Incorrect decision: goal should have been disallowed.

DERMOT SAYS: "It is handball. Warning bells start ringing if you see a forward going through the air with both arms out. Why does she have her hands up there? It strikes her arm and goes in off Steph Houghton for an own goal."