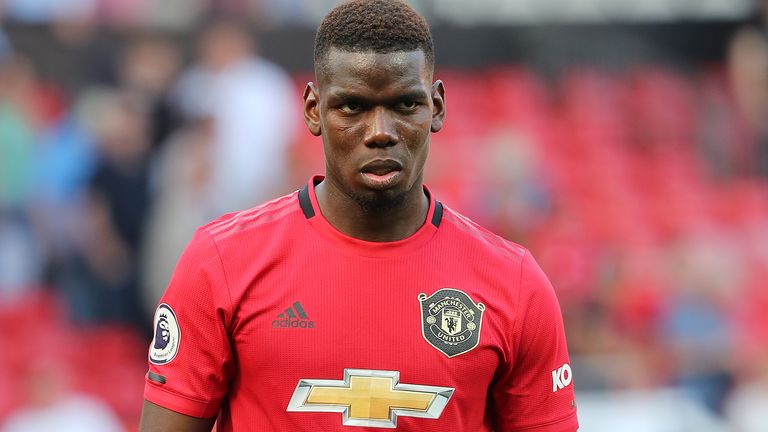 Ole Gunnar Solskjaer is concerned that Manchester United could fall behind in the top-four race after injuries to Paul Pogba and Anthony Martial ahead of Saturday's game against Leicester (3pm).

Both Aaron Wan-Bissaka and Jesse Lingard are also doubtful, with Luke Shaw and Diogo Dalot already out.

Brendan Rodgers' side travel to Old Trafford on Saturday with their own intentions of qualifying for next season's Champions League.

Solskjaer talked up the Foxes' credentials while insisting that United can now not afford to fall behind Leicester, or other top-four rivals including Tottenham, Chelsea and Arsenal.

"Leicester is always a tough game. It's a team and a club that is wanting to push for the top four I'm sure," he said. "They have got good players and a very good manager, that's a proven top manager. "Brendan's teams always play good football and we will have to play well to deserve three points. We want to get the results we feel we deserve. We are coming into a busy period now, we don't want to be behind Tottenham or Chelsea or Arsenal.

When asked if Leicester are on the same level as United now, Solskjaer replied: "I don't want to talk too much about Leicester.

"I see them as a good team but Man Utd is the biggest and best club in the world. I'm sure they want to get into the top four like we do. It's a great test and a great challenge. For our players who want to push closer to City and Liverpool, here's your chance."

Martial and Pogba out, Lingard and Wan-Bissaka in contention

Solskjaer confirmed that both Martial and Pogba will miss Saturday's visit of Leicester with injury, but both could make their return when United face West Ham United next weekend, live on Sky Sports Premier League.

Lingard and Wan-Bissaka will face late fitness tests after the pair withdrew from England duty this week with injuries.

"The treatment room has been busy and still is," he said. "We don't really know who is going to be available. Maybe Aaron, maybe Jesse and that's it from the ones that had to pull out but I can't promise those two will be fit either."

"Pogba won't be fit unless he's had a miraculous recovery overnight. He's not been ready to train at 100 per cent.

"We hope more can be ready for West Ham, Paul and Anthony are in that category. I think they will be ready for then. I can't say more than that."

'Having taken just five points from their opening four games, this headache couldn't have come at a worse time for Manchester United.

'Solskjaer's overhaul of United in the summer focused mainly on outgoings, some of whom they could do with this weekend.

'With Pogba, Martial and Shaw out, and Lingard and Wan-Bissaka doubtful, it is likely Nemanja Matic will line up alongside Scott McTominay and one of Andreas Pereira or Juan Mata.

Minutes this season for Manchester United

'At right-back, either Axel Tuanzebe or Timothy Fosu-Mensah could cover Wan-Bissaka, with Ashley Young already covering Shaw on the left, and in the front line, Marcus Rashford is likely to be flanked by Daniel James and one of Mason Greenwood or Mata.

'Only one of the potential replacements - Pereira - has played over 100 minutes this season out of a possible 360. Fosu-Mensah and Tuanzebe have no minutes, while Matic has just 22 and Greenwood 47.

'Against a Leicester side sitting third and unbeaten, defeat here could leave United five points off the top four before the first European week, and with only one top-six opponent ticked off the fixture list.'

Ole: I want De Gea to retire at Utd The United boss also reiterated his desire for David de Gea to remain at the club beyond this season.

The Spaniard will be out of contract at Old Trafford at the end of the campaign and will be free to enter pre-contract talks with clubs from abroad from January 1.

"I want David to stay here, he knows that. For me, David is the best goalkeeper in the world.

"We have seen that over the years. I hope I can make sure that he will finish his career at United at the highest level.

"There have been loads of talks and discussions between David and the club and hopefully we can get it done."

Sky Sports News understands the Spain 'keeper was in talks over a new deal with United over the summer and was offered between £350,000 and £375,000 per week to remain at Old Trafford.

Follow Manchester United vs Leicester with our dedicated live blog, and you can watch the Premier League highlights just after the full-time whistle for free and without being a Sky Sports subscriber.