Erik ten Hag is expected to be in the stands at Selhurst Park as Man United take on Crystal Palace this Sunday; Ralf Rangnick has confirmed discussions have taken place via WhatsApp ahead of a formal meeting; Ten Hag will appoint Steve McClaren and Mitchell van der Gaag as backroom staff 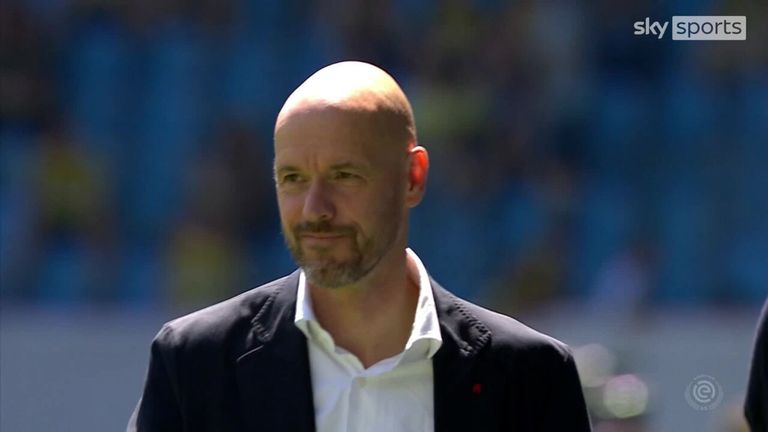 Ralf Rangnick has been in contact with incoming Manchester United manager Erik ten Hag ahead of his final game in charge on Sunday against Crystal Palace, which the Dutchman is due to attend.

Rangnick, who will be replaced by Ten Hag at Old Trafford, confirmed dialogue has taken place via WhatsApp but the pair are yet to meet in person.

The former Ajax manager was spotted at the club's Mayfair offices on Thursday, alongside Steve McClaren and Mitchell van der Gaag, who will jointly be tasked with assisting Ten Hag's new-look regime in Manchester.

Speaking at his final United press conference, before this Sunday's trip to Selhurst Park, Rangnick said: "We've been in contact, via WhatsApp. We hopefully will have the opportunity to speak and meet in person, either at the weekend or on Monday, at the latest. I'm looking forward to getting to know him in person."

Ten Hag has reportedly made the appointments of Van der Gaag and McClaren - who served as an assistant under Sir Alex Ferguson at United during 1999-2001 - a priority.

United head to south London on the final day of the Premier League season knowing they have to match West Ham's result to avoid falling into the Europa Conference League.

Rangnick's sixth-placed side are two points better off but have a far worse goal difference, which was further damaged by last weekend's 4-0 thrashing at the hands of Brighton.

"I'm positive the players want to get something right. I know they would much rather play in the Europa League than in the Conference League next season. This should be an incentive, to make sure we qualify for Europa League on Sunday."

Rangnick has previously been outspoken on the issues facing United, admitting the club requires major change before they can once again challenge for major honours.

"I still strongly believe that there is a core of players who are top, who are well worth and good enough to play for this club and hopefully most of those players will still be here next season," he added.

"If the board, Erik, the scouting department - and I will help them with all the issues that I can help them - if we bring in the right mentality players, the right quality players, I'm positive that we will be able to bring this club back not only on track but also back to the top.

"This is what it's all about in the next couple of weeks. Maybe it will not happen or be possible in one transfer window but I'm very positive that it can happen in the next two or three windows."

United would prefer a permanent deal for the 24-year-old but will not rule out a loan - provided it comes with an obligation to buy.

Wan-Bissaka has enjoyed a mixed time at United since being signed for £50m by Ole Gunnar Solskjaer from Crystal Palace in 2019.

He was the first-choice right-back during Solskjaer's reign but has faced increased competition from Diogo Dalot under interim boss Ralf Rangnick.