Watch Chelsea vs Manchester United on Monday Night Football from 7pm on Sky Sports Premier League; kick-off is at 8pm. 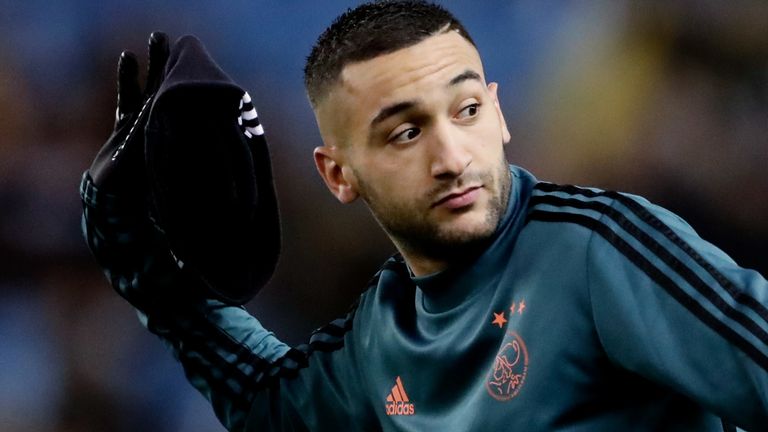 Frank Lampard hopes Hakim Ziyech can add a new dimension to Chelsea’s attack next season, once he completes his move from Ajax this summer

The 26-year-old Morocco international was signed from Ajax on Thursday for £33.3m and will move to Stamford Bridge at the end of the season.

Chelsea have struggled to break down opponents who sit deep against them this season. Since November, they have dominated possession but failed to score in games against West Ham, Bournemouth, Southampton and Newcastle.

Lampard is hoping the arrival of Ziyech - who has an impressive 21 assists in 30 appearances this campaign - can change that, telling Sky Sports News: "I think he's a fantastic player.

"He first came into my eye-line in their [Ajax's] run in the Champions League last year. I thought he was one of their standout players, particularly in their games against Tottenham.

"We've come up against them twice this season so I know a lot about him. I know about his qualities. He's got a great left foot and plays generally off the right-hand side but can play behind the front man.

"Probably when you look at us this season there have been games where we may have maybe struggled to unlock the door. He's certainly a player we hope can bring that bit of creativity and something different for us.

"He scores goals, assists. I know it's not coming now but I think it's exciting for us as a club and the fans to know that he'll be here next year."

Ziyech was one of Lampard's top targets during a frustrating January transfer window which ended with Chelsea not adding any new players to their squad.

Ajax were not keen to lose one of their key players mid-season as they chase success in the Eredivisie, Dutch Cup and Europa League.

Lampard said: "We tried but it wasn't possible. We all know how the January window works.

"You respect that clubs who have top players want to keep them. But that's done and now we have him for next season."

Ziyech is the first signing Chelsea have made since Lampard became head coach in the summer, and he hinted there could be more to follow at the end of the campaign.

"We have to worry first about where we're at," he said. "Trying to come in the top four is the priority for us so my main concern is that.

"But we're always on the lookout and we're always working together to see how we can improve. Those improvements could be needed maybe in the summer and we'll try to make sure we get the right ones."

Hakim Ziyech's arrival will not have an impact on the futures of Willian or Pedro, says Lampard, despite both players' contracts expiring at the end of the season.

A creative attacking midfielder capable of operating out wide or behind a striker, Ziyech plays in a similar position to the duo.

But Lampard said: "Conversations are ongoing with both players. I think we've bought in a quality player who can play in various positions, but it doesn't have a one-one-one effect on any player."

The head coach also said Ziyech's likely unavailability at the beginning of next year due to Morocco's probable participation in the 2021 African Cup of Nations was not enough to put him off the deal.

"I'm aware of it," explained Lampard. "It obviously didn't feature because we're bringing him to the club. I see a bigger picture than that.

"I do think there's a bit of an issue with the cup being held in those months and how it affects the major leagues in Europe. But at the same time we're signing a player for the long-term vision and plan."

Lampard also revealed he has decided who will start in goal when Chelsea welcome top-four rivals Manchester United to Stamford Bridge on Monday, live on Sky Sports. No 1 Kepa Arrizabalaga was dropped for Willy Caballero in the Blues' previous match against Leicester but has been praised for his reaction by the boss.

Lampard said: "I have to pick the team on form in every position, so it was just the selection on that day. I know with goalkeepers there's a bit more to it than that - we know it's a slightly different role to everybody else.

"I want everybody's reaction all the time to be spot on. He came out the team - I know what that means and how that will feel for him. I had it in my career many a time.

"It's part and parcel of being a footballer and you have to show character in those moments. I've been pleased with the reaction."