Arsenal are confident of signing Pepe from Lille after agreeing a £72m fee for the winger, according to Sky in Italy Arsenal boss Unai Emery has said the club are working on deals, after reports they have agreed a £72m deal for Lille forward Nicolas Pepe

Unai Emery has remained coy on Arsenal's links to Nicolas Pepe and inferred he has several options on the table when asked about the Lille winger.

Arsenal are confident of signing Pepe from Lille after agreeing a £72m fee for the winger, according to Sky in Italy, with Emery also insisting he only wants players to improve the squad and provide different options.

Lille president Gerard Lopez confirmed on Friday that Napoli had agreed a deal for the 24-year-old winger, but Arsenal appear to have trumped the Italian side by offering superior terms.

After their 2-1 friendly defeat to Lyon on Sunday, Emery only spoke of Pepe directly to say he was a very good player, and says hard work is going on behind-the-scenes ahead of the Premier League season kick off at Newcastle on August 11, live on Sky Sports Premier League at 2pm. 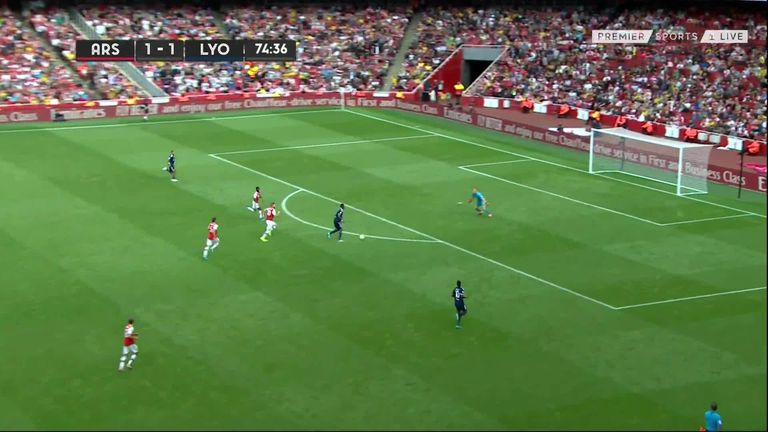 Highlights of Arsenal's 2-1 defeat to Lyon in the Emirates Cup. Pictures: Premier Sports

Asked about the Pepe reports, Emery said: "We are working and thinking about how we can improve. There are different players on the table, with the possibility [of signing] if we can.

"Pepe is a very good player, and also we are thinking only of players that will improve this squad, and also give us some different conditions to improve.

"We are working for the last eight weeks, and before the first game of the season to get the best team together with the best players in our squad."

Arsenal had previously appeared to be favourites to sign Crystal Palace's Wilfried Zaha, but Everton have made a £55m bid to sign the winger, Sky Sports News understands.

Mesut Ozil and Sead Kolasinac were rested for the defeat by Lyon just days after they were confronted by a knife-wielding gang, and Emery confirmed neither were "100 per cent here" and need more time to feel calm and safe.

"They are very important in the team, but also each moment and some circumstance give us that decision, between the player and us, is not the good moment to play, because their mind is not now 100 per cent here, and is a very personal circumstance.

"The most important thing now is that they can feel good, can feel safe, can feel with their family calm, and they came this morning but after I spoke with them we decided it is best to continue resting with the family and waiting hopefully for a few days to come and start normally with the team."